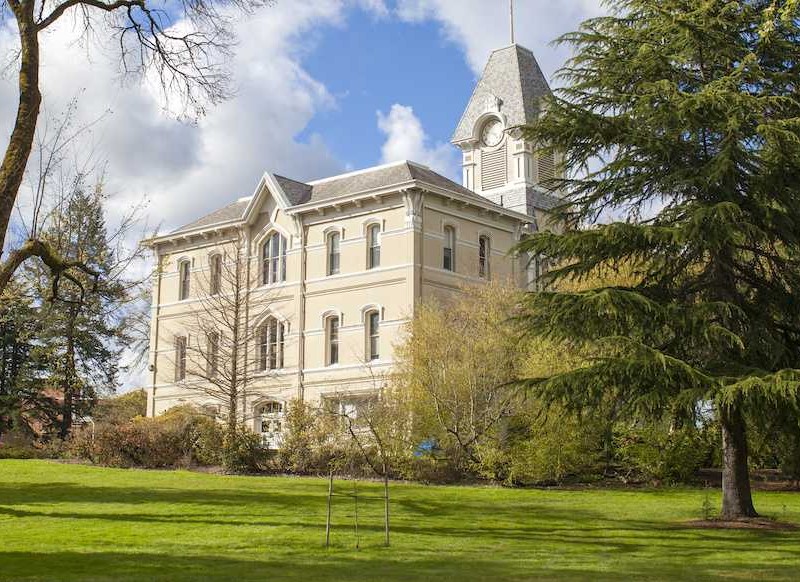 The university was born with the laying of the cornerstone for the Administration Building on Corvallis’ “College Hill” in 1887. This was the first building on campus, and was completed in July 1888 and the college moved in early fall. Architect Wilbur R. Boothby, of Salem, designed it. This building originally housed everything - all the college’s classrooms, administrative offices and lab space. The library was there until 1918 and the president’s office until 1923. Today, melodies drift from the music department, a resident since 1916. The modern-day clock tower was installed during the university's centennial - until that time the face was painted on. Known as Benton Hall since 1947, it was named after the people of Benton County in appreciation of their funding of its construction. Benton County is named for Thomas Hart Benton, a United States Senator from Missouri, and a staunch advocate of westward expansion of the United States. After a two-year process to evaluate the names of several buildings on OSU’s Corvallis campus that involved hundreds of students, employees, alumni and university stakeholders, Oregon State President Ed Ray decided to change the building’s name in November 2017 to a new name that appropriately recognizes the many contributions of Benton County community residents to create the college in the 1860s and 70s. The new name for this building is Community Hall.

Namesake Controversy and Resolution: A team of OSU faculty including researchers, professors, and archivists came together in 2017 to deliberate over several building names that students had called into question due to controversial namesakes. These building names were researched in depth by the Building Names Committee, and resolutions were found for each one. In the case of Benton Hall, its name was changed to Community Hall, to better reflect the support of the community in the Corvallis area who helped erect the building in 1888.

Oregon Digital: As the cornerstone of the Corvallis OSU Campus, Community Hall has been one of the best photographed buildings. A search on Oregon Digital produces 712 results, many of which are historic pictures of the building, in which one can see campus growing and changing around it.

SCARC: The Special Collections and Archives Research Center holds a multitude of information about Community Hall. A search of "Benton Hall" produces 50 matches of different variety, such as maps, manuscripts, films, and photographs. Of note is the Memorabilia Collection, box 25.9-25.10, which includes newspaper clippings, an 1882 Telegram, an 1887 Cornerstone Ceremony invitation, 1918 building plans, correspondence, reports, and student history papers about the building.