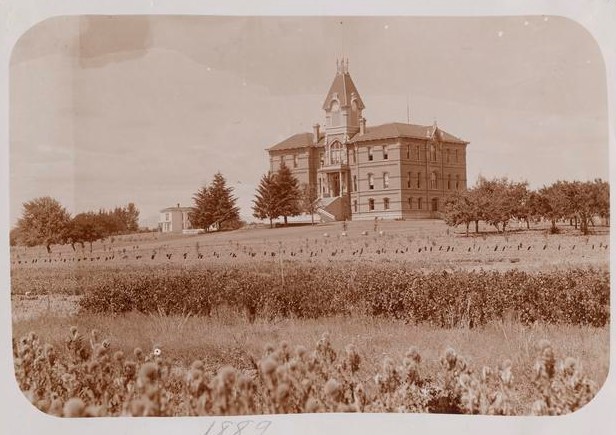 Situated on a gentle slope called "College Hill" just west of downtown Corvallis, present-day Oregon State University was born with the laying of the cornerstone for the Administration Building in 1887. On July 2, 1888, Oregon's governor, Sylvester Pennoyer, accepted the new Administration Building (later renamed Benton Hall; present-day Community Hall) and property for the state as a gift of the citizens of Corvallis and Benton County. The first classes were held in the building in the fall of 1888.

Designed by architect Wilbur R. Boothby, of Salem, and costing $25,000 to construct, the building originally housed everything - from all the college’s classrooms, to administrative offices and laboratory space. Materials comprising the College's library were housed there until 1918, and the President’s Office resided there until 1923. The Music Department took up residence in 1916, and is the building's sole remaining tenant.

The modern-day clock tower was installed during the university's centennial; until that time the face was painted on. The Administration Building was renamed Benton Hall in 1947.

SCARC: The Special Collections and Archives Research Center's holdings include a wide variety of collections documenting the history of the Administration Building, including personal papers, photographs, and university records.