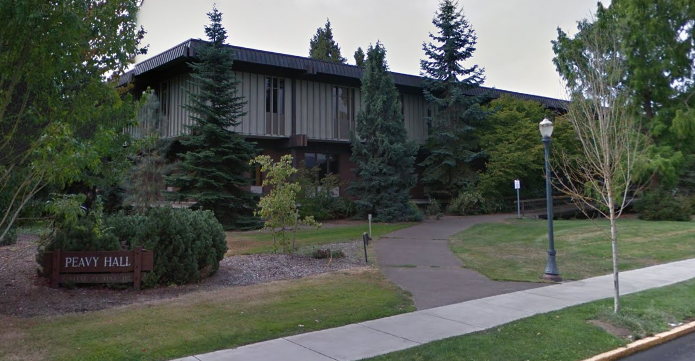 Named in honor of Forestry's first Dean and the seventh President of the University George W. Peavy, Peavy Hall, along with the adjoining Richardson Hall, is home to the College of Forestry and the Oregon Forest Research Laboratory. What was then referred to as the School of Forestry moved into Peavy Hall upon its completion in 1971.

In 2016, construction began on a suite of buildings that would replace Peavy and Richardson Halls. The Oregon Forest Science Complex - comprised of the George W. Peavy Forest Science Center (PFSC) and the A.A. "Red" Emmerson Advanced Wood Products Laboratory (AWP) - occupies the same location as the original Peavy Hall, and areas of the existing Richardson Hall support the new Peavy Hall.

Not to be confused with an earlier Peavy Hall, a wing of the Central Hall dormitory complex that was constructed in the 1940s (and demolished in 1960).

Oregon Digital: A search for "Peavy Hall" returns both images and textual documents, though it should be noted that not all of these results relate to the College of Forestry's Peavy Hall.

SCARC: A number of collections in SCARC's holding document the history of Peavy Hall, including the OSU Memorabilia Collection (Box-folder 29.10), and the College of Forestry Photograph Collection.