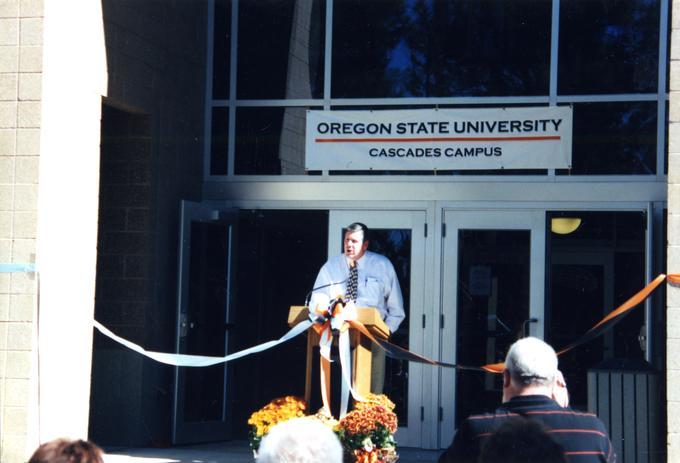 California on September 3, 1949. He grew up in Apple Valley, California, and moved with his family to Lake Oswego, Oregon, during his teen years. Westlund graduated from Whitman College and became an entrepreneur and businessman in central Oregon. He served in the Oregon Legislative Assembly from 1997 to 2008, when he was elected State Treasurer. Westlund's political career began in 1996 with his election as a Republican to the Oregon House of Representatives from the 53rd District in central Oregon. He held this position until 2003, when he was appointed to the Oregon Senate to complete Bev Clarno's term; he was elected to that seat, for the 27th Senate District, in 2004.

In early 2006, Westlund declared his candidacy for Oregon Governor as an independent; he subsequently withdrew from the Governor's race in August 2006. Westlund continued to serve in the Senate, as a Democrat, until he was elected as State Treasurer in 2008. His term as State Treasurer began in January 2009 and he served as Treasurer until his death in 2010. Westlund's political legacies include creation of the Oregon Cultural Trust, protection of the Metolius River, and healthcare reform. Westlund was an advocate for higher education in central Oregon and was instrumental in the establishment of the OSU Cascades Campus in Bend.

The Special Collections and Archives Research Center holds the Ben Westlund Papers, which document his political career in Oregon. The collection consists of documents, photographs, DVDs, plaques, and scrapbooks, among other memorabilia.

A search for "Ben Westlund" in Oregon Digital yields several results, most of them mentions of Westlund in OSU and UO periodicals and newspapers. 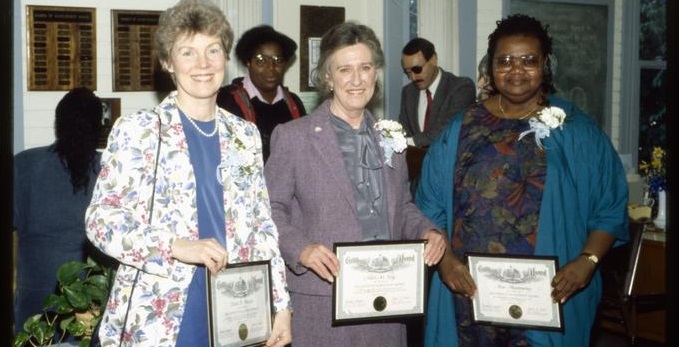 Helen Berg was born on July 15, 1932, in Columbus, Ohio, and graduated in 1949 from West High School in Madison, Wisconsin. She attended Wellesley College in Massachusetts until 1952, when she returned to Madison to attend, and graduate from, the University of Wisconsin with a Bachelor’s degree in Mathematics in 1953. After graduation, she focused on raising her two children until 1963, when she was hired as a statistical clerk for Oregon State University’s Agricultural Experiment Station.

Berg's work drove her to take statistics classes at Oregon State University, and over the course of ten years she earned a Master’s Degree in Statistics in 1973. She left her job as a statistics clerk in 1966, in favor of a job as a research assistant at Oregon State between the years of 1966 through 1973, while she was working towards her MS. After graduating with her Master’s degree, Berg moved to Illinois to work as a research assistant with the University of Illinois from 1973 until 1975. She later returned to Corvallis and served as the Director of the Oregon State Survey Research Center from 1986 until 1993.

Berg got involved with politics when she married the former sitting mayor of Corvallis, Alan Berg, in 1981. Alan Berg (1916-1989) was mayor of Corvallis for eight years, from 1979 to 1986. After her husband passed, Berg served on the Corvallis City Council from 1991 to 1994, and in 1994 ran for and was elected mayor of Corvallis. She served as mayor from 1995-2006, the longest serving mayor in Corvallis history and the first female. During her tenure, the Corvallis riverfront was redeveloped as a key component of Berg's Corvallis 2020 Vision. Berg also provided leadership in other successful projects including the construction of four new fire stations, and the completion of a sewer overflow remediation project, which stopped excess sewage from being dumped into the Willamette River.

Berg did not run for reelection in 2006, choosing instead to retire to Portland to be closer to her family. She passed away from mesothelioma on August 13, 2010, at the age of 78.

The Special Collections and Archives Research Center holds the Helen M. and Alan B. Berg Papers, which detail the couple's political and personal endeavors. Specific to Helen, her portion of the collection includes files and correspondence related to the development of the Corvallis riverfront, as well as materials related to her civic and mayoral service.

In addition, the Voices of OSU Women Oral History Collection includes an interview with Helen Berg.

A search for "Helen Berg" in Oregon Digital results primarily in OSU periodicals that mention Berg. 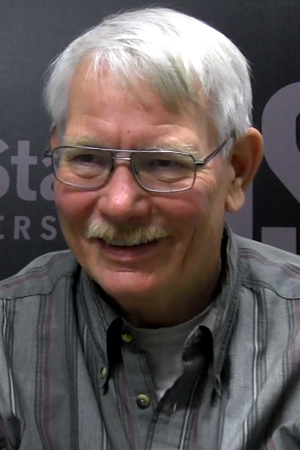 Michael Allen Beilstein was born in 1951 in Normal, Illinois. The son of a dairy farmer and one of ten children, Beilstein was raised in the Midwest until the age of thirteen, when his family moved to Salem, Oregon. A graduate of South Salem High School, Beilstein enrolled at Oregon State University in 1969 and ultimately majored in Biochemistry & Biophysics, graduating in 1973 as a member of OSU's first undergraduate cohort in the discipline.

Upon the completion of his studies, Beilstein volunteered in the Peace Corps and subsequently spent two years as a high school teacher in Lesotho, a landlocked country surrounded on all sides by South Africa. His experiences living in Lesotho during the era of apartheid helped to spur a period of interest in world affairs that later assumed a central role in his life. Following the end of his stint in the Peace Corps, Beilstein moved to the Washington, D.C. area, where he worked in a series of laboratory jobs and devoted much of his free time to the U.S. Labor Party, a radical left activist group.

In 1978, discouraged by his job prospects and exhausted by the demanding involvement insisted upon by the U.S. Labor Party, Beilstein returned to Corvallis, where he had accepted a position as a research assistant in the laboratory of Philip Whanger, an OSU professor of Agricultural Chemistry. Beilstein spent the next two decades as a member of Whanger's research group, supporting the laboratory's work on selenium deficiency and white muscle disease. This period of Beilstein's life was largely devoted to work and family, with his political interests fading into the background. Upon Whanger's retirement, Beilstein switched into research positions in the Animal Sciences department, the College of Pharmacy and, finally, the Crop and Soil Sciences department. He retired from OSU in 2007.

In 1991, Beilstein became motivated to involve himself once again in political affairs as a result of his disagreement with the United States government's decision to initiate military action against Iraq during the Persian Gulf War. His interests pretty quickly spread beyond anti-war activism to engagement with a variety of environmental and social justice causes. His leadership of a successful living wage campaign in Corvallis prompted Beilstein to run for an open seat on the Corvallis city council, which he initially filled from 1998-2000. Following an unsuccessful campaign for a position on the Benton County Board of Commissioners, Beilstein returned to the city council in 2006, where he remained until deciding not to seek reelection in 2016.

During his six terms as a city council member, Beilstein focused in particular on issues related to housing, law enforcement and climate action in Corvallis. He was also an active member of the Corvallis chapter of the NAACP and made an annual trip to Cuba to protest the United States' trade and travel ban.

In 2022, Beilstein decided to run for Oregon's 4th Congressional district for the seat vacated by the retirement of Peter DeFazio at the conclusion of his term. Running as a member of the Pacific Green Party/Progressive Party, he will be listed on the ballot for the November 8, 2022 general election.

An oral history interview with Beilstein was conducted as part of the Oregon State University Sesquicentennial Oral History Project.

His 2022 run for Oregon's 4th Congressional District is well documented on the Pacific Green Party of Oregon's website.

A search for "Mike Beilstein" on Oregon Digital yields several results, most of them mentions of Beilstein's political pursuits and campaigns in the Daily Barometer 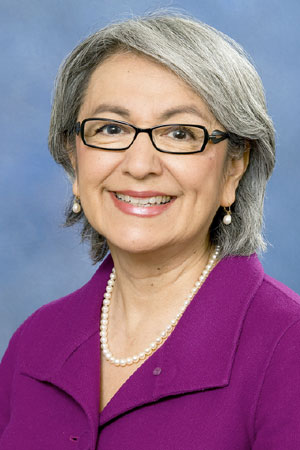 Susan Castillo was born in 1951 in East Los Angeles and grew up in southern California with her large extended family. Her grandparents were first generation immigrants to the United States from Mexico and her father was a deputy sheriff. Castillo's mother dropped out of school in the eighth grade and spent much of her life working in a factory, an example that Castillo later cited as primary in her own advocacy of education as a route to opportunity.

After completing high school, Castillo attended community college in southern California for a short period before dropping out. Later, in the mid-1970s, Castillo moved to Oregon and found secretarial work in support of OSU's Affirmative Action Director, Pearl Spears Gray. Gray became a mentor figure for Castillo and encouraged her to return to school. Castillo eventually enrolled full-time at Oregon State, becoming involved with the broadcast communications program and the student-run radio and television stations on campus. She graduated in 1981 with a BA in communications.

Her undergraduate work concluded, Castillo was hired by KVAL-TV in Eugene, Oregon as an on-air news reporter. She developed into an award winning journalist, and eventually covered the state legislature for the station. This acquaintance with politics led to her running for a position as a State Senator, in the mid-1990s. A Democrat, Castillo was sworn into the Senate in 1997, filling a vacant seat for Lane County. She remained in the Senate until 2002.

Susan Castillo is the first Hispanic woman elected to Oregon's state legislature. During her time in Salem, education, the environment and womens rights were among her main focuses. In 1997, her first year as a legislator, Castillo sponsored a successful bill that required Oregon insurers to provide equal prescription coverage for women's contraceptives. She later sponsored bills focusing on immigrant and farmworker rights, the tracking of pesticides, and voter registration. From 1999 to 2001 she was the assistant leader of the Senate Democrats. She also served on several committees including the Governor's Advisory Committee on DUII, the Oregon Commission on Hispanic Affairs, the Advisory Committee on Agricultural Labor, Health and Human Services Committees, and the Transportation Committee.

In 2003, following her departure from the Senate, Castillo was elected Superintendent of Public Instruction in the Oregon Department of Education, a position that she held until 2012. In assuming this post, Castillo once again broke new ground as the first Hispanic woman to be elected to a statewide office in Oregon. As superintendent, Castillo advocated for students of color and low-income families. She also supported Head Start funding, all-day Kindergarten, and ESOL programs; was involved in creating the state's Common Core Standards; worked to create more rigorous high school diploma requirements; and supported the Oregon virtual school district, an online distance education program. In 2004, Castillo was named one of the "100 Most Influential Hispanics" by Hispanic Business magazine.

In 2012, having resigned from her position as Superintendent of Public Instruction, Castillo became the western regional vice president for Project Lead the Way, a non-profit organization which works to create hands-on curricula in science, technology, engineering, and math. She lives in Eugene, Oregon with her husband, Paul Machu.

The Oregon Historical Society has created an entry in the Oregon Encyclopedia for Castillo that details her early life, educational history, and her experiences as a legislator and as the Superintendent of Public Instruction.

In addition, the Daily Barometer makes several mentions of Castillo, as does the Oregon Stater and OSU This Week.