Ballot Measure 15 was placed on the 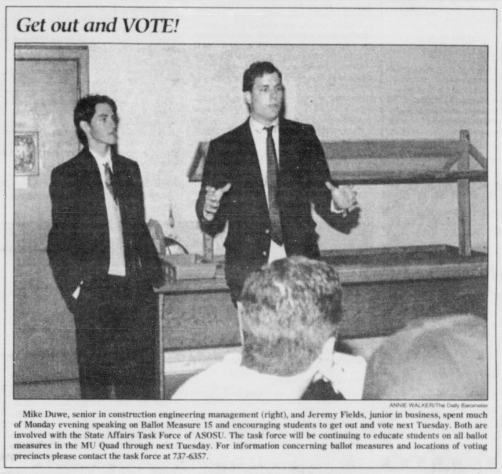 November 8, 1994 ballot and, "would have required a minimum state funding of schools and community colleges based on funds available from listed sources in the 1993-1995 biennium." The ballot measure was drafted to attempt to rectify a funding shortage created by Oregon Ballot Measure 5, which was passed in 1990, that, according to the Oregon Department of Revenue, "froze non-school taxes at $10 per $1,000 of assessed value. The school taxes limit began $15 per $1,000 of assessed value in the 1991-92 fiscal year, declining $2.50 per year to the final limit of $5 per $1,000 of assessed value in the 1995-06 fiscal year. 1990 Measure 5 required that, through 1996, the Legislature replace from the General Fund any revenue lost to schools because of the limits on property taxes"

Question: Shall constitution set minimum state funding of schools, community colleges based on funds available from listed sources in 1993-95 biennium?

A student organization formed with the goal of defeating Ballot Measure 15 was registered around 1993, which is documented in the Student Club and Organization Records.

An explanation of the measure from the City Club of Portland is held with Portland State University. A scan of the voters' pamphlet for Marion County that includes an explanation and comments from proponents and opponents has been archived by the Oregon Secretary of State. The Oregon Department of Revenue has also published a brief history of Measure 15 and other Oregon property taxation policy, titled "A Brief History of Oregon Property Taxation."

A search for "Measure 15" on Oregon Digital yields several results, primarily mentions of the measure in the Daily Barometer.