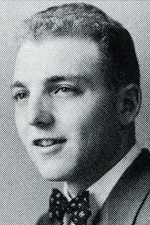 attended Oregon State College and earned a B.S. in forest products in 1952, and an M.S. in wood science in 1958. Later, he attended Michigan State University and earned a Ph.D. in forest products. Following this, Van Vliet taught in OSU's School of Forestry, also serving as a forest products extension specialist. In 1971, he served as the associate director of the Career Planning and Placement Center, and became the director in 1978, serving in this capacity until his retirement in 1990.

He did not seek reelection in 1991, when he retired both from public office and from his positions at OSU, but remained active in the community - he served on the board of Oregon Public Broadcasting as chairman, on the Oregon Board of Higher Education, the Environmental Quality Commission, and the Corvallis Riverfront Commission.

The Special Collections and Archives Research Center holds the Tony Van Vliet Papers, which document his ten terms of legislative service and his affiliation with OSU as a forestry researchers, instructor, and administrator. An oral history interview was conducted with Van Vliet as part of the Oregon State University Sesquicentennial Oral History Project.

Included in the Interview with Thomas H. Mercer is a discussion amongst Oregon legislators - Van Vliet among them - on topics relating to taxation, SB100, energy conservation, and correctional institutions.

Photographs of Van Vliet conducting a presentation are included in the Mortar Board Scrapbooks collection.

Finally, the College of Forestry Records include the research papers of Van Vliet.

Born in North Dakota and raised in Salem, Darlene Hooley 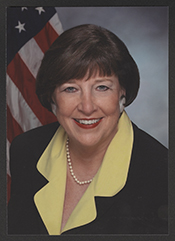 attended and later graduated from Oregon State University with a B.S. in Education. She became a schoolteacher, teaching physical education, music, and reading, while also pursuing post-graduate work at OSU and Portland State University. When her son was injured on a playground in West Linn, Hooley entered politics for the first time, motivated by the city's lack of response to safety issues.

She became the first woman to serve on the West Linn City Council. In 1980, she was elected to the Oregon State House of Representatives and served until 1987, focusing on policy issues surrounding education and welfare. She then became the first woman to serve on the Clackamas County Board of Commissioners, where she served until she was elected to the U.S. House of Representatives in 1996, where she served until 2008. While in office, she served as a member of the House Financial Services Committee, where she sponsored and co-sponsored several consumer financial legislation, including the Fair and Accurate Credit Transaction Act and the Goodlatte-Leach Internet Gambling Prohibition Act. She also notably voted against the authorization of use of military force in Iraq in 2002.

The Oregon State University Memorabilia Collection includes a subject file about Darlene Hooley, and the Oregon State University Sesquicentennial Oral History Collection includes an interview with Hooley, where she details her experience as an undergraduate at OSU and as a public servant in Oregon and Washington D.C. The University Advancement Videotapes also include a videotape of a lecture given by Hooley titled, "Your Executive Branch and You."

In addition, the Willamette University Archives and Special Collections hold the Darlene Hooley Papers, which detail her political career at length, and include campaign records, State of Oregon records, and U.S. Representative Records.

Clifford Wayne Trow was born in 1929 in Topeka, 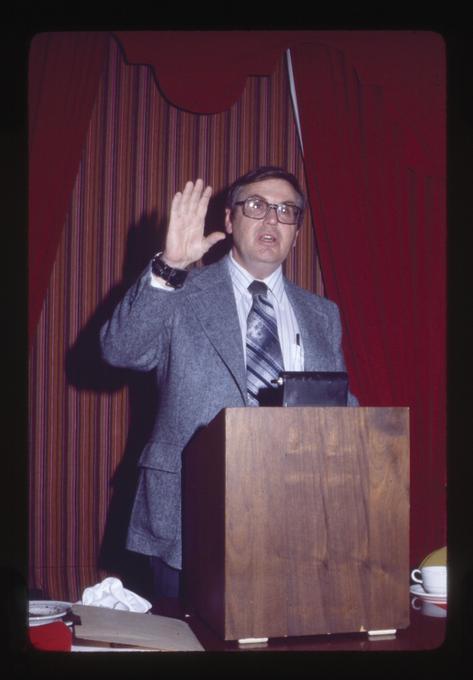 Trow moved directly from Colorado to Oregon, where he assumed a position on the history faculty at Oregon State University. As an academic, Trow's research interests included the presidency of Woodrow Wilson as well as American foreign policy in Mexico and elsewhere. In 1972 Trow received the Binkley-Stephenson Award from the Organization of American Historians for his paper, "Woodrow Wilson and the Mexican Interventionist Movement of 1919," published in The Journal of American History. He remained on staff for more than thirty years, retiring from OSU in 1996.

Active in Democratic Party politics from his days in Colorado, Trow ran for the Oregon Senate in 1970, losing the District 18 race to incumbent Dick Hoit. Four years later he ran again, this time winning and beginning a period of service in the Senate that would last until his retirement in 2003. A steadfast supporter of education, Trow served on the Senate Education Committee for eight sessions, including five as Chair. In 1979, he was recognized as "Education Senator of the Year" by the Oregon Education Association and was similarly honored as "Senator of the Year" by the Oregon Library Association in both 1991 and 1993.

A member of numerous additional committees, Trow chaired Senate Ways and Means in 1993 and subcommittees of Ways and Means from 1985-1991. Elected President Pro Tempore of the Senate in 1981, Trow also served as Senate Democratic Leader from 1995 to 1998. In 2002, on the eve of his retirement from elected office, Trow was honored by the city of Corvallis, which declared December 16th to be "Cliff Trow Day."

Not long after his arrival in Corvallis in 1965, Trow met Jo Anne Johnson and, in 1969, the couple married. Jo Anne enjoyed a long career as a high-level administrator at OSU including stints as Dean of Women and Vice President for Student Affairs - the first female vice president in OSU history. Together the Trows have remained active in retirement, devoting their energies to numerous civic groups including the OSU Academy for Lifelong Learning, which Cliff Trow co-founded, as well as the Benton County Historical Association, the Corvallis Parks and Recreation Advisory Board and the Old Mill Center for Children and Families.

The Oregon State University Memorabilia Collection includes a subject file dedicated to Cliff Trow (there is also one dedicated to JoAnne Trow, his wife and notable public figure).

In addition, the Dale Moss Papers include photographs of Cliff Trow during his tenure at OSU.

Alan B. Berg earned an undergraduate degree in forestry management from Oregon State College in 1941. After service in the military in World War II, he completed a Master of Forestry degree at the University of Washington in 1955. He returned to Oregon State in 1957 to teach forest ecology and retired as a Professor of Forest Science in 1981. He was also active in a number of organizations, including the League of Oregon Cities and the Nature Conservancy. He served on the Corvallis City Council from 1973 to 1978 and then two terms as mayor from 1979 to 1986. The Alan B. Berg Natural Area in Corvallis is named in his honor.

The Special Collections and Archives Research Center holds the Helen M. and Alan B. Berg Papers, which includes a transcript of a 1981 oral history transcript, his undergraduate and graduate theses, article reprints, and reports and proceedings, as well as files from his time on the Corvallis City Council and as Mayor.

In addition, a search for "Alan B. Berg" in Oregon Digital yields several results, the majority of them mentions of Berg in OSU periodicals and publications.

Born in 1934, LeRoy Owens was an educator from the Eugene 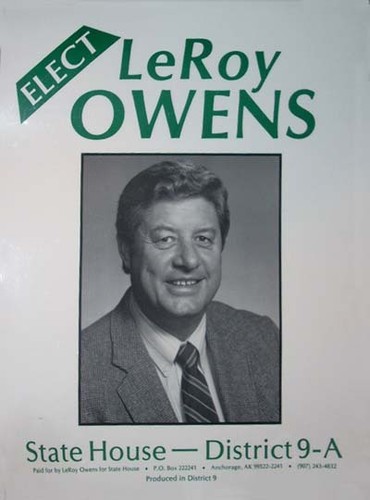 area that ran for and was elected to the Oregon House of Representatives, serving Lane County, Second Position. Originally from Nebraska, his family moved to Boise, Idaho during the Dust Bowl. Owens received a bachelor's and master's degree in education from the University of Idaho and went on to become a middle school vice principal, coach, and teacher at South Junior High School in Boise. He and his family moved to the Eugene area in 1963, where he took a job as a vice-principal at Wilson Junior High.

In 1970 election, Owens faced off against Bill Bowerman -- then-head coach of the University of Oregon Track Team. On the campaign trail, Owens became known for his green school bus -- called the Voter Information Bus -- that drove around his district distributing information about voter registration, the upcoming election, and Owens himself.

Owens narrowly won the election, with a mere 815 vote margin in his favor of an approximately 61,000 cast.

While in office, Owens tried, unsuccessfully, to pass a bill that would allow individuals to change the gender marker on their state-issued ID, after being contacted by a group of bereaved citizens from his district who were not allowed to make this change. Later, Owens once again tried and failed to pass a law that would outlaw hitchhiking in state highways and would create a ride-sharing program to disincentivize hitchhiking.

He was not reelected in 1972. He attempted to run for State Superintendent of Public Instruction later in his career and failed.

SCARC holds Memoirs of a Citizen-Politician in its History of the Pacific Northwest Rare Book Collection, which is a semi-autobiographical account of Owens time in as an Oregon legislator.

In addition, the University of Oregon Archives of Northwest Folklore holds the Folklore of Political Campaigns and Legislature, which makes mention of LeRoy Owens and his proposed legislation.