Measure 6 was introduced in 1986 and, if passed, would have prohibited 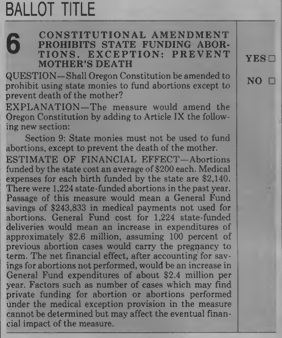 the use of state funds for abortions, except to prevent the death of the mother. The language of the Measure read,

Question - Shall Oregon Constitution be amended to prohibit using state monies to fund abortions except to prevent death of mother?

Explanation - The measure would amend the Oregon Constitution by adding to Article IX the following new section.

Section 9: State monies must not be used to fund abortions, except to prevent the death of the mother"

The Special Collections and Archives Research Center holds few collections that make mention of Measure 6 within their contents. The Lavender Network Newsmagazine makes mention of efforts to defeat Measure 6.

In addition, the Oregon Secretary of State holds the 1986 Marion County Voter's Guide, which includes the Measure 6 text in full, an estimate of financial effect, an explanation of the measure, and arguments both in favor of and against the measure.