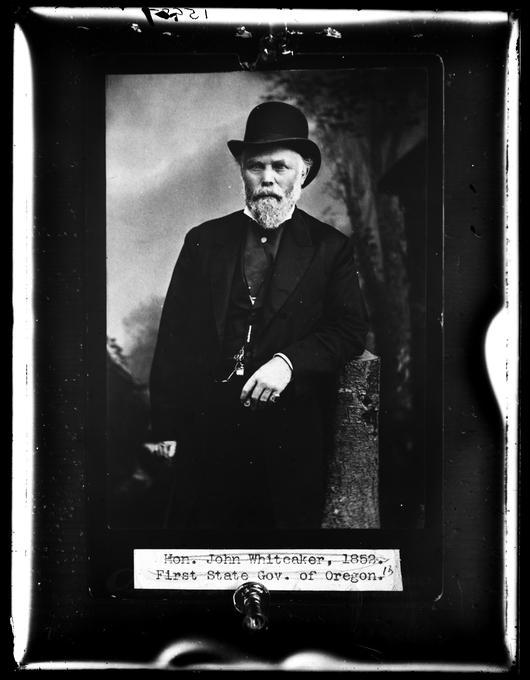 in 1857. Born in Indiana, Whiteaker was drawn to the west coast by a "gold fever" that brought him to California. Whiteaker then, having earned enough to relocate once more, moved his family to the Oregon territory on the Oregon Trail. Working primarily as a farmer in Lane County, he became involved in the Democratic party soon after his move. He was first elected as a judge for the Lane County Probate Court in 1856, and was then elected to the territorial legislature in 1857. He was elected Governor of Oregon in 1858, following the ratification of the state constitution -- he did not take officially take office until Congress approved Oregon's statehood in 1859. During his term in office, he was responsible for sorting through the large amount of land disputes for ownership of public land. He was the subject of suspicion and disapproval for his pro-slavery views, especially as the U.S. descended in the Civil War. He was not nominated to run for a second term for Governor in 1862. In 1866, he ran for the Oregon House of representatives and won, serving three terms from 1866 to 1870. He was then elected to the Oregon Senate in 1876, where he served as the president of the Senate in 1876 and 1878. He was elected to serve in the U.S. House in 1878 as Oregon's at-large representative. He was not reelected in 1880. In 1885, he was appointed at Oregon's Collector of Revenues. In 1890, he relocated from Portland back to Eugene, where he remained until his death in 1902.

Not much information on John Whiteaker exists within the OSU Special Collections and Archives Research Center, save for a couple of photographs found within the Gerald W. Williams Regional Albums and the J.B. Horner Photograph Collection.

John Whiteaker's papers, as well as a commutation of sentence signed by then-Governor Whiteaker, are housed at the University of Oregon Special Collections and University Archives.

In addition, the Oregon Historical Society holds a number of materials related to Governor Whiteaker: 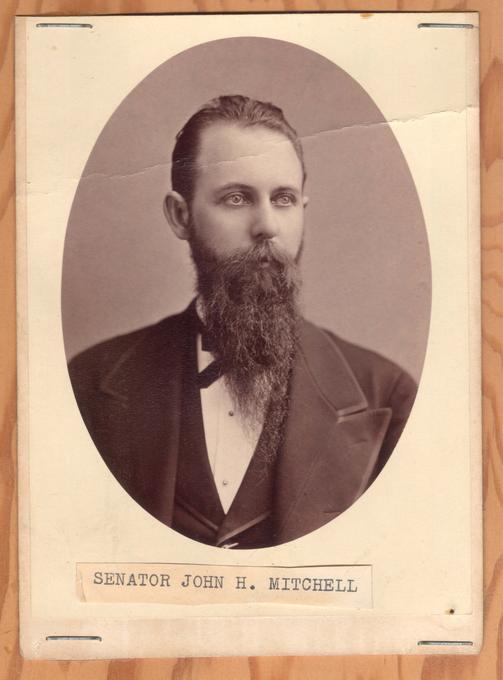 perhaps best known for his involvement in the Pennoyer v. Neff Supreme Court case. A Republican, he served as Oregon's Senator three times between 1873 and 1905. He was born in Pennsylvania and worked as a teacher before beginning his own law practice. He left Pennsylvania in the 1860s to move to California, and shortly after moved to Portland. He became a successful lawyer and politician in Oregon, becoming involved in lower court battles that eventually led to the landmark Pennoyer v. Neff case. Marcus Neff, a speculator, had attempted to gain claim to land under the Donation Law of Oregon and ran into issues filing the proper paperwork. Neff hired Mitchell to speed the process along, as Neff was illiterate, and Mitchell eventually won him the parcel of land he had been granted. However, according to Mitchell, Neff did not pay his legal fees, and he sued for the balance. Mitchell claims, unscrupulously, that Neff resided in California, and due to Mitchell's ineffective service, Neff did not appear in court. Mitchell moved for default judgement, considering Neff's failure to appear, and Neff's parcel of land was put up for auction. Mitchell purchased the land, and transferred ownership to Sylvester Pennoyer.

Mitchell was elected to the Oregon State Senate two years after his arrival to the state, in 1862. In 1864, he became the President of the Senate until 1866. Mitchell was then selected by the Oregon State Legislature to serve in the U.S. Senate in 1872, 1885, and 1901. Late in his political career, Mitchell, alongside most of the rest of Oregon's congressional delegation, received indictments for their involvement in the Oregon Land Fraud Scandal, where parcels of cheap land alongside a railroad running from Portland to the California-Oregon border were illegally obtained and sold to timber companies at an increased cost. Mitchell was convicted and his expulsion from office was pending when he died in 1905.

In addition, the University of Oregon and the Oregon Historical Society hold a number of materials related to the life and career of John H. Mitchell: 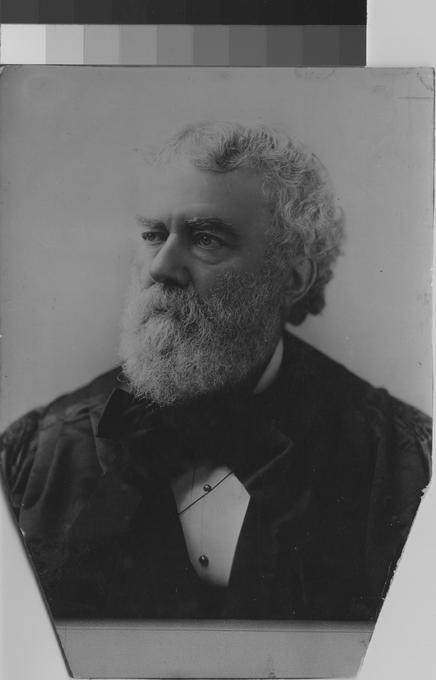 Oregon. He was born in Maryland and lived there until he moved to Ohio, where he finished his education and began work as a teacher. He read law and passed the Ohio bar in 1847, and began practicing law in the state until he began his journey on the Oregon Trail in 1849. He settled in Lafayette, Oregon, and began teaching again. He was consulted on the establishment of a legal system in Yamhill County, and eventually began practicing law in Oregon in 1850.

Later that year, Deady was elected to the Oregon Territorial Legislature, where he served in the House of Representatives. He was asked to help in publishing the laws passed prior to the establishment of the territorial legislature in 1849, and the first volume of Oregon laws published was titled, "Deady's General Laws of Oregon." In 1851, Deady was elected to the upper Council, and served as its President in 1853. Deady was appointed as an associate justice of the Territorial Supreme Court later in 1853, and was again appointed in 1857. Deady served as a delegate to the Oregon Constitutional Convention in 1857, and was elected president of the convention. Following Oregon's statehood admission, Deady was confirmed to the United States District Court for the District of Oregon in 1859. In 1867, Deady was assigned to serve as a judge for the U.S. Circuit Court in San Francisco. During this period, Deady also served on the Board of Regents for the University of Oregon and later helped in establish the law school at the university.

SCARC holds Pharisee Among Philistines: The Diary of Judge Matthew P Deady, 1871-1892 as a rare book in the History of the Pacific Northwest collection. In addition, SCARC also holds The Organic and Other General Laws of Oregon, together with the National Constitution and Other Public Acts and Statutes of the United States, 1845-1864

The Oregon Historical Society Research Library holds the Matthew Paul Deady Papers, which largely consists of a number of letters written to and received from Deady's political correspondents and friends. His journal is also included in this collection, as are his tax records, receipts, speech transcripts, and letters to and from his wife, Lucy. 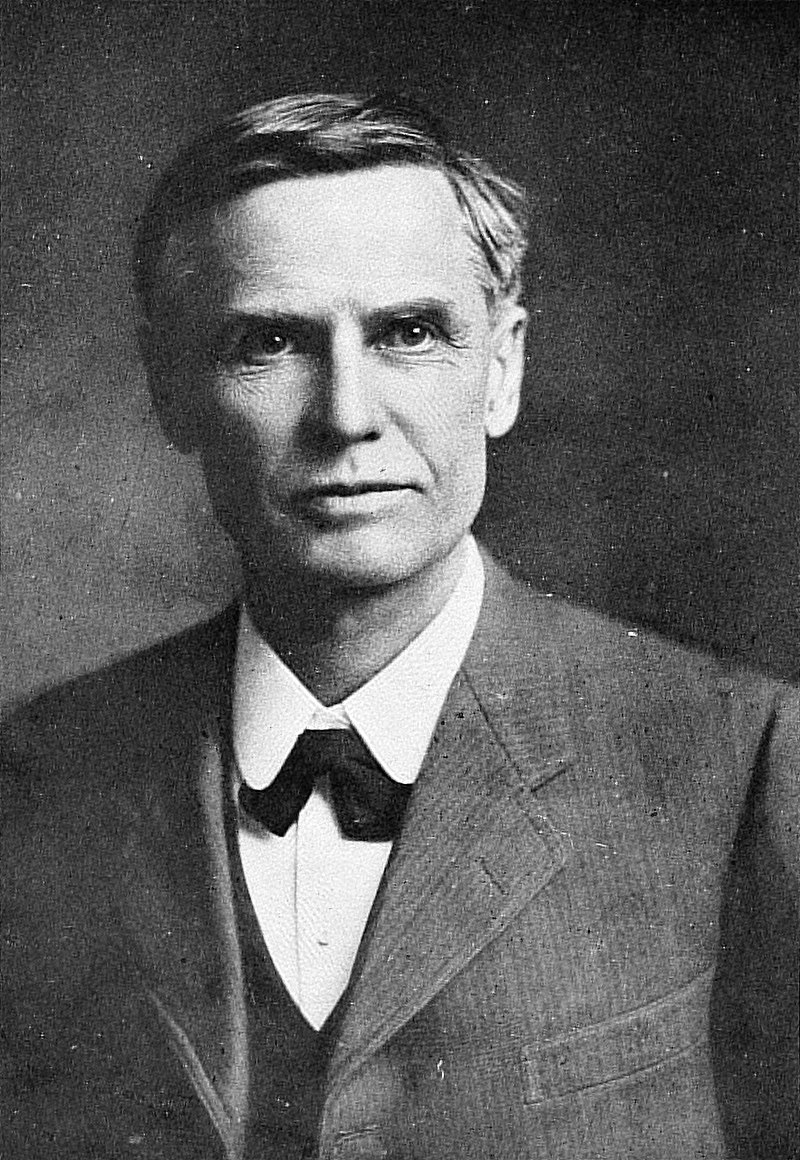 Wisconsin and moved in Colorado at age 17 to work as a miner. He attended law school in Colorado and was admitted to the Colorado bar in 1880. He practiced law around Colorado for several years, and served as a newspaper editor in Tincup, Colorado until he was diagnosed with tuberculosis, which forced his move to Honolulu, Hawai'i. U'Ren moved back to Oregon in 1889, relocating to Milwaukie, Oregon and establishing a law practice, where he became involved in politics. An avid supporter of direct democracy, U'Ren worked to implement initiative, referendum, and recall as methods of direct democracy in government. He was elected chairman of the Populist Party in 1894.

In 1896, U'Ren was elected to the Oregon House of Representatives, but the House failed to convene in 1897 and only held a short special session in 1898. He tried and failed in passing initiative and referendum procedures during this session. He then organized the Oregon Direct Legislation League to expand support for direct democracy measures, and was successful in passing an initiative and referendum amendment to the Oregon Constitution in 1898. The amendment was ratified in 1902. Later in his career, he was also involved in a number of other initiative measures: establishing the popular vote for U.S. Senators, creating presidential primaries, and amending the Oregon Constitution to allow proportional representation, essentially allowing ranked choice voting on Oregon ballots. Following his failed run for Governor in 1914, U'Ren withdrew from politics.

SCARC holds a dissertation on William Simon U'Ren written by Scott W. Reed titled "W.S. U'Ren and the Oregon System." It details the emergence of the series of direct democracy measures U'Ren advocated for -- initiative, referendum, and referral -- that became known as "The Oregon System" across the country. SCARC also holds several rare books related to the Oregon System and U'Ren's influence: 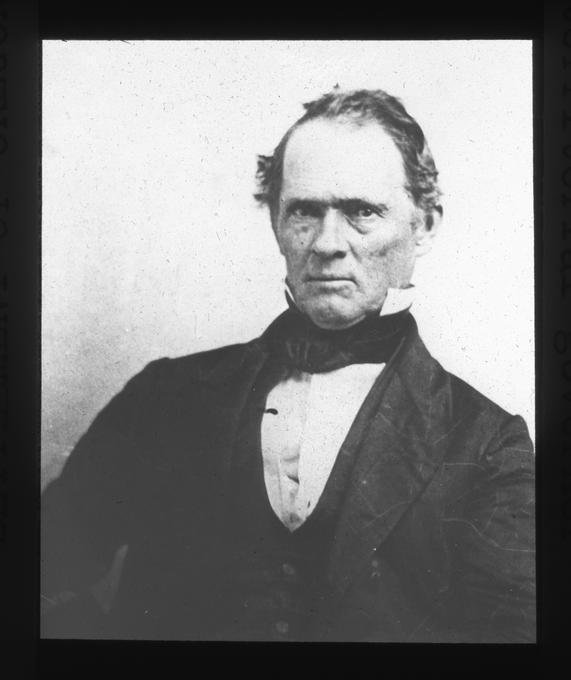 child, and later left home, married, and moved to Indiana. He was elected to the Indiana House of Representatives in 1822 at age 21 and served in the House for three separate terms until 1839. He then moved to the Indiana State Senate in 1839 and remained until 1846. He resigned his position in the Senate to serve in the Mexican-American War and was later elected colonel of his company.

Following the war, Lane was appointed governor of the Oregon territory -- he assumed the position in 1849. He resigned from this position in 1850, and was appointed as Oregon's delegate to Congress in 1851, where he was reelected to the position twice in 1855 and 1857. Once Oregon was granted statehood in 1859, Lane served as one of Oregon's first two Senators, alongside Delazon Smith. His political career effectively ended when he was nominated to the Southern Democrat ticket as the vice president to candidate John Breckinridge. Lane was staunchly pro-slavery, and supported the secession of the South from the Union. His defeat in the race for vice president effectively marked the end of his political career in Oregon. He remained sympathetic to the South and owned slaves as late as 1878, some speculate. Lane County is named after him, as are a number of schools in the state.

SCARC holds The first printed message of the first governor of Oregon, a facsimile of the only known copy, found in the territorial archives of the State department, as an enclosure in a letter from Governor Joseph Lane, here reproduced to illustrate an address at the meeting of the Society of American Archivists, October 24, 1938 in the History of the Pacific Northwest rare books collection.

In addition, the University of Oregon holds the Joseph Lane Papers, which detail his political career and includes a biography of his life produced by Nina Lane Faubion. The Oregon Historical Society Research Library also holds the Joseph Lane Papers, which includes correspondence, reports and requisitions made during the Mexican-American War, and materials from his position as Oregon Superintendent of Indian Affairs