Introduced in 2004, Measure 36 was qualified by initiated constitutional amendment for the 2004 General Election ballot that outlawed same-sex marriage in the state of Oregon. The proposed measure read, in full: 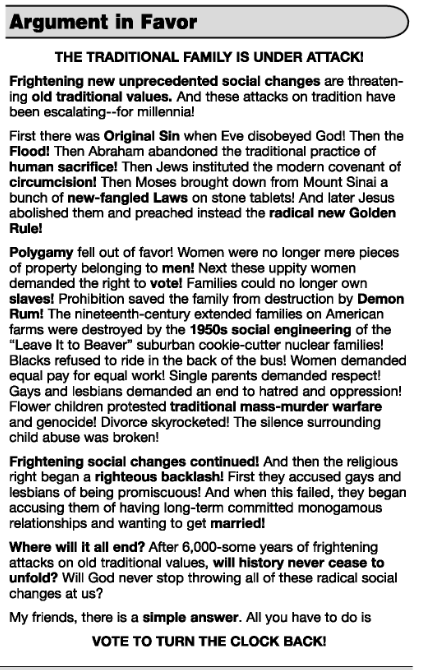 Amends Constitution: Only Marriage Between One Man and One Woman is Valid or Legally Recognized as Marriage.

Result of 'yes' vote: 'Yes' vote adds to Oregon constitution declaration of policy that only marriage between one man and one woman is valid or legally recognized as marriage.

Result of 'no' vote: 'No' vote retains existing constitution without a provision declaring that only marriage between one man and one woman is valid or legally recognized as marriage.

Summary: Amends constitution. Oregon statutes currently provide that marriage is a civil contract entered into in person between individuals of the opposite sex, that is, between males and females at least 17 years of age who solemnize the marriages by declaring 'they take each other to be husband and wife.' The existing Oregon Constitution contains no provision governing marriage. Currently, the State of Oregon recognizes out-of-state marriages that are valid in the state where performed, unless the marriage violates a strong public policy of Oregon. Measure adds to Oregon Constitution a declaration that the policy of the State of Oregon and its political subdivisions is that 'only a marriage between one man and one woman shall be valid or legally recognized as a marriage."

The text of the proposed amendment to the Oregon Constitution reads:

"The Constitution of the State of Oregon is amended as follows:

It is the policy or Oregon, and it's political subdivisions, that only a marriage between one man and one woman shall be valid or legally recognized as a marriage."

In 2014, aggrieved parties took the measure to court, arguing that Oregon's state marriage laws unconstitutionally discriminated against them, effectively excluding them from their fundamental right to marriage and the privileges afforded it. In May of 2014, the United States District Court for the District of Oregon determined that the measure was unconstitutional, after landmark LGBTQ+ rights decisions by the Supreme Court were handed down in 2013 (both United States v. Windsor and Hollingsworth v. Perry) and then-Attorney General Ellen Rosenblum refused to defend the measure in court, arguing that there was no constitutionally-sound argument to defend the measure in light of recent Supreme Court rulings on same-sex marriage. The following year, the U.S. Supreme Court handed down their decision in Obergefell v. Hodges, which overruled all voter-approved constitutional bans on same-sex marriage that remained in effect across the country.

The Special Collections and Archives Research Center holds the Thomas Kraemer Papers, which include a subject file related to Measure 36 and related news coverage and activism surrounding its passage.

In addition, the Oregon Historical Society holds several collections that include information about Measure 36:

Finally, a search for "Measure 36" in Oregon Digital yields thousands of results, many of them mentions of the measure in The Daily Barometer and the University of Oregon's student newspaper, Oregon Daily Emerald.