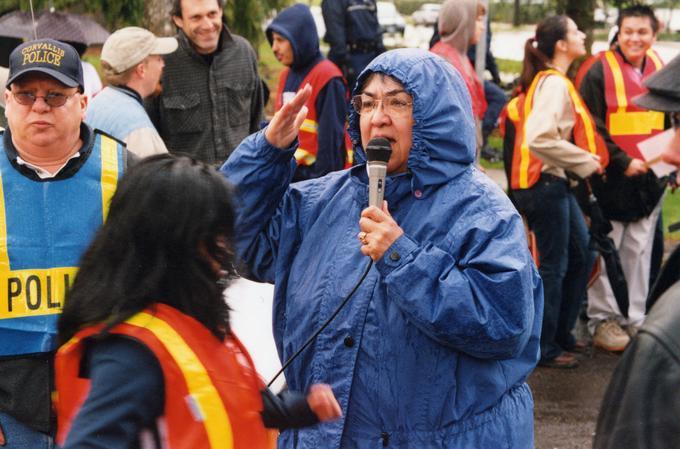 Annabelle Jaramillo earned her undergraduate and graduate degrees from Portland State University and worked as a research botanist for the USDA Pacific Northwest Forest and Range Experiment Station at the Forestry Sciences Laboratory in Corvallis, Oregon, from 1974 until 1987. Jaramillo served as President of National Image Inc., a national Hispanic civil rights organization, as well as the Executive Director of the Oregon Commission on Hispanic Affairs.

In 1991, she organized a campaign that was successful in defeating a charter amendment proposed by the Oregon Citizens Alliance that would have blocked anti-discrimination measures from being enacted in the city. From 1995 to 2000, she served as Oregon Governor John Kitzhaber's Citizen's Representative. Her office responded to citizen concerns and she was part of the Governor's senior staff. In 1997, Kitzhaber named Jaramillo to the National Environmental Justice Advisory Board (NEJAC), an EPA body that assists federal agencies in the development of environmental justice strategies. Jaramillo's service with NEJAC ended in 2001. Jaramillo was elected as a Benton County (Oregon) Commissioner in 2000, 2004, and 2008. During her tenure as Benton County Commissioner, she made headlines for making the decision to stop issuing all marriage licenses in the county in response to the Oregon Attorney General's 2004 order to stop issuing marriage licenses to same-sex couples. She has also served on the Oregon Progress Board, the Oregon Sustainability Board, and the Federal Forestlands Advisory Committee.

The Special Collections and Archives Research Center holds the Annabelle E. Jaramillo Papers, which detail her personal life and political service. The papers include materials from Jaramillo's undergraduate and graduate education at Portland State University and her subsequent service with U.S. Forest Service. The collection also documents her advocacy within the Hispanic community and as Benton County Commissioner. Approximately a third of the material of this collection documents her involvement with the National Environmental Justice Advisory Council.

A search for "Annabelle Jaramillo" in Oregon Digital yields a few results, most of them mentions of Jaramillo in university periodicals.

In addition, Jaramillo is mentioned in the Minority Education Office Records.

Loretta J. Smith was born in 1966 in Michigan and later enrolled at Oregon State University when she was 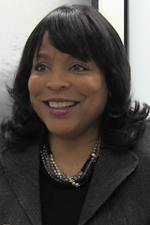 seventeen years old. While at OSU, Smith participated in the Black Student Union, worked at the student-run KBVR television and radio stations. Smith also participated in the production of A Raisin in the Sun - the first primarily African American play performed at OSU. Smith originally intended to study Political Science at OSU; however her work at KBVR shifted her academic focus to Broadcast Communications. Smith graduated from OSU in 1987 with a degree in Communications. She soon began working a front desk job for Ron Wyden, who at the time was representing Oregon District 3 in the U.S. House of Representatives. Initially viewed as short-term employment, Smith ended up working with Wyden for the next twenty-one years, moving on from the front desk to a position as community liaison and manager of Wyden's entire office staff.

In 2010 Smith successfully ran for Multnomah County Commissioner in Portland's District 2, the primary focus of her campaign being support for the elderly and youth. While on the Board of Commissioners, Smith has led a Summer Youth Connect program and organized anti-bullying summits at Grant High School. In 2013 Smith was named chair of Portland's Metro Policy Advisory Committee. She has also served as Treasurer of the Oregon Assembly for Black Affairs and has actively supported the Oregon Food Bank, Head Start, and the Boys & Girls Club. She was re-elected to a second term on the Multnomah County Board of Commissioners in 2014. She was unable to run for reelection to her position on the County Commission, and instead ran for and narrowly lost a bid for Portland City Council in 2018. She ran again in a City Council special election to replace Nick Fish, who had died in office, where she narrowly lost of Dan Ryan. In 2021, she announced her candidacy for Oregon’s 6th Congressional District.

The Oregon State University Sesquicentennial Oral History Collection includes an oral history interview with Loretta Smith, in which she details her personal life, her experience at OSU, as well as her time working for Congressman Ron Wyden, and her own public service on the Multnomah County Board of Commissioners.

In addition, a search for "Loretta Smith" in Oregon Digital yields several results, most of which are mentions of Smith in university periodicals. 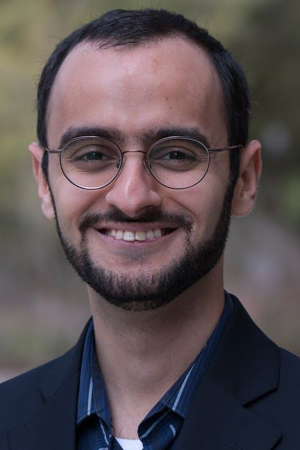 Sami Ahmad Al-AbdRabbuh was born in 1987 in Tucson, Arizona, where his father was studying for a degree in Computer Engineering at the University of Arizona. Around the age of six, Al-AbdRabbuh and his family moved to Saudi Arabia, his father's home country, and it was in Saudi Arabia that Al-AbdRabbuh completed his primary, secondary and undergraduate educations. Interested in science from an early age, Al-AbdRabbuh attended the King Fahd University of Petroleum and Minerals (KFUPM), completing a bachelor's degree in Control and Instrumentation Systems Engineering in 2010. While an undergraduate, Al-AbdRabbuh developed an automated system for tracking the score in table tennis games that was based on the detection of audio signatures made by ping pong balls as they struck the table.

Following the completion of his studies at KFUPM, Al-AbdRabbuh and a colleague launched their own start-up business, Crispy Science, which creates science-based learning programs for young people. At around this same time, Al-AbdRabbuh accepted a position at Bently Nevada, a subsidiary of General Electric with headquarters in Bahrain, where he worked as a design engineer.

In 2012, Al-AbdRabbuh received funding from the Saudi government to pursue a graduate degree in the United States. Interested in engineering management, Al-AbdRabbuh ultimately enrolled as a master's student in Oregon State University's Industrial Design program and researched comprehensive emergency management. During this time, Al-AbdRabbuh also became involved in student government, serving stints as both a Senator and Representative within the ASOSU legislative branch, as well as a term on the Memorial Union Advisory Board. Al-AbdRabbuh was likewise a driver for OSU's solar car team, participating in two races in the United States and a third in the United Arab Emirates.

In 2015, Al-AbdRabbuh completed his OSU master's degree and subsequently enrolled in the university's doctorate program in Industrial Engineering. His interests in public service continued to broaden as well, including work in the OSU Center for Leadership Development as well as membership on the Corvallis School District Budget Committee. During the 2016 election cycle, Al-AbdRabbuh ran for the state house as the Progressive Party's candidate representing District 16. The election was claimed by Democratic incumbent, Dan Rayfield. Al-AbdRabbuh was subsequently elected to the Corvallis School Board, assuming the position of vice-chair in June 2017.

He was reelected to the Corvallis School Board in 2021, where he will serve until 2025. He was recently confirmed to served at the Fair Dismissal's Appeals Board. In 2022, he entered the Democratic primary for Oregon's 4th Congressional District, eventually losing to Val Hoyle.

SCARC conducted an oral history interview with Dr. Sami Al-AbdRabbuh, where he details his upbringing in Arizona and, later, Saudi Arabia. He discusses his educational history, comparing the education systems in the U.S. and Saudi Arabia, and later narrates his experience moving to Oregon to pursue graduate education at OSU. He also discusses his continuing involvement in public service and run for the state legislature.

His current campaign website provides additional information about his political accomplishments and motivations for running for Oregon's 4th Congressional District.

A search for "Sami Al-AbdRabbuh" on Oregon Digital yields several results, most of them mentions of Dr. Al-AbdRabbuh in university periodicals.