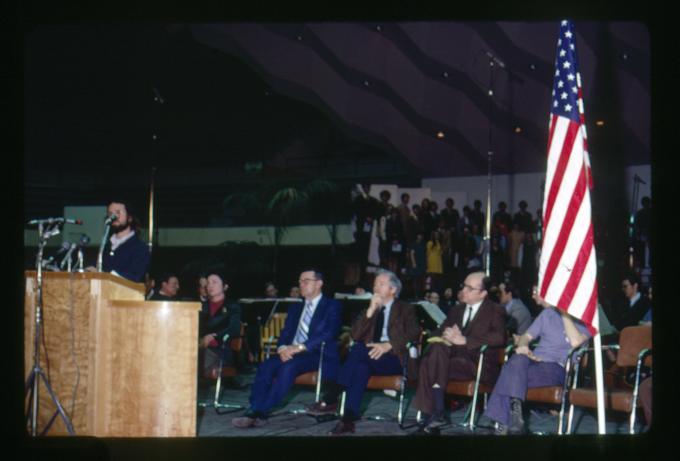 The origins of student government at OSU are rooted in an 1897 campaign to fund the football team through the establishment of incidental fees. Although the College Board of Regents rejected this initial move toward the systematic funding of student activities, a student conference three years later set forth a proposed constitution and a set of bylaws for the establishment of a student governmental body that would have the power to institute and regulate student body fees. This proposal was approved by a vote of the student body and faculty in 1900 and resulted in the formation of the college’s first student government, at that time called the Student Assembly.

In 1948, the structure of the Associated Students of Oregon State (as it was known by this time) underwent a fundamental change with the introduction of a senate body vested with the power to introduce legislation, approve the ASOSC budget, make changes to the constitution and statutes, and recall any elected or appointed member of student government.

In 1966, a judicial branch consisting of the Student Traffic Court and the ASOSU Justice Commission was added to student government. To assist student government in working with student organizations, long-term strategizing, legal research, and other special projects with a perspective outside the senate and executive branch, ASOSU created the position of Student Advocate in 1986.

In 1994, ASOSU adopted a bicameral senate structure that gave graduate students voting status in a senate body of their own equal to their undergraduate counterparts.

The Special Collections and Archives Research Center holds several collections having to do with ASOSU:

A search for "ASOSU" or "Associated Students of Oregon State University" in Oregon Digital yields hundreds of results, ranging from photos of ASOSU representatives and activities to mentions of the student government in university periodicals.