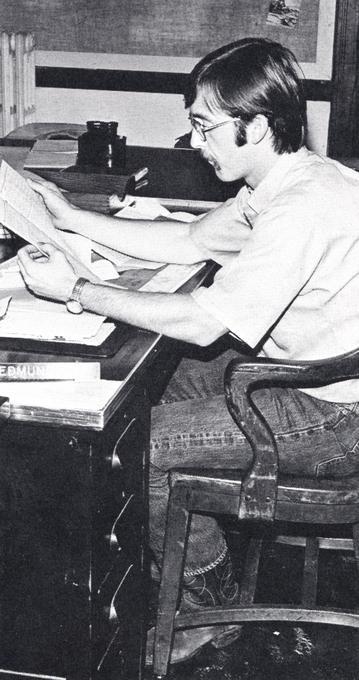 and graduated with a liberal studies degree, combining his interests in technical journalism and the sciences. He wrote for The Daily Barometer beginning in the spring term of his freshman year at OSU as a general assignment reporter, an intramural sports writer, and photographer. He became the campus editor of The Daily Barometer in 1971, where he directed the Barometer's coverage of the Nancy Wyckoff murder on campus, as well as anti-war protests occurring in the community. Beyond The Barometer, Edmunson also wrote for the Corvallis Gazette-Times, the Albany Democrat-Herald, The Oregonian, and was an AP correspondent.

Following his graduation in 1973, Edmunson and his wife moved to Pendleton, where he worked as a sports writer for the East Oregonian. He was admitted to the law school at the University of Oregon, but denied admission to move to Astoria to work as a government and investigative reporter for the Daily Astorian - work that he won an Oregon Newspaper Publishers Association award for. He attended law school in 1980, where he was involved in student government and with the Daily Emerald newspaper. He graduated in 1983 and began practicing law in Eugene.

In 1987, the Lane County Board of Commissioners appointed Edmunson to fill a vacant seat in the state House of Representatives. After finishing this term, he was elected to three successive terms, ending in 1995. He continued to engage in politics after his service in the House - in 1999, he was named chair of the Democratic Party of Oregon, serving until 2007. He also served as a presidential elector in 2000 and 2004. Today, he continues to practice law in Eugene.

A search for "Jim Edmunson" in Oregon Digital yields several results, most of them articles written and photographs taken by Edmunson during his time associated with The Daily Barometer. 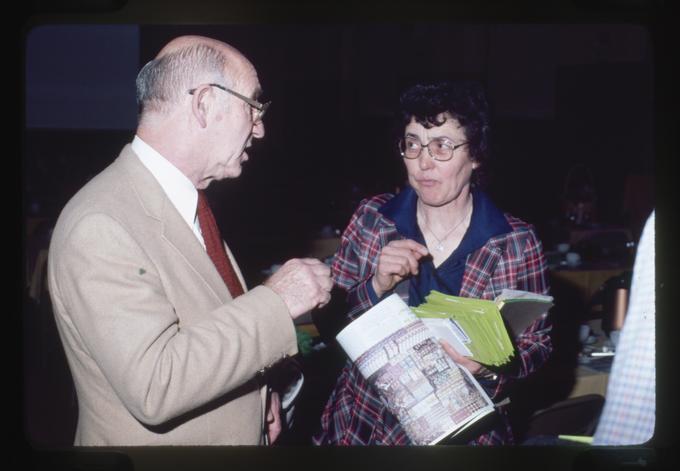 Born in Lakeview, Oregon in 1925, Elizabeth Nelson VanLeeuwen graduated from Oregon State College in 1947 with a B.S. in Home Economics. Later that year, she married George VanLeeuwen, and worked both as a farmer and as an educator at Monroe High School. She also had a weekly radio program on KWIL.

She went on to serve in the Oregon Legislature as State Representative for District 37 (Linn County) from 1981 to 1999. In her role as representative, VanLeeuwen campaigned actively against the listing of the spotted owl as an endangered species. In addition to her work in the legislature, VanLeeuwen has also been involved in a number of other advisory and governmental bodies, including the Western States Legislature Forestry Task Force and the South Santiam Watershed Management Area Committee. She was elected to the Linn Soil and Water Conservation District in 1999. She ran for election to Oregon's 4th congressional district against Peter DeFazio in 2002 and lost. She currently resides in Halsey, Oregon.

The Special Collections and Archives Research Center holds the Liz VanLeeuwen Spotted Owl Collection, which details the representative's efforts to prevent the spotted owl from being added to the endangered species list and, later, to delist the spotted owl (more about this specific policy and ensuring controversy can be found in the Spotted Owl Management, Policy, and Research Collection). The collection focuses largely on the perspective of the timber industry during the controversy, but also includes discussions of the listing of the Marbled Murrelet.

In addition, the Robert W. Henderson Photographic Slides Collection includes photographs of VanLeeuwen in her capacity as representative.

A search for "Liz VanLeeuwen" in Oregon Digital yields several results, many of them photographs of the representatives and mentions of her in university periodicals. 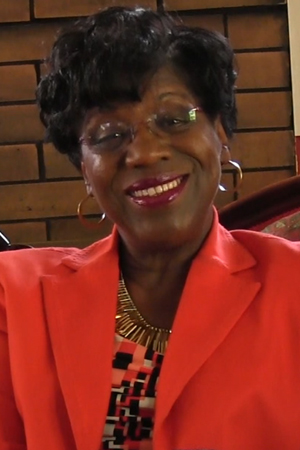 Margaret Louise Carter was born in Shreveport, Louisiana in 1935, the eighth of nine children and the youngest girl in her family. A talented singer and speaker as a youth, Carter began participating in oratorical contests at an early age and also sung on a semi-professional level. She began attending school in Shreveport when she was seven, because she was considered too small to start school earlier. Because she was a strong student, however, she wound up skipping a few grades and was finally matched up with students of her own age by the time she had reached the eighth grade. She graduated as salutatorian of her senior class.

From there, Carter enrolled at Grambling State College on a music scholarship. After two and a half years at Grambling, Carter married and dropped out of school. In the years that followed, Carter raised a large family of her own while working, variously, in an ammunition plant, and selling Amway, Avon and Fuller Brush products.

In 1967, Carter escaped what had become a violently abusive relationship by moving to Oregon with her five children. Finding work as a teacher's assistant in the Portland Public Schools, Carter was eventually able to return to college. She began by taking classes at Portland State University, and graduated in 1972 with a bachelor's degree in Education. She then started teaching at Albina Youth Opportunity School, where she met one of the lead professors of Oregon State University's Portland-based master's in counseling program. In spring 1973, she enrolled in the program, and in winter 1974, she completed her master's of education in educational psychology, with a focus on counseling. Her OSU degree in hand, Carter became a counselor at Portland Community College, where she worked for the next twenty-seven years.

In 1983, Carter was approached by a bipartisan group who asked her to run for state office. Carter eventually agreed to do so and, in 1984, she became the first African American woman elected to the Oregon Legislature. She took office the following January and spent almost twenty-eight years serving in either the Oregon House or Senate. During her early years in Salem, Carter passed a bill declaring Martin Luther King Jr. Day to be an official holiday and another requiring the divestiture of holdings in apartheid-governed South Africa. She also pushed a pro-education agenda that included the creation of regional skills-training centers as well as summer programs for kids. A member of the Legislature's joint budget committee, Carter was chosen as chair of the Oregon Democratic Party in 1996.

Carter ended her stint in the House in 1997, having served the full extent of her term limit. In 2000, she won an open seat in the state Senate, and in 2005 she was selected to be Senate President Pro Tempore. The following year, Carter was named Oregon Statesman of the Year by the Oregon Business Association and also served as president of the National Organization of Black Elected Legislative Women. During much of her Senate tenure, Carter was also the CEO of the Urban League of Portland. After the 2009 legislative session ended, Carter left the Senate to become deputy director of Oregon's Department of Human Services. She retired from the department in 2014.

An oral history interview was conducted with Carter as part of the Oregon State University Sesquicentennial Oral History Project, where she narrates her family life, her move to Oregon, her educational pursuits, and experience in politics.

Carter is also mentioned throughout the Urban League of Portland Records, held by SCARC.

The Oregon Historical Society has created an entry in the Oregon Encyclopedia for Margaret Carter that details her early life, educational history, political pursuits, and honors and awards received.

Additionally, there are several mentions of Carter in The Daily Barometer and the Oregon Stater.