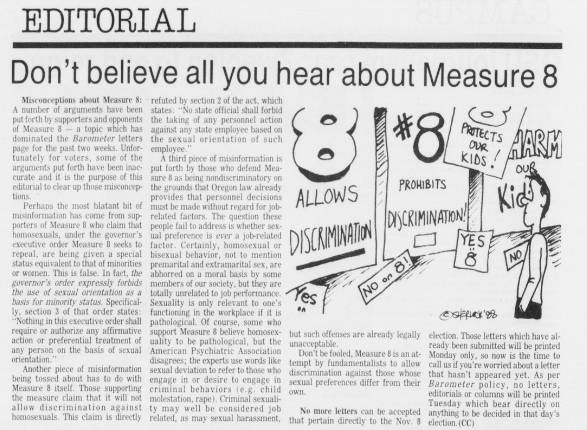 Order 8720 into law, which banned employment discrimination within the state executive branch on the basis of sexual orientation. The following year, the Oregon Citizen's Alliance, aided by other conservative activist groups around the state, qualified the Oregon Revoke Governor's Authority to Ban Sexual Orientation Discrimination, Measure 8 to appear on the November 8, 1988 Oregon ballot. The measure in full read,

Question - Shall voters revoke Governor's authority to ban discrimination, based on sexual orientation, in state executive department employment and services?

Explanation - Enacts new law. Revokes Governor's order which bans discrimination, based on sexual orientation, both in executive branch employment and in carrying out executive branch duties within state government. Measure provides that no state official shall forbid taking personnel action against a state employe because of the employe's sexual orientation. Measure permits state officials to forbid taking personnel actions against state employes [sic] based on nonjob related factors. For the purposes of this measure, sexual orientation means heterosexuality, homosexuality, or bisexuality."

The measure was approved with 52.75% of the vote, and the executive order and related authority was rescinded, as were any job protections for LGBTQ+ individuals employed by the state. This measure remained in effect until the Oregon Court of Appeals determined it was unconstitutional in Merrick v. Board of Higher Education, and the Oregon Supreme Court declined to hear the appeal.

In addition to the materials held by OSU, there are a number of other collections that document the passage of Measure 8: