Question -- Shall constitution set limits on property taxes, and dedicate them to fund public schools and non-school government operations?

Summary -- Amends constitution. Limits 1991-1992 property taxes for public schools to $15, and property taxes for non-school government operations to $10 per $1000 of market value. Schools limit gradually decreases to $5 per $1000 in 1995-1996 and after. Government operations limit remains same. Limits do not apply to government assessments, service charges, taxes to pay certain government bonds. Assessments, service charges shall not exceed cost of making improvements, providing services. General Fund to replace, until 1996, school funds lost due to school limits" 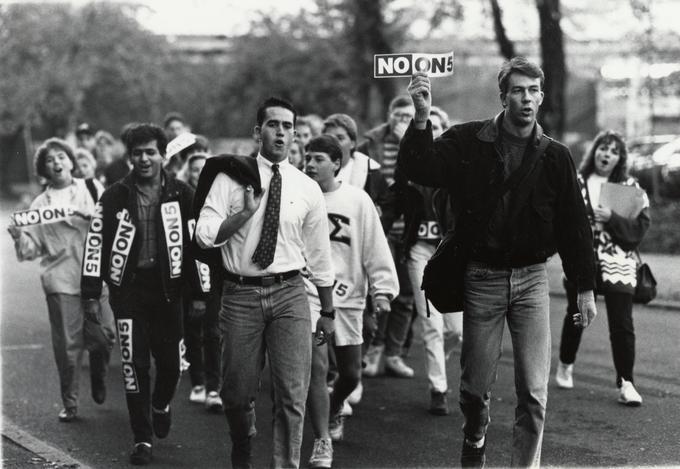 Prior to Measure 5, tax districts levied taxes based on budgetary needs and tax rates were determined based upon the full market value of property as assessed by county assessors. When the levy was determined, it was then divided by the total real market value of all properties in a tax district which produced the district tax rate. Under this system, imposed taxes and levies became indistinguishable, though most levies were legally limited to a maximum annual growth of 6% with any levy growth over 6% becoming subject to voter approval. The difference in the district tax rate depended year-to-year on the construction within the district, increases or decreases in property value, and a variety of other factors that might cause the tax rate to rise or fall, creating variability in yearly tax liability by property.

The effects of the diminished funding for schools were felt acutely at OSU, as a student group formed to urge the legislature to convene a special session to mitigate the effects of the measure's implementation. Then-President Byrne released a statement about the effects of the implementation of Ballot Measure 5, namely that it would prompt university budget cuts at approximately 20%, an estimated loss of nearly $30 million, approximately 3,000 students, 800 faculty/staff, and a higher tuition for students. He also emphasized that the budgetary cuts would result in fewer academic programs, including cuts to Education, Telecommunications, Film & Speech, and the cutting or relocation of the schools of Journalism, Broadcast Media, Religious Studies, and Language Arts.

For more information about the measure, the Oregon Historical Society has published a brief historical recounting its drafting, passage, implications, and ballot measures and bills that followed Ballot Measure 5.