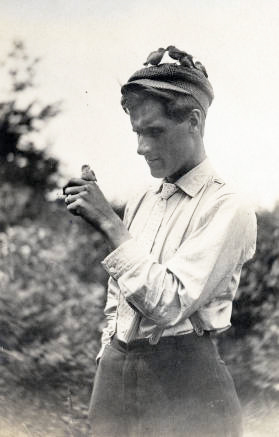 William Finley (b. 1876 - d. 1953) was a wildlife conservationist and photographer who helped to found the Oregon Audobon Society in 1902, and served as its second president. Born in Santa Clara, California, Finley moved to Oregon with his family at age 10. He returned to California to attend UC Berkeley, but made Oregon his permanent home. His photography and writing was influential in the development of early American environmental legislation: he was intimately involved in organizing an Oregon chapter of the Audubon Society, and lobbying the state government for the passage of the Model Bird Law, which criminalized the killing of nongame birds.

In 1906, Finley was elected president of the Oregon Audubon Society, and in 1907, Finley both published his first book American Birds and married. He and partner Herman Bohlman's photography came to influence then-President Theodore Roosevelt in the creation of wildlife refuges across the nation. Later, Finley was recruited to the cabinet of Governor West, having been appointed to served as State Fish and Game Commissioner. During his 8 years as a state official, he also served as the state game warden and the state biologist, and worked to expand the state's force of game wardens. In 1925, following a brief hiatus, Finley was reappointed to the State Game Commission. He served in this role while maintaining a rich professional writing and filmmaking career. He passed away in 1953, and has a number of wildlife refuges and landmarks named in his honor -- in the Willamette Valley, the William L. Finley National Wildlife Refuge was designated in his honor in 1964.

The Oregon State University Special Collections and Archives Research Center holds the William L. Finley Papers which document his work as a wildlife conservationist, author, lecturer, photographer, and filmmaker, alongside the work of his wife, Irene, and his photography partner, Herman Bohlman. Included within the collection is a substantial number of correspondence and information surrounding conservation bills introduced in the legislature and the establishment of the state game commission.

A large number of William Finley's photographs have been digitized and are available to view on Oregon Digital.

Several of Finley's films are available to view online as well.