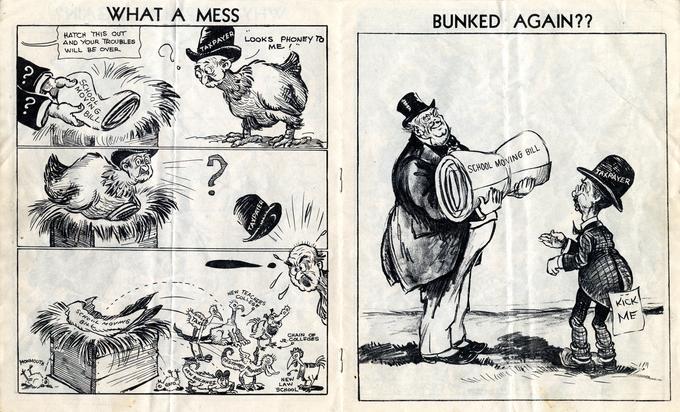 The Zorn-Macpherson School Moving Bill (official title: Bill Moving University, Normal and Law Schools. Establishing Junior Colleges.) was an initiative petition on the November 1932 general election ballot. The bill provided for the consolidation of the University of Oregon and Oregon State College at the Corvallis campus to form the Oregon State University; moving of the normal schools from Monmouth, Ashland, and La Grande to the campus in Eugene; moving the law school from Eugene to Salem; closing of the normal school at Monmouth; and creation of junior colleges at Ashland and La Grande. The Zorn-Macpherson initiative petition campaign was the largest and most expensive in Oregon educational history up to that time. The bill was resoundingly defeated by a vote of more than 6 to 1.

Henry Zorn was a farmer near Champoeg in Marion County and President of the Marion County Taxpayers Equalization League, one of the sponsors of the initiative petition.

Hector Macpherson was a faculty member in economics and sociology at Oregon Agricultural College from 1911 until 1926, when he resigned his faculty position to offer his services to the movement for reorganization of higher education in Oregon. He was elected to the State Legislature in 1927, 1929, and 1939.

The Zorn-Macpherson Petition, 1932: A Study of the Development of Higher Education in Oregon by J. David Cunningham (Ph.D. dissertation, University of Oregon) includes a detailed analysis of this initiative petition as well as biographies of Zorn and Macpherson.

The Special Collections and Archives Research Center holds the Zorn-Macpherson Bill Collection, which is composed primarily of correspondence, newspaper clippings, pamphlets, and broadsides relating to the bill, representing both opposition and favor for the bill. It also includes information about the re-organization of higher education in the late 1920s through early 1930s, establishment of the Oregon State System of Higher Education, and appointment of William J. Kerr as Chancellor in 1932.

SCARC also holds other collections that make note of the Zorn-Macpherson Bill:

The full text of the Bill with arguments both in favor and against the bill can be found in the 1932 Voter's Pamphlet, held by the Oregon Secretary of State.

Finally, a search for "Zorn-Macpherson Bill" in Oregon Digital yields several results, many of them scans of broadsides and pamphlets related to the bill.