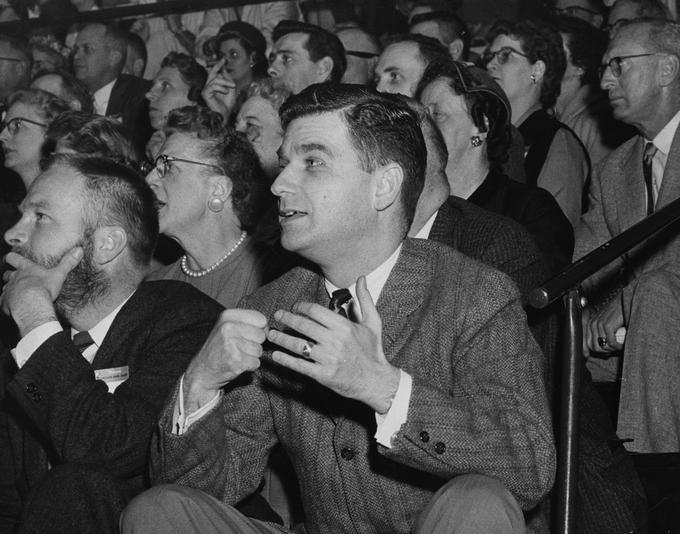 Mark Hatfield's interest in politics began at age 10, when he became involved in Herbert Hoover's reelection campaign in high neighborhood. He would later become a tour guide at the Oregon State Capitol Building. He attended Willamette University, working part-time for the Oregon Secretary of State during his time as a student. Following his World War II service, he enrolled at Stanford University to earn a master's degree in political science, which he received in 1948. He then returned to Salem to become an assistant professor of political science at Willamette University.

At 28, he was elected to the Oregon House of Representatives, making him the youngest legislator in Oregon at the time. He served as a legislator in the Oregon Legislature's lower chamber for 2 terms, before he ran for and won a seat in the Oregon State Senate in 1954. Following this term, Hatfield ran for Oregon Secretary of State and won this seat, becoming the youngest person to serve in the position in Oregon history. He remained in this position until 1959, when he then resigned to run for Governor. He won the governorship that same year, becoming the youngest person to hold the office at the time, and was reelected in 1962. Hatfield announced his candidacy for the U.S. Senate seat soon to be vacated by Maurine Neuberger, and won the seat in 1966. He remained in the Senate until 1997, and he served as the chair of the Senate Appropriations Committee from 1995 to 1997. He retired from public service in 1997 and joining the faculty at George Fox University.

The Special Collections and Archives Research Center has a number of collections with traces of Hatfield's presence.

There are also a number of photographic collections that depict Hatfield, namely the John H. Gallagher, Sr. Photograph Collection, the President's Office Photographs, and the Robert W. Henderson Photographic Slides Collection. In addition, the News and Communication Services Records includes a subject file about Hatfield, as do the Alumni Association Records.

Finally, a search for "Mark Hatfield" in Oregon Digital yields several results, many of them photos of the former governor. 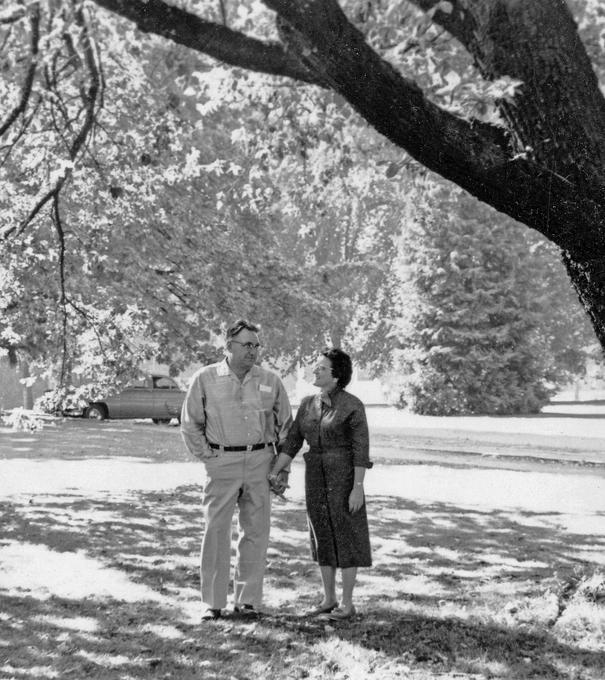 George L. Crookham (1907-1999) studied botany and plant breeding at Oregon State College intermittently during the years 1927-1931. In 1929, he and a friend, Don Baldridge, purchased Crookham Seed Company in Caldwell, Idaho (now known as Crookham Company) from Crookham's father; his college studies were interspersed with business and crop responsibilities.

Founded in 1911, Crookham Company was the first company to produce hybrid sweet corn seed on a commercial scale in the 1930s.

In addition to his business activities, Crookham served as mayor of Caldwell, Idaho; an Idaho state legislator (1955-1961); and first Chairman of the Idaho Water Resources Board in 1968. Crookham was a candidate for Idaho governor in 1962 and was instrumental in the adoption of a sales tax in Idaho.

The George L. Crookham Memorial Scholarship was established in 2001 by Crookham's daughter, Judith C. Krueger, as an award for a student in horticulture at Oregon State University with an interest in plant breeding.

The Special Collections and Archives Research Center holds the George L. Crookham Papers, which detail his experience at Oregon State College as well as his political and business ventures.

In addition, Crookham's work on natural resource, public works, and his service on the Idaho Water Resource Board are well-documented in the John F. Streiff Papers, the Len B. Jordan Papers, and the Frank Church Papers. 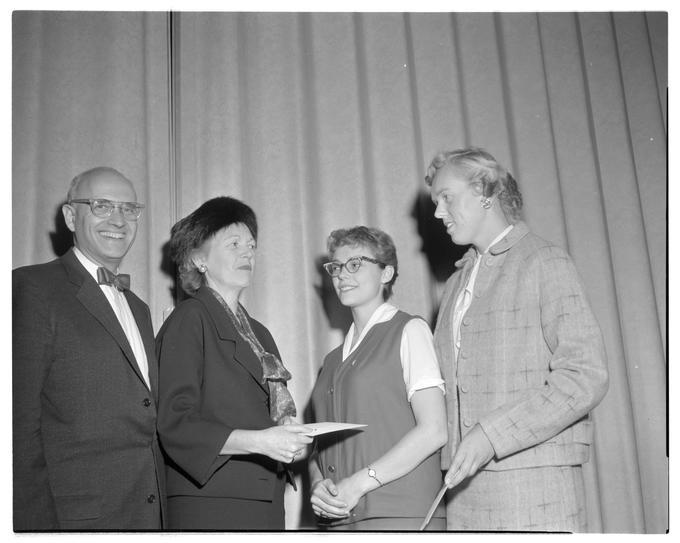 Maurine Neuberger was born in Tillamook County, Oregon in 1907 and attended Oregon College of Education, eventually transferring to the University of Oregon and graduating in 1929 with a Bachelor of Arts. She enrolled in graduate study at the University of California at Los Angeles, and later became a public school teacher. In 1950, she entered politics, serving in the Oregon House of Representatives, serving until 1955. She also served as a member of the board of directors of the American Association for the United Nations during this period.

After her husband, Senator Richard Neuberger, died in office in 1960, she won a special election to fill his vacancy. She was reelected in 1961, but opted to not run again in 1966. She remains the first and only woman ever elected to the U.S. Senate from Oregon. John F. Kennedy appointed her as a member of the Presidential Commission on the Status of Women in 1961.

Following her time in politics, she because a lecturer of consumer affairs, the status of women, and American government at Reed College, Boston University, and Harvard University. She died in 2000.

The Special Collections and Archives Research Center holds the Richard L. and Maurine B. Neuberger Papers, which are composed primarily of senatorial correspondence files regarding agriculture in the state of Oregon.

In addition, the Oregon Historical Society Research Library maintains a collection of materials pertaining to agriculture, commerce, conservation, social security, and public lands in the Maurine and Richard L. Neuberger papers. The Oregon Historical Society also conducted two oral history interviews with Maurine Neuberger, one in 1978 and one in 1991, and maintain a photograph collection that documents the lives of Maurine and Richard.

A search for Maurine Neuberger in Oregon Digital yields several results, many of them photographs of the senator, as well as mentions of Neuberger in OSU university periodicals.

Neuberger's political collection is held at the University of Oregon, but it is currently unprocessed. However, a preliminary finding aid exists that and includes an option to submit a notice of interest for an unprocessed collection. 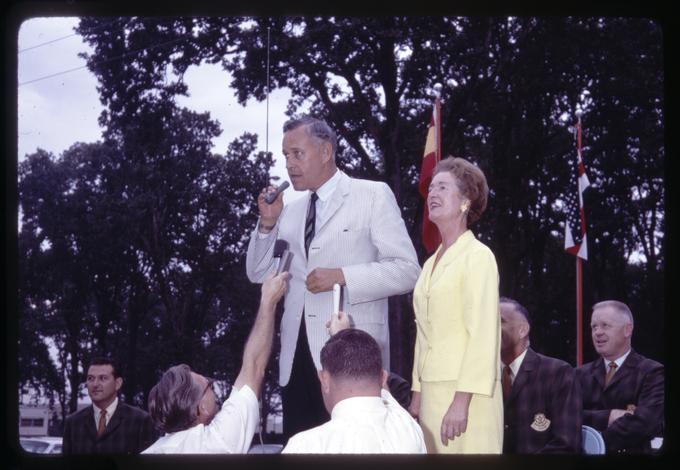 Thomas Lawson McCall (b. 1913 - d. 1983) was born in Massachusetts and spent his childhood and adolescence living in Massachusetts and Oregon. He attended the University of Oregon, where he studied journalism. He graduated from UO in 1936 and began work at The Bend Bulletin newspaper. He then moved to Moscow, Idaho to work for The Daily Idahoian until he was asked to leave in 1942. Upon his departure from Idaho, he was offered a position at The Oregonian, and later worked for KGW, an affiliate radio station. He worked at KGW until he began working as Douglas McKay's personal assistant in 1949. He returned to the radio station in 1952, only to depart again in 1955 to work at KPTV, Oregon's first TV station. He left shortly after due to concerns with management and returned to KGW in time to help launch KGW-TV in 1956.

He first attempted to run for the seat representing Oregon's third congressional district and lost to Edith Green in the general election. In 1964, he ran for Secretary of State and won, serving in that position until his election to the Governor's office in 1966. He won a second term in 1970. His eight-year tenure as governor brought a number of progressive environmental policies, including the nation's first container-deposit law, legislation mandating the cleanup of the Willamette River, codification of public ownership of beaches, and a statewide land-use planning system. He was termed out and therefore ineligible to run in 1974. He tried once more to run for governor in 1978 but didn't make it past the Republican primary.

He returned to journalism, and spent the last years of his life fighting against attempts to repeal the statewide land-use planning system. Measure 6 -- the ballot measure introduced to repeal the legislation -- failed in 1982, and McCall passed away just months later in January 1983.

SCARC holds the Inaugural Address of Tom McCall, Governor of Oregon, to the Fifty-Fourth Biennial Legislative Assembly in the History of the Pacific Northwest Rare Book Collection.