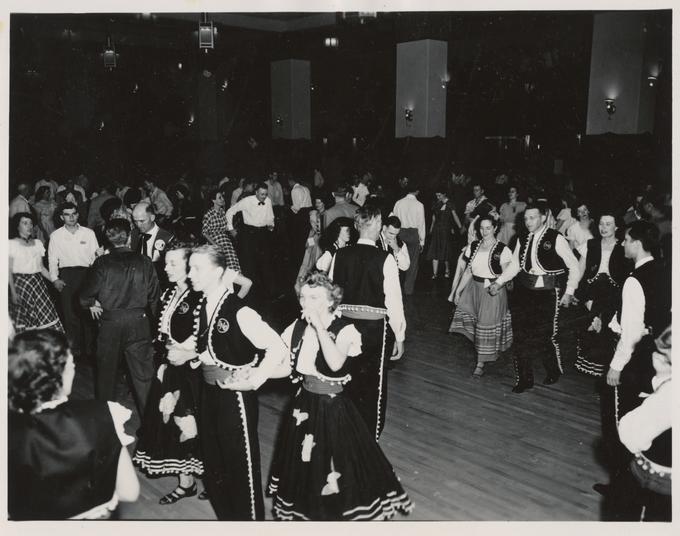 *Beaver Yearbook Photographs, 1938-2005 (P 003)
The Beaver Yearbook Photographs are comprised of numerous accessions of print and born digital photographs captured for use in the Beaver Yearbook. In addition to documenting annual events such as homecoming, Dad's, Mom's, and Siblings Weekends, and end-of-term commencements, the photographs in this collection also depict campus buildings, classroom scenes, athletic games, shots of student organization membership and events, fraternity and sorority members, intermural sports, and students engaged in everyday activities in dormitories, classrooms, and outside in the quads. A preliminary box list for the collection can be found here.

Leo George and Ruth Ann Kramer Papers, 1951-1982 (MSS Kramer)
The Kramer Papers consist of materials generated and collected by the Kramers during the year that Leo George Kramer was a student at Oregon State College in 1951-1952. The letters in the collection were written by Ruth Ann to her family in Cincinnati between June and December 1951 and describe her job with the Extension Service, Lee's classes, concerts and plays on campus, the library, homecoming weekend activities, international students, and outings to nearby parks and towns (Box 01). 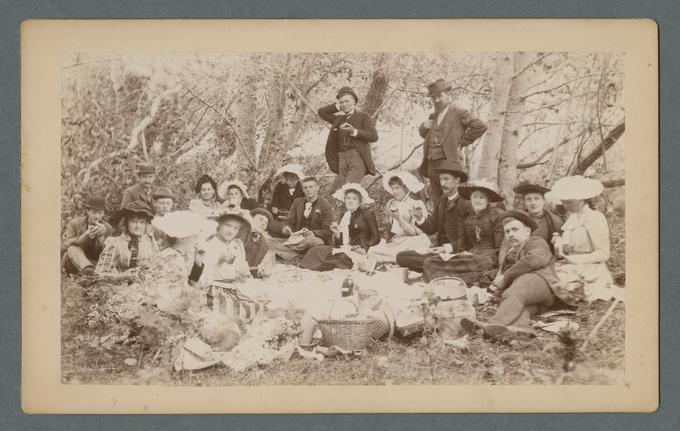 Oregon Agricultural College (OAC). The majority of the images appear to have been produced around 1910, during Arbuthnot's time as the Athletic Director of the College.The photographs depict Arbuthnot and other individuals hiking and exploring, diving into and swimming in the Marys River, taking canoeing and boating trips on the Willamette and Columbia Rivers, visiting Marys River Dam, setting off on hunting trips, posing with fish and game (living and dead), discovering ship wreckage on the coast, and climbing on "Jump Off Joe" near Yaquina Bay. Arbuthnot was Athletic Director from 1906 to 1918 and the coach of the OAC wrestling team in 1911-1917 and 1920 (Box 01). The entirety of this collection has been digitized and is available online.

Frederick V. Betts Scrapbook, 1926-1964 (MSS Betts)
The Frederick V. Betts Scrapbook consists of photographs and ephemera created and assembled by Betts during his student years at Oregon Agricultural College in 1926-1928. The scrapbook includes photographs of campus buildings, snow on campus, a flood in downtown Corvallis, and recreation on the Willamette and Marys Rivers. Student outings and campus events such as homecoming are also depicted (Box 01).

Daniel P. and Doris Dow Murphy Papers, 1937-1966 (MSS Murphy)
The Murphy Papers consist of a scrapbook, photographs, ephemera, and publications assembled by Daniel P. Murphy and Doris A. Dow during their student years at Oregon State College. Photographs in the collection include images of Doris with friends and other residents of Jameson House; campus buildings; the commencement procession of students through campus; students on a Newman Center field trip to Silver Falls, at a beach on the Oregon coast, and at a swimming pool in Benton Lane Park; and a picnic and other student activities (Box 01).

Vane G. Gibson Collection, 1908-1961 (MSS Gibson )
The Vane G. Gibson Collection consists of two photograph albums, a clippings scrapbook, and related materials documenting the student years of Gibson and his wife, Fern Loughridge Gibson, at Oregon Agricultural College (OAC) and their activities during the 1920s and 1930s. The second photograph album (1909-1913), an OAC Stunt Book, was apparently assembled by Fern Loughridge. Most of the images in the album are of student outings, picnics, and trips to Newport (Box 01). The album also includes dance cards and clippings announcing the marriage of Gibson and Loughridge in 1913.

Irwin Betzel Papers, 1911-1920 (MSS Betzel)
The Irwin Betzel Papers are comprised of materials assembled and generated by Irwin Betzel during his years as an Oregon Agricultural College student and OAC Instructor of Pharmacy. Included are two scrapbooks, a photograph album, several loose photographs, three pharamcy notebooks, and a small collection of pharmacy ephemera. The photographs and ephemera document the activities of Betzel, including his participation in the Oxford Club, OAC Cadets, and various Class of 1915 social activities including class picnics, plays, dances, and bonfires (Boxes 01 - 03). 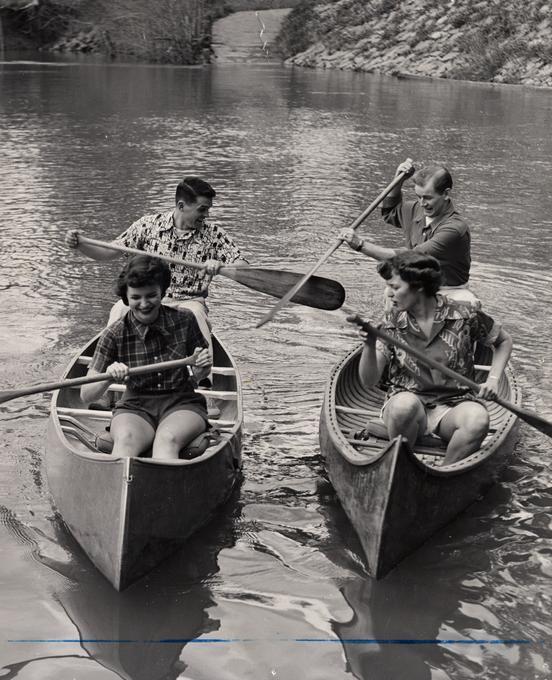 *George A. Sense Photograph Collection, 1930-1931 (P 249)
The George A. Sense Photograph Collection consists of black and white photographic prints taken by Sense during his student years at Oregon State Agricultural College. The collection includes images of his roommates and friends, as well as depictions of the Rook Bonfire, campus buildings, the Marys River "swimming hole" (Box 01), the university President's house, a group shot of the freshman football team, and the boarding house where Sense lived. The images are identified and dated.

A. Isabella Downs Scrapbook, 1910-1916 (MSS Downs)
The A. Isabella Downs Scrapbook was assembled by Downs during her student years at Oregon Agricultural College and documents student life and the college environment during the mid-1910s. The scrapbook includes many images of female students; student outings to the Oregon coast (Box 01), including Seaside; and campus events such as football games, commencement, May Day pageants, the annual tug-of-war, and homecoming. Photographs of snow on campus and students skating and playing ice hockey on a frozen lake are included (Box 01). Snapshots of picnics, camping trips (Box 01), and an automobile driving through a dry landscape are included; several images of women in the woods with a rifle are of special note.

A. Freeman Mason Scrapbook, 1910-1922 (MSS Mason)
The A. Freeman Mason Scrapbook documents Mason's student years at Oregon Agricultural College in 1910-1914 and includes photographs; dance cards, ticket stubs, and other ephemera; programs; clippings; and correspondence. The photographs include many images of students (individuals and groups), including students on outings, playing in the snow, and canoeing (Boxes 01 - 02). 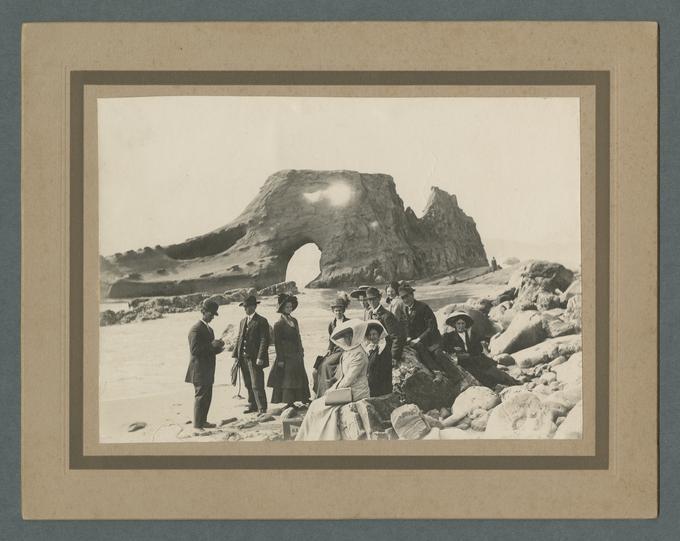 The Willetta Moore Photograph Album consists of images assembled by Moore during her student years at Oregon Agricultural College in 1913-1916. Of special note are images of outdoor pageants and processions; outings, cookouts, and picnics, including an excursion to Newport; canoeing (Box 01); Junior Flunk Day; women playing tennis; a July Fourth parade float; and graduates at commencement activities. The album includes many images of women students, including one of a group of women wearing bandages on their upper arms apparently after receiving vaccinations with the caption "preparedness". 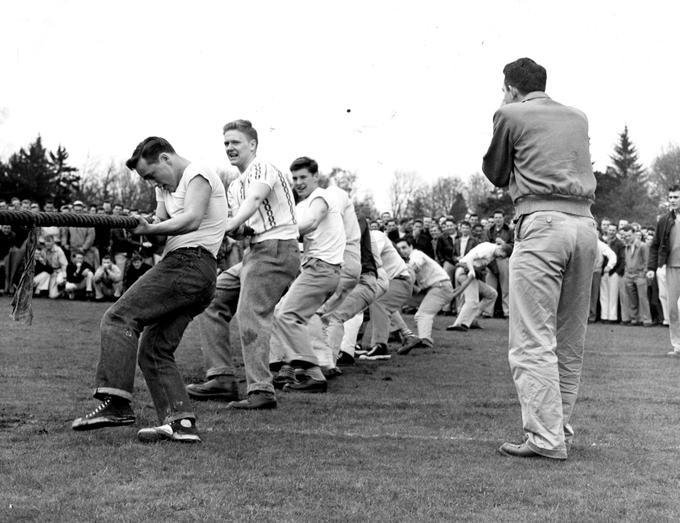 James T. Gaither Photograph Collection, 1917-1922   (P 275)
The James T. Gaither Photograph Collection consists of images taken and assembled by Gaither during his student years at Oregon Agricultural College from 1917 to 1922, when he earned a BS degree in Commerce. The bulk of the photographs are of the annual tug-of-war between the college freshmen and sophomores. The collection also includes a snapshot of the rook homecoming bonfire (Boxes 01 - 02).

Davis Allen Photographs, circa 1917-1921 (P 261)
The Davis Allen Photographs consists of photographs taken by Davis Allen while he was a student at Oregon Agricultural College between 1917 and 1921 depicting student activities and college buildings. The images primarily depict campus views and annual rituals such as the homecoming bonfire, "burning of the green," the bag rush, the rook-sophomore tug-of-war over the millrace, and the queue for fall class registration (Box 01).

Marshall S. Wright Photograph Album, 1915-1928 (P 276)
The Marshall S. Wright Photograph Album was assembled by Wright during his freshman year at Oregon Agricultural College (OAC) in 1915-1916. The album includes photographs of many student activities, including the rook bag rush, rook bonfire, serpentines at football games, and burning of the green caps (Box 01). Of special note are images of construction of the rook bonfire in 1915 by Wright's class (Box 01). 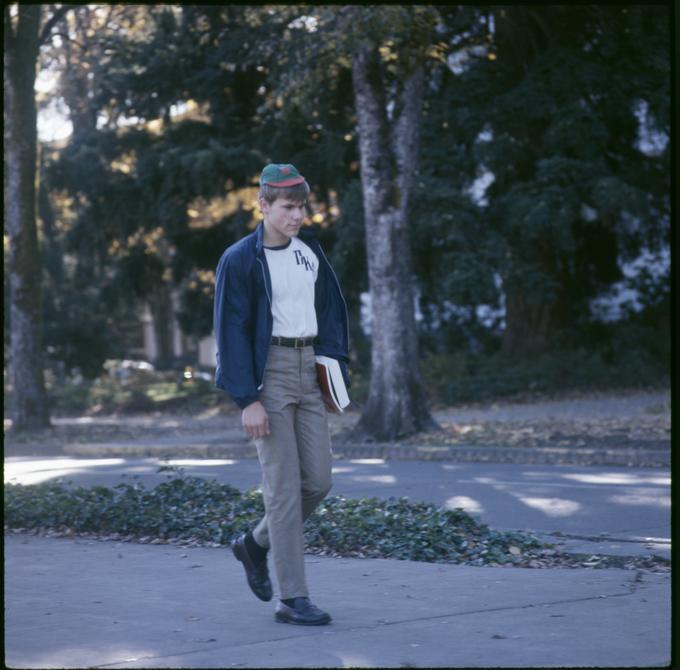 The Clifford L. Smith Photograph Collection consists of photographs assembled by Smith that document student life at Oregon Agricultural College (OAC) in the late 1910s. A number of photos also show many early traditions at Oregon Agricultural College, including the rook bonfire and rook-sophomore tug-of-war at the millrace (Box 01). This collection has been digitized and made available online.

Joe O. Mattson Photograph Collection, 1923-1924 (P 145)
The Joe O. Mattson Photograph Collection consists of images taken and assembled by Mattson documenting student life at Oregon Agricultural College (OAC) in the mid-1920s. The images depict the sophomore-rook tug of war, the homecoming bonfire, and football and basketball players (Box 01). This collection has been digitized and made available online. 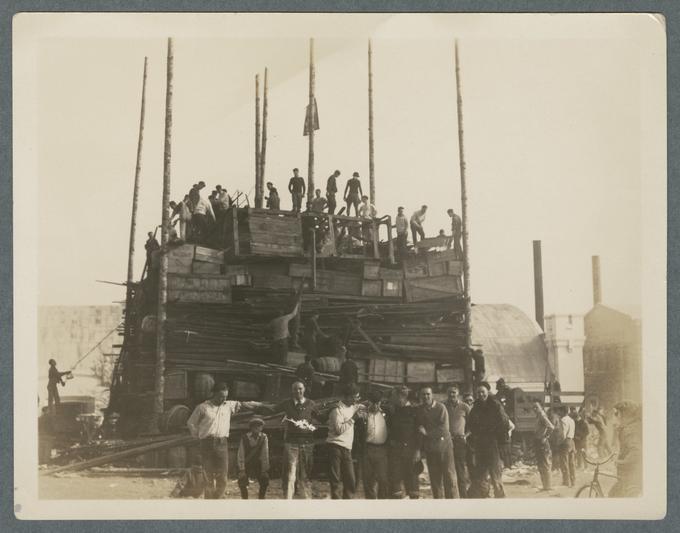 The Harold Troxel Vedder Photograph Collection consists of images assembled by Vedder during his student years at Oregon Agricultural College. The photographs depict campus views and buildings, athletic teams and events, especially football; military training; and student activities. Of special note are images documenting the rivalry between Oregon Agricultural College and the University of Oregon (commonly known as the Civil War) and students guarding the Lady of the Fountain on lower campus, which was frequently a target of vandalism (Box 01). This collection has been digitized and made available online. 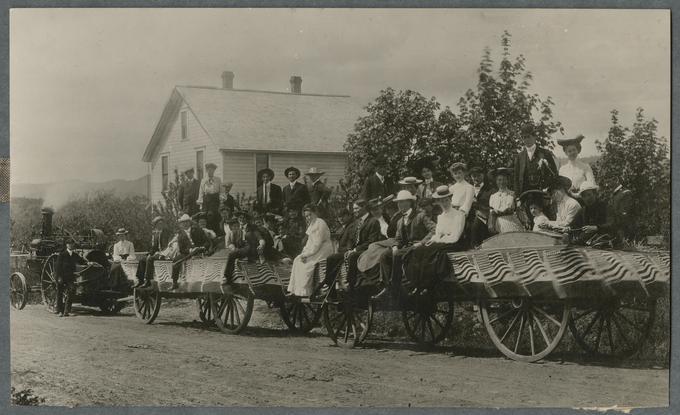 Additional collections relating to student recreation and traditions at Oregon State can be found using the following search terms: