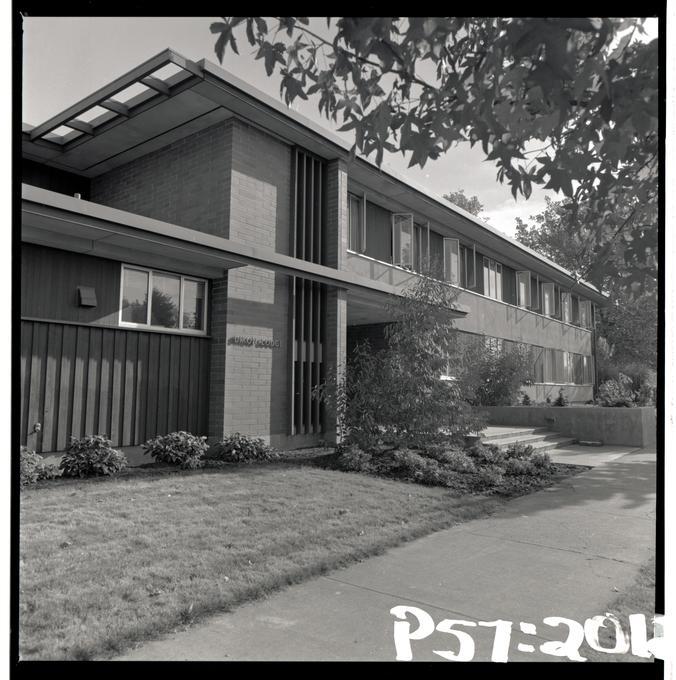 *Dixon Lodge Records, 1963-2013 (MSS Dixon)
This collection consists of materials generated by the Dixon Lodge cooperative house and is made up of photograph albums and scrapbooks documenting the students who lived there. In addition to group and portrait shots of residents, the images also depict various events at the Lodge.

*Oxford House Records, 1966-2014 (MSS Oxford)
The Oxford House Records consist of materials documenting the residence, a women's housing cooperative that existed at OSU from 1966-2014. The collection's materials reflect both everyday life at the house as well as special activities organized by its members, and include certificates, a drawing, greeting cards, handbooks, photographs, plaques, scrapbooks, and trophies. 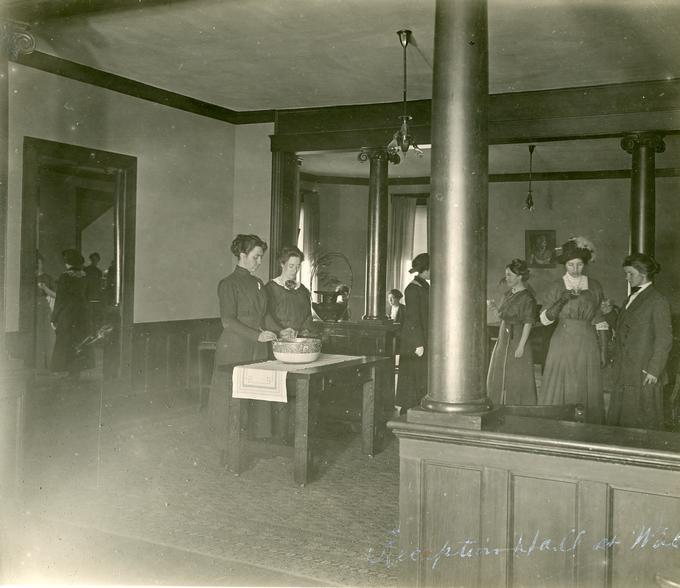 *Avery Lodge Records, 1966-2014 (MSS Avery)
The Avery Lodge Records document the residents of Avery Lodge Cooperative House as well as many of the activities that the house sponsored. A cooperative house for men, Avery Lodge was open on the OSU campus from 1966-2014. This collection consists of materials documenting the Avery Lodge cooperative house and is made up of cds, certificates, constitutions, correspondence, floppy diskettes, a guestbook, manuals, meeting minutes, member tracking cards, newsletters, photograph albums, photographs, a plaque, posters, printing stamps, scrapbooks, USB drives, and a VHS videotape. 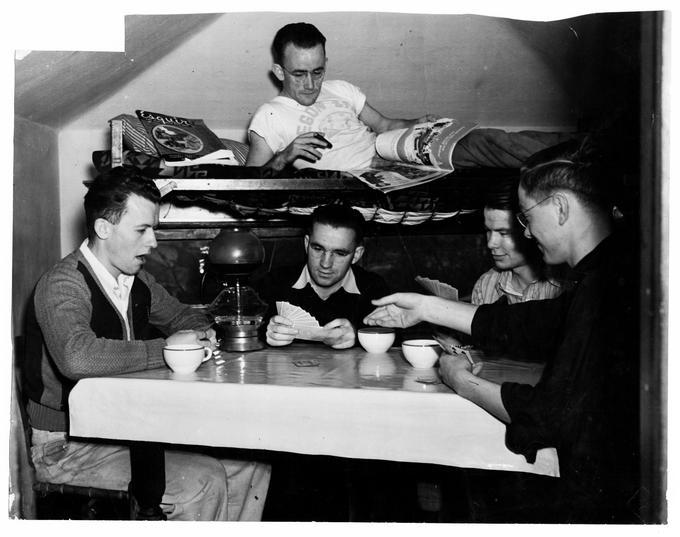 Living Groups Index, circa 1960-1976 (MSS LivingGrps)
The Living Groups Index documents off-campus housing for Oregon State University students from the 1910s through 1970s. The Index consists of individual cards for fraternities, sororities, cooperatives, and other housing clubs. The cards include dates of establishment or charter and, if applicable, the year a local fraternity or sorority affiliated with a national organization. Each card also provides street addresses for the living group through time

*University Housing and Dining Services Records, 1900-2013 (RG 145)
The University Housing and Dining Services Records document the administration of campus housing at Oregon State University for 1930-2005, with the bulk of records representing the 1960s and 1970s. The records reflect major issues in housing policies including co-educational housing, campus security, alcohol use, and self-governance by residents.

Walter R. Baker Photographs, circa 1863 - circa 1930 (P 018)
The Walter R. Baker Photographs consist of images taken or collected by Walter Rawalt Baker. Approximately one-fourth of the images pertain to Oregon Agricultural College between about 1905 and 1909, and include buildings, campus views, students and faculty members. Some of the O.A.C. images were used in the 1909 Orange yearbook. These include several images of the residents of Cauthorn Hall (Box 1, Folder 1-2; Box 2, Folder 5, 7), the men's dormitory during this time, and students' rooms as well as military cadets on campus.

*John L. Robbins Photographs, 1966-1972 (P 295)
The John L. Robbins Photographs consist of photographs taken by Robbins during his student years at Oregon State University in the late 1960s and early 1970s. The images document campus events, student activities, athletics, and campus views and scenes, and include photographs of dormitory life, student organizations, commencement, and protest rallies and marches on campus.

Roy M. Cooley Photograph Album, 1907-1911 (P 302)
The Roy M. Cooley Photograph Album consists of photographic postcards and snapshots assembled by Cooley documenting his student years at Oregon Agricultural College. Several images of Cooley and other male students in their dormitory room, smoking pipes, playing cards, and participating in hazing activities are included in the album; some of these images were probably taken in Cauthorn Hall (Box 01), the men's dormitory (now Fairbanks Hall). 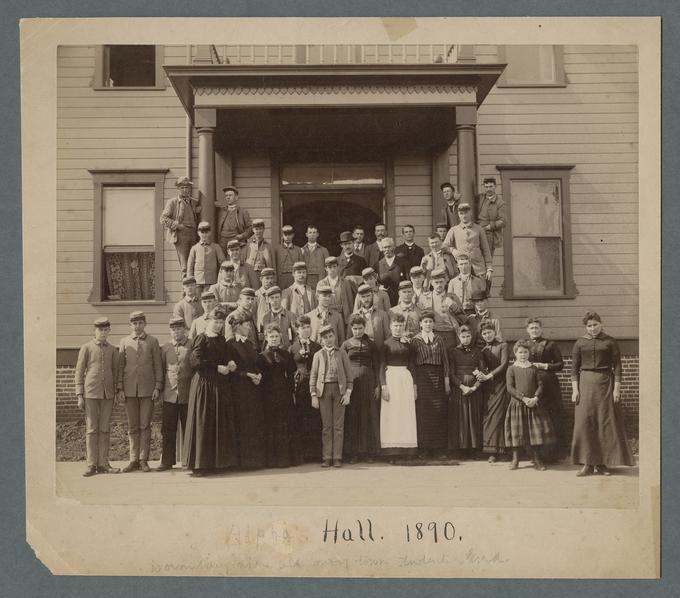 The Smith-Western Company Photographs of Oregon State College consist of images of campus buildings and sorority and fraternity houses. These images were produced around 1955. Buildings and other views pictured include, but are not limited to, the chemical engineering building (Gleeson Hall), Dearborn Hall, the Library (Kidder Hall), the Women's Building (Box 01), and the gates of the east campus entrance. A number of cooperative houses (Box 01) are also pictured.

Harold Troxel Vedder Photograph Collection, 1913-1916 (P 190)
The Harold Troxel Vedder Photograph Collection consists of images assembled by Vedder during his student years at Oregon Agricultural College (OAC). The photographs depict campus views and buildings; athletic teams and events, especially football; military training; and student activities. Of particular note, are photographs of Cauthorn Hall (Box 01), and the interior of an unidentified dorm room decorated with pennants and flags (Box 01). This collection has been digitized and made available online.

*E. B. Lemon Papers, ca. 1910-1979 (MSS LemonEB)
These papers were generated and collected by E.B. Lemon during his years at Oregon State University as Registrar and Dean of Administration. Included in Series V are photographs featuring portraits of Lemon, a view of Lemon on campus in his Cauthorn Hall (Box 03) dorm room and the building itself, and reunions of the graduating class of 1911.

*Alice Kidder Evans Photograph Collection, 1889-1919 (P 144)
This collection consists of photographs assembled by Alice Kidder Evans and her father Andrew Kidder. The photographs are identified and some are dated. Most of the images depict OAC buildings and students. The structures in these photographs include Alpha Hall, Benton Hall, the greenhouse and the Horticulture Building. The students in these images are photographed in their cadet uniforms in formation, in front of dormitories (Box 01), and engaged in entomological fieldwork. 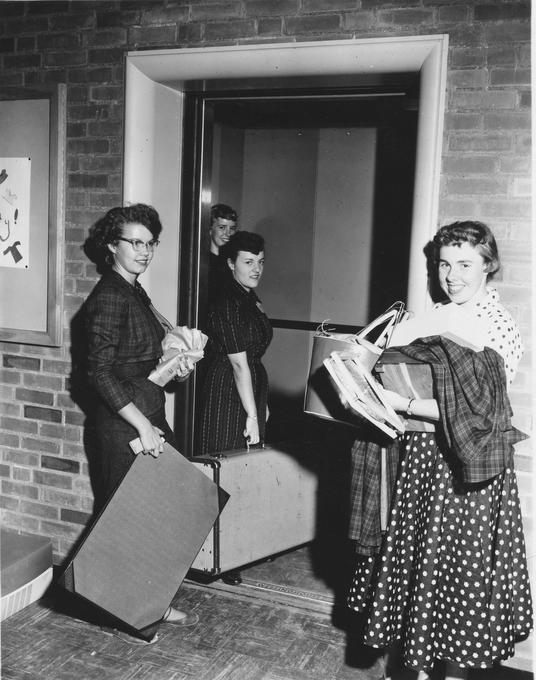 *Neal VanDevender Photograph Collection, 1962-1965 (P 242)
The Neal VanDevender Photograph Collection consists of photographs taken by alumnus Neal VanDevender of social life in the Heckart Lodge (Box 01) residence hall and elsewhere on the Oregon State campus. The collection includes images of students engaged in various hazing rituals and pranks, and also document a Heckart Lodge Christmas party, a farewell party for the lodge housemother, a banquet for a recently engaged student, living quarters inside the lodge, students playing football, and a student "street dance." Various exterior shots of Heckart Lodge as well as other campus buildings are also included among these images. Most of these photographs are dated and identified.

Additional collections relating to housing, cooperative, and/or dormitory life at Oregon State can be found using the following search terms: