Oregon Multicultural Communities Research Collection, 1873-2017 (MSS OMCRC)
This collection pertains to multicultural communities both at Oregon State University and across Oregon. Included are two films: "Black Greeks at OSU" and "For Students, By Students: the struggle for equality at Oregon State University." Materials specifically relating to a peaceful student protest of the election and inauguration of Donald Trump can be found in Box 6, Folder 6, and related materials can be found throughout the collection. A report, "A Discussion of Student Unrest," prepared by the Oregon State Board of Higher Education in 1968, can be found in Box 6, Folder 7. 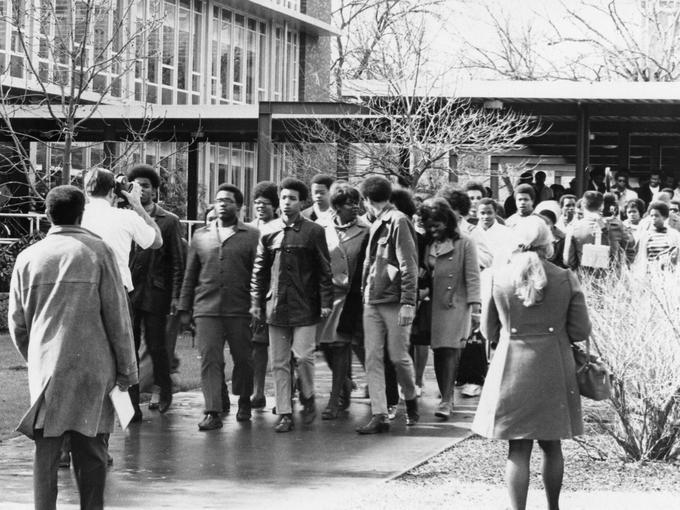 State University students and staff affiliated with the Center, and the campus environment for African-American students at Oregon State since the 1960s. The collection includes guest books, newsletters, newspaper clippings, photographs, posters, signs, and a scrapbook. The scrapbook consists primarily of newspaper clippings and copies of clippings documenting Center activities as well as the history of the Center and the 1969 Black Student Union walkout. Digitized versions of 4 photograph albums are available online. The albums are for the years 1992-1997 (Album 1), 1997-2001 (Album 2), 2001-2003 (Album 3), and 2003-2004 (Album 4). They include images of open houses at the Center; annual events such as Martin Luther King, Jr. Celebrations, Kwanzaa, and Black History Month; retreats; the 1996 boycott; Jesse Jackson's visit to Oregon State in 1992; fashion shows; the dedication of Carrie Halsell Hall; and students and staff affiliated with the Center. The original albums have been retained by the Center. The Black Cultural Center was established at Oregon State University in 1975. 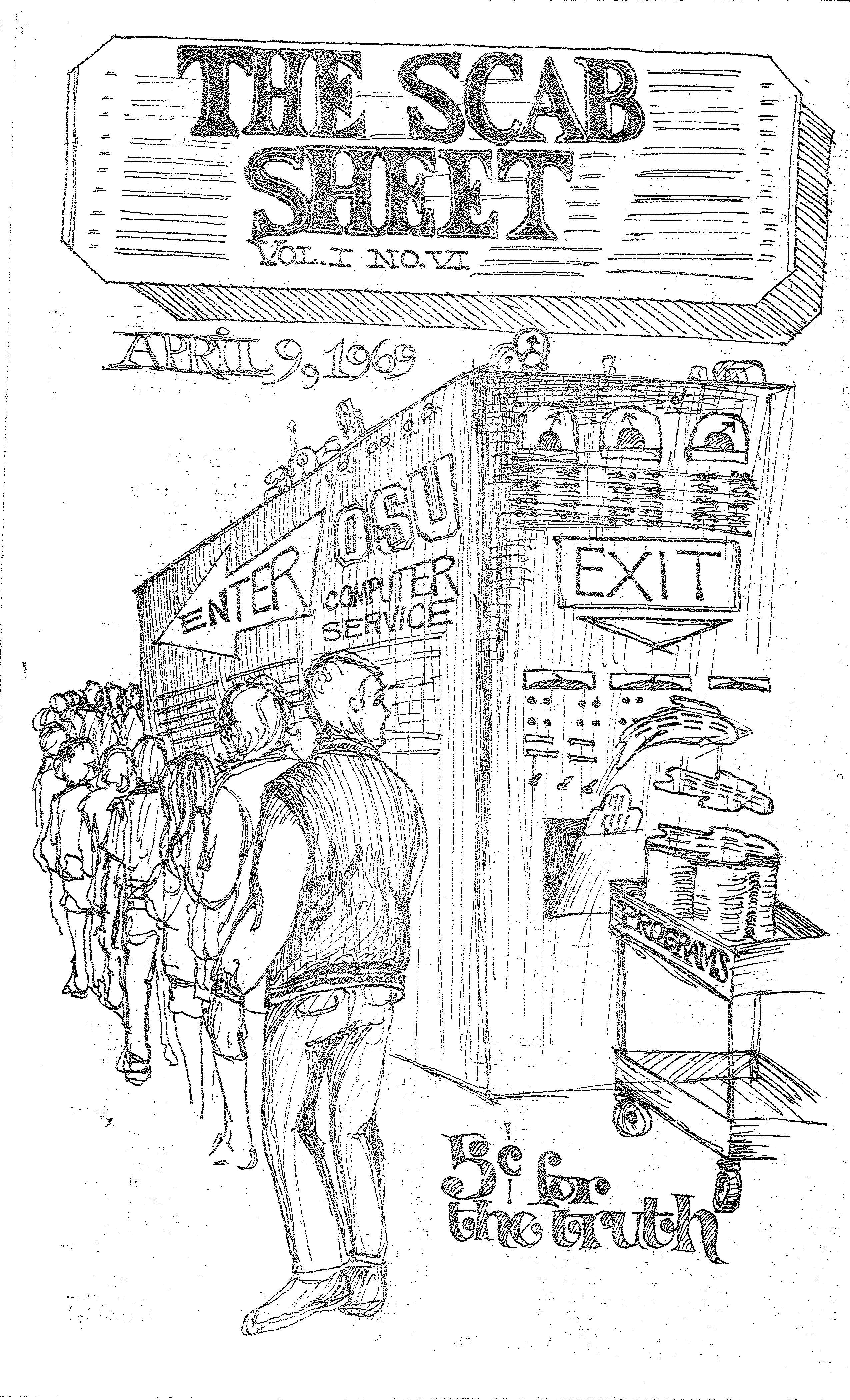 The Underground Newspapers consist of publications, primarily written and produced by Oregon State University students, that were intended as alternatives to the mainstream press.  Most of the publications were issued during the period of student unrest in the 1960s and early 1970s.  The predominant topics are civil rights, specifically racial incidents at Oregon State University, and the war in Vietnam. Militarism, nuclear weapons, and the environment are also addressed in these materials.

*Ed Ferguson Oregon Anti-Apartheid Scrapbook, 1980-2012 (MSS Apartheid)
The Ed Ferguson Oregon Anti-Apartheid Scrapbook consists of newspaper clippings and other related materials assembled by Ed Ferguson, a specialist in African history and faculty member in the History Department at Oregon State University from 1979 to 1991. The scrapbook documents the protest and educational campaign led by the Oregon State University (OSU) African Students' Association (ASA) during 1980-1982 in response to OSU wrestling coach Dale Thomas' association with the South African wrestling community (Box 01). Thomas' hosting of visiting South African coaches and a proposed team tour of that country drew fire because of an international ban on competition with South African athletes as a protest of the racist apartheid political system.

*Information Department Records, 1928-1966 (RG 010)
The Information Department Records includes records of building programs, student activities, and educational projects; the general administrative correspondence of the department; and materials documenting the dedications of Azalea House, Withycombe Hall, and the Food Technology Building. Also included are records of the controversy between William J. Kerr, Wayne L. Morse, and Roscoe C. Nelson; the controversy over Civil Service; and the controversy over which courses to teach at the university. 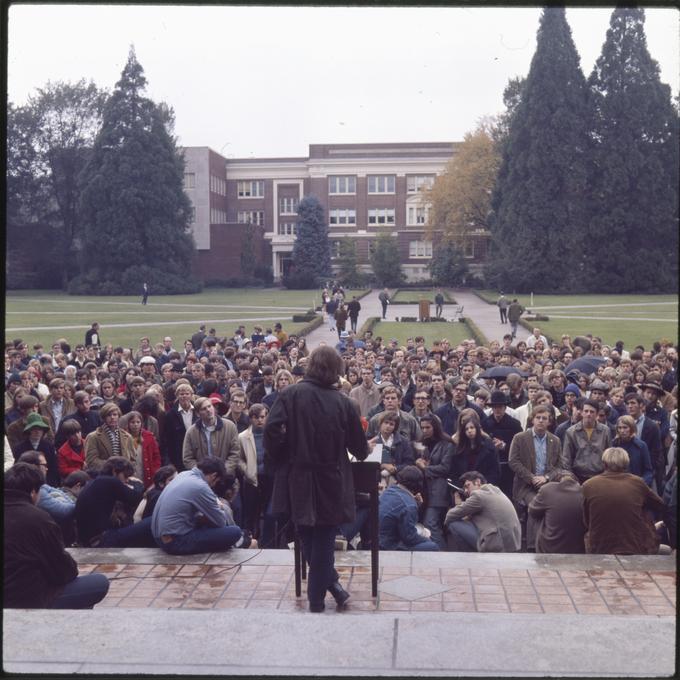 The Geosciences Department Records contain biographical files maintained by the department as well as correspondence generated by Geology Professor William H. Taubeneck. Accession 2002:038 consists of Geology Professor William H. Taubeneck's correspondance. Included among the subjects addressed in the records are: the Oregon State Board of Higher Education's response to student protest and unrest on campus, spatial needs of the Geology Department, the construction of the Earth Sciences building, and the recruitment of students and faculty to the department.

*J. Kenneth Munford Collection, 1866-2000 (MSS Munford)
The J. Kenneth Munford Collection consists of a variety of materials assembled and created by Munford as a student, teacher, writer and editor, and local historian. Series 12 (Box 13) consists of newspaper clippings pertaining to Munford's involvement in Phi Kappa Phi, and a protest lodged by students over the firing of an English Professor, Frank Harper. 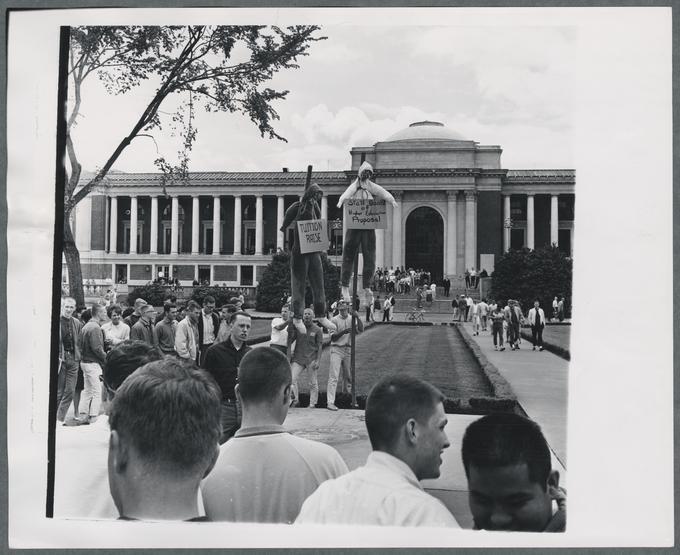 The Associated Students of OSU Records document the administration of student government and its interaction with other campus organizations, offices, and bodies primarily for the 1960s through the 1990s, and include records of the ASOSU Executive Branch, the ASOSU Senate, and the Graduate Student Senate. Box 19 of this collection contains files on apartheid protests and South African disinvestment (1977-1989), and protests regarding the proposed conversion to the semester system (1988).

President's Office Photographs, 1923-1998 (P 092)
The President's Office Photographs consist of photographs documenting the activities the presidents of Oregon State University, primarily from 1960 through 1995, as well as individual portrait photographs of Oregon State faculty and staff from the 1930s through 1960s. Series II includes materials documenting an Armed Forces Day protest by David Moe, which was covered by the Gazette Times (Box 02, Folder 05). 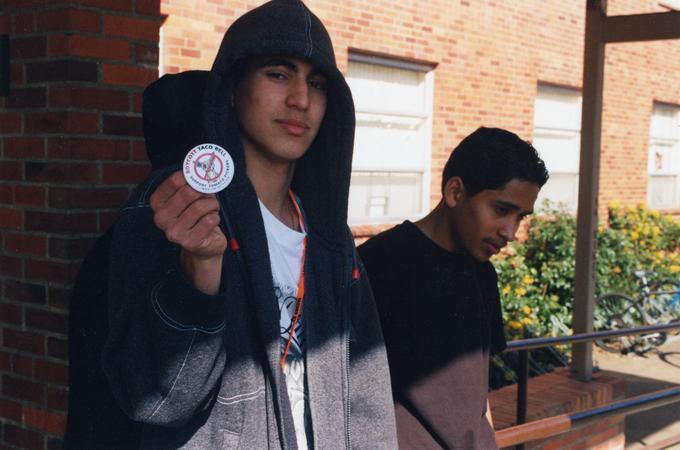 Educacional Photograph Albums documenting the activities and programs of Casa Educacional, including the 2004 National MEChA Conference held at Oregon State University. The Minority Education Office Records consist of one series: I. Casa Educacional Photograph Albums. One of the albums documents the National MEChA (Movimento Estudiantil Chicana/o de Aztlán) Conference held at OSU in 2004 and includes images of a protest march in support of Oregon farmworkers' right to unionize (Box 01). An estimated 700 protestors marched from the OSU campus to a Taco Bell restaurant in north Corvallis and called for a boycott of the fast food franchise. Photographs of Benton County Commissioner Annabelle Jaramillo and PCUN (Pineros y Campesinos Unidos del Noroeste/Northwest Treeplanters and Farmworkers United) President Ramón Ramírez, both of whom participated in the march, are included in the album.

Voices of Oregon State University Oral History Collection, 1995-2015 (OH 009)
The Voices of Oregon State University Oral History Collection consists of oral history interviews conducted by Oregon State students as part of Anthropology 498 (Oral Traditions), History 415/515 (Digital History) and Sociology 418/518 (Qualitative Research Methods) classes, as well as internships within the Special Collections & Archives Research Center. Digital files of the interviews are stored on the SCARC department server and access is provided by staff archivists. Digital File 22 is an interview with Doug Sweet (February 19, 2015) and focuses primarily on student activism and social unrest at OSU during the late 1960s and early 1970s, with particular attention paid to the dismissals of anti-war activists Alan Young, Frank Harper and Michael Popadopoulos from the university faculty.

Additional collections relating to student unrest and protest at Oregon State can be found using the following search terms: