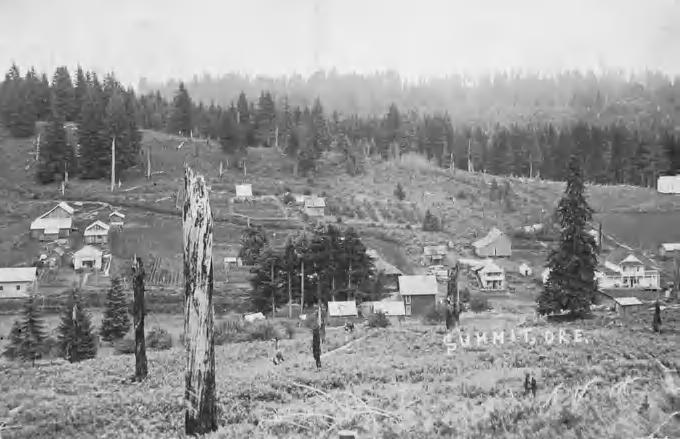 Originally known as Summitville, present day Summit’s name is purely descriptive in origin (Oregon Geographic Names, 1944). Perched at an elevation of 716 feet along HWY 180 north of Blodgett, Summit was platted by William Post in 1885.

As the highest point along the Corvallis to Yaquina Bay railroad route, Summit provided services, often including room and board, to railway workers. In the 1860s, a wagon road travelled through Philomath, Wren, Blodgett's Valley, and Devitt, crossing the Coast Range at what would be the future site of Summit and following the Yaquina River to Elk City; in places, the Corvallis to Yaquina railroad route follows this road.

William and Katie Post came migrated west to Oregon from Missouri in 1876. In 1884, the Posts acquired a quarter section of land in the western portion of Benton County. The house the Posts in Summit built was later used by its subsequent owners, Edward and Storme Strouts, to board railroad crews; Strout was a section foreman for the railroad.

The Matoon General Store, which may have originally been owned and operated by the Posts, was built at the corner of what is now Highway 180 and First Street in 1890. Sometime in the early 1890s, the store was purchased by James Buchanan who, at the time, also owned a store in Wren. In 1896, the store was sold again, to L.M. Matoon; Matoon operated the store until 1902, when he sold it to Titus Ranny. The store was operated by a number of owners over the years: M.E. Underhill (early 1900s); H.L. Bush, and Harry and Lessie Williams (1910-1923); Edgar Plunket, and Alma and Victor Plunkett (1923-late 1940s).

The construction date and exact location of the first school in Summit are unknown, but it is “reported to have been a log building.” In 1900, Summit School #2 was built on a hill overlooking the community; after Summit School #3 was built in 1930, the second Summit School continued to be used as a “play shed.” This newer Summit schoolhouse was in service until 1969.