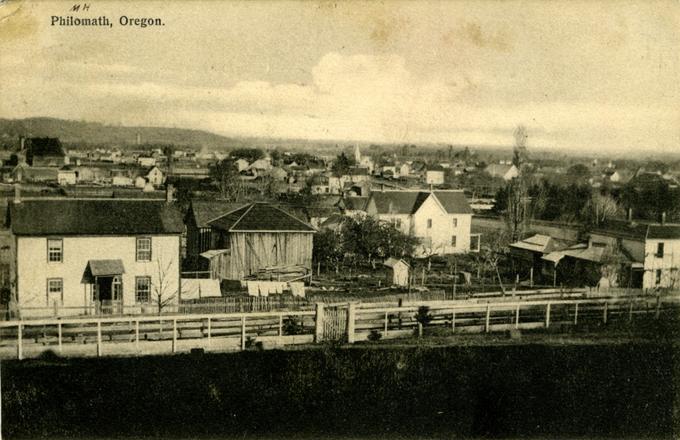 A town less than two miles from the western border of Corvallis city limits, Philomath’s namesake is Philomath College. The word “philomath” is taken from the Greek words philos, meaning “loving” (e.g. philosophy or philanthropy), and manthanein or math-, meaning “to learn” (e.g. polymath).

Chartered by members of the United Brethren Church in 1865, and opened in 1867, Philomath College was built across a sprawling eight acres, a small fraction of the donation land claim half-section owned by David Henderson, and purchased for $2,510. The remainder of the half-section – over 310 acres – was “divided into lots to develop a town around the school.” In 1889, a second college, the College of Philomath, was established just a few blocks away from Philomath College by a “radical faction” of the United Brethren Church. The College of Philomath operated for 23 years, closing in 1913; its neighbor, Philomath College, closed in 1929 due to steadily declining enrollment.

About the same time Philomath College was established, a post office was applied for and named for the college (Oregon Geographic Names, 1944). On October 20, 1882, the city of Philomath was incorporated.

Oregon State University Memorabilia Collection, ca. 1860-present
The Memorabilia Collection is an artificial collection containing items of interest about Oregon State University and to a lesser extent, the city of Corvallis, and the state of Oregon. The collection includes two folders documenting the history of Philomath College (Box-folder 129.19 and 129.20), and a folder documenting the city of Philomath in general (Box-folder 129.21). Items from this collection have been digitized and are available in Oregon Digital.

Jeannette I. Cox Collection, circa 1915-1986
The Jeannette I. Cox Collection consists of photographs of Corvallis (Oregon), nearby communities, and sites throughout Oregon and the Pacific Northwest as well as administrative correspondence of the Pacific Northwest Water Laboratory for the period 1962-1969, when Cox was a secretary to the Director. Cox attended Oregon State College and was a life-long resident of Corvallis and avid photographer. The collection includes roughly 550 images, including images of the Philomath College Building (Box 01).

Collection of Historical Newspaper Issues, 1723-1941
The Collection of Historical Newspaper Issues is comprised of single issues of newspapers dating from 1723 to 1941. The collection includes issues printed in Canada, England, France, Germany, Japan, Scotland, Siberia, and the United States and includes English, French, German, Icelandic, and Japanese-language materials. Areas of emphasis include U.S. military serials, newspapers from the northeastern and northwestern United States, and materials published in the 1910s. Two issues of the Philomath Journal - volume 1, no. 2 (February 21, 1896) and volume 1, no. 3 (April 3, 1896) - are included in the collection (Box-folder 2.20 and 2.21).

Robert W. Henderson Photographic Slides Collection, 1936-1998
The Robert W. Henderson Photographic Slides provide visual documentation of Oregon State University and the state of Oregon from, in bulk, the mid-1950s to the late 1990s. Consisting of nearly 16,000 unique 35-mm color slides, all of which are described individually, the collection depicts a wide range of university activities, particularly as concerns agricultural research and the development of agricultural practices at OSU's county Extension offices and regional Experiment Stations. Other strengths of the collection include faculty, staff and student life at OSU; Oregon's rural communities as viewed from the ground and the air; and imagery from Henderson's travels around the world. Images of Joe Gray fishing near Philomath (image #02694, Box 03); of the Gray farm west of Philomath (images #11238-11239, Box 11); of "field sanitizing experiments" and equipment in fields near Philomath (images #11429, 11446, 11555, Box 11); of a Christmas tree farm south of Philomath (image #15622, Box 15); and of the Philomath College building (image #15628, Box 15) are including in the collection. The Henderson Slides are being digitized for online access in Oregon Digital.

Gerald W. Williams Regional Albums, 1875-2000
The Gerald W. Williams Regional Albums consist of images and ephemera assembled by geographical regions. They were acquired and compiled Williams in the course of his work as a Forest Service sociologist and historian and due to his avocational interest in the history of forestry and the history of the United States, especially that of the Pacific Northwest region. The albums document popular tourist destinations, national parks, the natural environment, prominent natural and architectural landmarks, forests and forest operations, mining, trains and railroads, early towns and cities, prominent citizens, and human activities, such as public events, hunting and fishing, and everyday life. Series 8, Willamette Valley Region - Oregon, 1890-1970, contains images of Philomath (Box 08), including a panorama of the city, views of the Benton County Lumber Company Planing Mill and a lumber flume, and a photograph of the Philomath Public School. Images from this collection have been digitized and are available in Oregon Digital.

E. E. Wilson Photographic Collection, circa 1855-1953
The E. E. Wilson Photographic Collection consists of images of Wilson, a Corvallis native and Oregon Agricultural College (OAC) alum, as well as his family and friends, the OAC campus, Corvallis, and other locations around the Pacific Northwest. The collection also includes images of the 1915 Panama Pacific Exposition in San Francisco and photos of Siletz tribe members. An image of the home of Sam Wyatt on North D Street in Philomath is included in the collection (image #0323, Box 01). Images from this collection have been digitized and are available in Oregon Digital.

Sydney Trask Photograph Collection, 1871-1932
This personal collection of photographs taken (and assembled) by Sydney Trask includes many notable images from the 1890s through 1910s of Oregon Agricultural College buildings, campus views, classrooms, and laboratories. Trask attended Oregon Agricultural College in 1894-1896. Before coming to Corvallis in 1894, he was a photographer for the railroad in eastern Oregon; in the late 1890s, he had a photographic studio in Corvallis. An image of the Philomath College building (image #083) is included in Box 01. Images from this collection have been digitized and are available in Oregon Digital.

Ralph VanCleave Photographic Collection, circa 1860-1949
The Ralph VanCleave Photographic Collection contains images of the Horning Carding Mill and F.A. Horning residence, and includes written histories of both subjects. Also held within the collection are images, taken in the 1940s, of public schools from all around the Willamette Valley. Images of Philomath College (image #03), and of Philomath-West School (image #16), are included in the collection (Box 01). Images from this collection have been digitized and are available in Oregon Digital.

Sanborn Fire Insurance Maps of Oregon, 1879-1956
The Sanborn Fire Insurance Maps of Oregon are an extensive collection of detailed maps of 178 towns and cities in Oregon prepared for the primary use of insurance companies. The bulk of the maps were prepared in the 1880s through 1920s. The maps depict both business and residential areas, including homes, apartments, and boarding houses; churches; schools, courthouses, community halls, parks, playgrounds, and other public facilities; warehouses, factories, mills, dryers, canneries, and creameries; retail stores, banks, and other businesses; and garages, barns, and sheds. They also provide detailed information about the construction materials used (e.g. brick, wood, stone), size of the structure and number of floors, and the heating source. The collection includes a fire insurance map for Philomath for 1925 (Box-Folder 15.2).

Street Surface Maps of Oregon Cities and Towns, 1939-1942
The Street Surface Maps of Oregon Cities and Towns depict street surface types, railroad locations, and building locations in 207 Oregon cities and towns. The maps are predominately at a 1 inch to 200 foot scale with a few surface maps ranging from 1 inch to 100 feet to 1 inch to 400 feet. There also are smaller-scaled key maps for cities with more than 4 surface maps. The maps differentiate between concrete roads, bituminous surfacing on rock, concrete, or treated bases, macadam surfacing, graded surfaces, or unimproved road surfaces. The maps also show the location of structures and the function of the building -- house barn, garage or shed; school, church, or post office; and business establishments of 1-3 stories. A map of Philomath (1939) is included in the collection (Box-Folder 10.1, Item 3).

Historic Oregon Topographic Maps, 1898-1993
The Historic Oregon Topographic Maps consist of superceded or obsolete topographic maps published by the U.S. Geological Survey. The maps cover all of Oregon as well as small portions of the bordering states of California, Idaho, and Washington. The bulk of the collection consists of 1:24,000 (7.5 min) quadrangle maps that were issued predominantly in the 1950s through 1970s and 1:62,500 (15 min) quadrangle maps which date from 1906 to the early 1970s. The maps depict topography; vegetation cover; rivers and lakes; roads, railroads, and other transportation; political boundaries; and the boundaries of national forests and parks. The central Willamette Valley topographic maps in the collection include a sheet for Philomath from 1913 (Box-Folder 5.1).

OSU Queer Archives Oral History Collection, 2015-2020
The OSU Queer Archives Oral History Collection is a growing repository of interviews and event recordings that document the experiences and perspectives of members of the LGBTQ+ community and its allies who have spent at least portions of their lives at Oregon State University and/or in Benton County, Oregon. The majority of the interview videos and event recordings are available online through the LGBTQ Voices portal. The interview video and index with Bryant Everett, who grew up in Philomath, are available online.

Horner Museum Oral History Collection, 1952-1993
The Horner Museum Oral History Collection consists of more than 250 oral history interviews conducted or assembled by the Horner Museum. The interviews address a variety of topics including the stories of Oregon State University faculty, students, and academic departments; the history of Corvallis and Benton County, Oregon; evolving economic and cultural perspectives on natural resources in rural Oregon; the life experiences of Native Americans and other ethnic minorities in the region; and the recollections of Americans born in the first few decades of the twentieth century. In his interview, Herschel Davis describes his family's move to, and his memories of Philomath. All of the audiocassettes held in this collection, including Herschel Davis', have been digitized and these files are available upon patron request.

Oregon Pioneers Oral History Collection, 1975-1978
The Oregon Pioneers Oral History Collection consists of 33 interviews conducted primarily in the summer of 1975 by Oregon State University students to document various aspects of local history from 1880 to 1929 in preparation for the United States bicentennial in 1976. Four interviews - with Alice Coolidge, Dan Hart, Melvin S. Hawkins, and Minnie McMurtry - discuss Philomath and its history. Nearly all of the audiocassettes held in this collection have been digitized and are available upon patron request; transcripts for each of the interviews are also available upon request (Box 02).