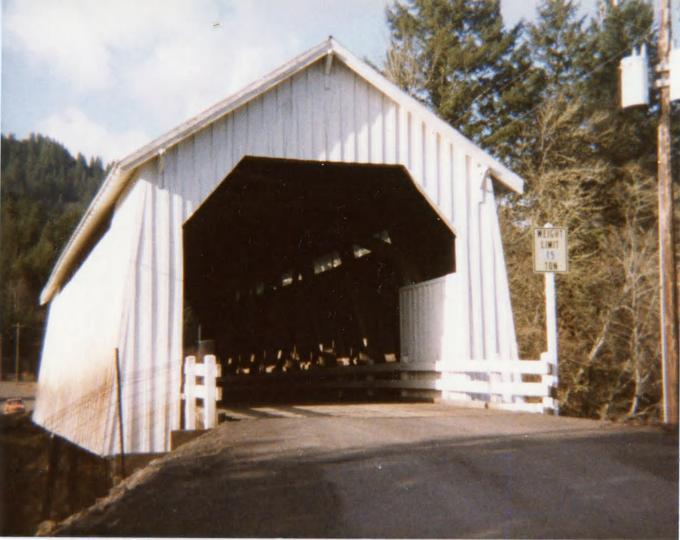 Deriving its name from the First Nations peoples who were the original residents of the area - the Alsi or Alseya - the community of Alsea, Oregon sits on the banks of the Alsea River on Highway 34, roughly twenty-six miles from Corvallis and forty miles from the coastal city of Waldport. The first formal reference to Alsea - at the time, the "Alseya Settlement" - was made on a General Land Office survey map in the mid-1850s; it is likely that the settlement was comprised of white farmers who had staked Donation Land claims in the area. Nearly two decades later, in 1871, a post office was established in the community.

Though Alsea experienced a boom thanks to improved highways and an increase in lumber production during World War II, environmental restrictions in the 1980s and 1990s resulted in a steady decline in population and local employment. Alsea and the surrounding area are now known primarily for their recreational opportunities, including steelhead fishing. As of the 2010 census, the population of Alsea was 164.

Roland Eugene Dimick Papers, 1901-1978
These papers were created and assembled by Roland Dimick and document the establishment of the Department of Fish, Game, and Fur Animal Management and Dimick's participation in the Oregon Wildlife Federation. Box 02 of the collection includes a photograph of Glock Webb, Alsea Fish Hatchery superintendent, circa 1953. Additionally, the research data in Accession 2014:104 document the fish "planting" of several Oregon lakes and rivers, and includes information collected from trout trapped on the Alsea River.

T.J. Starker Papers, circa 1890-1996
The T.J. Starker Papers consist of materials generated and collected by alumnus, forestry professor, and timber businessman Thurman James (T.J.) Starker. This collection documents Starker's forestry instruction and research at Oregon State College, management of a diverse range of property holdings, involvement in community and professional organizations, family life, student experience, work with the United States Forest Service, and writings on various subjects. Among the materials included in this collection are correspondence, lecture notes, meeting minutes, newspaper clippings, maps, photographs, research data, and scrapbooks. Materials documenting the Alsea Mountain timber cut in the 1950s and 1960s (Box-folder 01.01 and 08.01), and Alsea Mountain fire damage in the 1960s (Box-folder 08.24) are included in the collection.

Woody Holderman Photographs, 1956-1975
The Woody Holderman Photographs document the Oregon Game Commission's program of wood clearance from streams and rivers in Oregon's coastal basin forests. Holderman worked as a demolition specialist with the Oregon Game Commission (later the Department of Fish and Wildlife) from 1947 to 1978. The collection includes prints of the North Fork tributary of the Alsea River (Box 01, Page 11), and slides of Drift Creek (Box 01, Page 07). Images from this collection have been digitized and are available in Oregon Digital.

J.B. Horner Photograph Collection, circa 1846-1925
The J.B. Horner Photograph Collection consists of images assembled by Horner depicting historical figures and groups of people, such as members of the Siletz and Umatilla Indian tribes, as well as locations around Oregon. The collection also contains a number of images depicting early life on the Oregon State University campus and individuals associated with the university. John B. Horner taught English and history at Oregon Agricultural College from 1891 until his death in 1933. Two images of Louis Southworth, an African American resident of the Alsea Valley, are included in the collection (images #068 and #087, Box-folder 01.01). Also included in the collection is an image of Siletz tribal members Alsea Johnson and Susan Jack (image #024, Box 02). Images from this collection have been digitized and are available in Oregon Digital.

E. E. Wilson Photographic Collection, circa 1855-1953
The E. E. Wilson Photographic Collection consists of images of Wilson, a Corvallis native and Oregon Agricultural College (OAC) alum, as well as his family and friends, the OAC campus, Corvallis, and other locations around the Pacific Northwest. The collection also includes images of the 1915 Panama Pacific Exposition in San Francisco and photos of Siletz tribe members. Series 6, Outdoor Recreation and Nature Scenes, includes 10 nitrate negatives of the Alsea Fish Hatchery; one of these images - image #256 - has been digitized and is available in Oregon Digital. Additional images from this collection have been digitized and are available in Oregon Digital.

Ralph VanCleave Photographic Collection, circa 1860-1949
The Ralph VanCleave Photographic Collection contains images of the Horning Carding Mill and F.A. Horning residence, and includes written histories of both subjects. Also held within the collection are images, taken in the 1940s, of public schools from all around the Willamette Valley. One such image is of the Alsea School (image #06, Box 01). An image from this collection is available online in Oregon Digital.

Robert W. Henderson Photographic Slides Collection, 1936-1998
The Robert W. Henderson Photographic Slides provide visual documentation of Oregon State University and the state of Oregon from, in bulk, the mid-1950s to the late 1990s. Consisting of nearly 16,000 unique 35-mm color slides, all of which are described individually, the collection depicts a wide range of university activities, particularly as concerns agricultural research and the development of agricultural practices at OSU's county Extension offices and regional Experiment Stations. Robert Henderson (1914-2006) was an OSU alum and photography enthusiast who worked as a faculty member in Farm Crops and the Agricultural Experiment Station for thirty years. The collection includes several photographic and glass slides of the Alsea River, namely of the Alsea watershed and of fish traps on the Alsea River (images #00070, 00070a, 00070b, and 06959); two of the fishtrap images - images #00070a and 00070b - have been digitized and are available online in Oregon Digital. The Henderson Slides are being digitized for online access in Oregon Digital.

Donald B. Zobel Collection of Historic Forestry and Vegetation Maps, 1914-1989
The Donald B. Zobel Collection of Historic Forestry and Vegetations Maps consist of maps assembled and created by Zobel for his research in forest ecology and for teaching; the bulk of the maps depict forests in Oregon and northern California. Zobel was a faculty member in the Oregon State University Department of Botany and Plant Pathology from 1968 until 2003. Series 3, Oregon Forest Maps, includes two forest type maps of the Alsea-Rickreall region (Folder-Item 1.2 and Folder-Item 3.1); the forest type maps in Folder-item 1.2 are hand-colored and annotated.

Contract Administration Records, 1889-1976
The Contract Administration Records consist of expired contracts, leases, and agreements records; real property records including deeds and titles for land purchases, leases, and easement agreements; and construction and architectural service contracts for construction of buildings on the Oregon State University campus in Corvallis and other sites in Oregon. A file documenting "an agreement [between the Oregon State Game Commission and Oregon State Board of Higher Education] to conduct a fourteen year study on the effects of logging on the watershed and fish life in the Alsea basin" is included in Series 1, Contracts (Box-Folder 4.19).