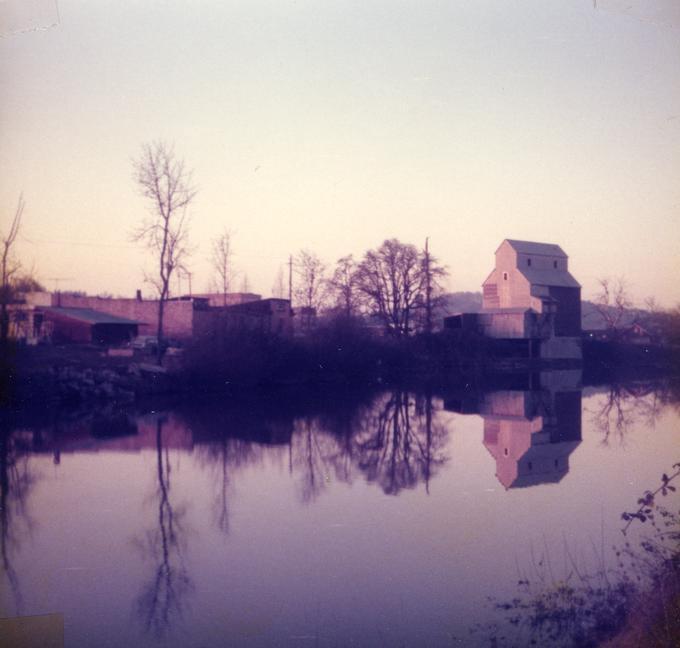 The community of Monroe straddles HWY 99W, roughly equidistant from Corvallis to the north and Eugene to the south. Monroe traces its origins to a small sawmill established by settler Joseph White in 1852. With the sawmill came workers and their families, and the services necessary to support them; by 1853, a settlement, known as White's Mill, had been established. Just north of White’s Mill, Rowland B. Hinton – who settled on a nearby donation land claim in 1846 – established the community of Starrs Point, named for local store owner, George Starr.

The communities of White’s Mill and Starrs Point would eventually merge, and the town of Monroe – named for U.S. President James Monroe – was platted on October 6, 1857 (Oregon Geographic Names, 1944). In 1859, the first high school in Monroe was built; the school charged a “reasonable” tuition, and students could pay extra for room and board. A post office was established in Monroe in the 1860s.

Monroe quickly became a “nexus for commercial river traffic…[transporting] lumber, grain, and produce north to towns along the Willamette River” (via the Long Tom River). At one point, Monroe was one of the most populous cities in the state, with “five gas stations, four grocers, three automobile dealers, a pool hall, a hotel, and several restaurants.” The city was incorporated in 1914.

Oregon State University Memorabilia Collection, circa 1860-present
The Memorabilia Collection is an artificial collection containing items of interest about Oregon State University and to a lesser extent, the city of Corvallis, and the state of Oregon. Several news clippings documenting the history of Monroe can be found in Box-Folder 107.21. Items from this collection have been digitized and are available in Oregon Digital.

Ina Rihani Photographs, 1977
The Ina Rihani Photographs consist of snapshots of Monroe, Oregon, taken or assembled by Rihani. Subjects featured in the photographs include: the old Monroe Flour Mill, Monroe High School, the Long Tom River, the Monroe Library, and the Monroe Pioneer Cemetery. Rihani enrolled at Oregon State University in the 1970s; she earned a B.A. in Sociology in 1975 and a M.A. in Interdisciplinary Studies in 1982. An image from this collection has been digitized and is available in Oregon Digital.

The Corvallis, Oregon, Photograph Collection consists of images of Corvallis and vicinity that document the city and region in the early and middle 20th century. A variety of formats are represented in the collection, including panoramic prints, nitrate negatives, hand-tinted prints, and large mounted mural-size prints. The photographs were assembled from a variety of sources. Images of a peach orchard, and of Oregon Apple Company Orchards manure boxes, near Monroe are included in the collection (Box 01, images #02, 04). Images from this collection have been digitized and are available in Oregon Digital.

The Robert W. Henderson Photographic Slides provide visual documentation of Oregon State University and the state of Oregon from, in bulk, the mid-1950s to the late 1990s. Consisting of nearly 16,000 unique 35-mm color slides, all of which are described individually, the collection depicts a wide range of university activities, particularly as concerns agricultural research and the development of agricultural practices at OSU's county Extension offices and regional Experiment Stations. Other strengths of the collection include faculty, staff and student life at OSU; Oregon's rural communities as viewed from the ground and the air; and imagery from Henderson's travels around the world. Documenting agricultural pursuits near Monroe, the collection includes images of a tree farm (Box 16, images #16973a-16973c), mint fields and farm (Box 16, images #17055-17056, 17173), and a corn field and farmstead (Box 16, images #17057a-17057b). The Henderson Slides are being digitized for online access in Oregon Digital.

The College of Agricultural Sciences Photographs were taken or assembled by College staff and faculty to document the Oregon State University's academic and research programs in agriculture; Branch Experiment Stations in Oregon; faculty, students, and alumni; international programs; and special events, conferences, and workshops. The bulk of the images are b/w prints and color slides; the collection also includes nitrate and glass negatives; some film negatives; and a few color prints. An image of cattle on the Long Tom Ranch in 1913 is included in the collection (Box-folder 1.1 , image #075). Images from this collection have been digitized and are available in Oregon Digital.

Several groupings of photographs were made by/for the Extension Service and the Agricultural Experiment Station, and depict the Emergency Farm Labor Service and Branch Experiment Station buildings and activities. Agricultural activities shown on campus include brooder houses, chicken coops, farm machinery classes, and the dairy barn. A small number of photos scattered throughout the collection were made by the USDA in Oregon around 1910. Photographers, when known, are indicated next to each image listed in the inventory. An image of Benton County Flax Growers Cooperative flax being harvested near Monroe is included as part of Series 2, Emergency Farm Labor Service Photographs (Box 01, images #131a-131f). Images from this collection have been digitized and are available in Oregon Digital.

The Gerald W. Williams Regional Albums consist of images and ephemera assembled by geographical regions. They were acquired and compiled Williams in the course of his work as a Forest Service sociologist and historian and due to his avocational interest in the history of forestry and the history of the United States, especially that of the Pacific Northwest region.  The albums document popular tourist destinations, national parks, the natural environment, prominent natural and architectural landmarks, forests and forest operations, mining, trains and railroads, early towns and cities, prominent citizens, and human activities, such as public events, hunting and fishing, and everyday life. Gerald Williams worked for the U.S. Forest Service from 1979 to 2005 as a sociologist (1979-1998) and historian (1998-2005). Series 8, Willamette Valley Region - Oregon, 1890-1970, includes images of Monroe (Box 08). Images from this collection have been digitized and are available in Oregon Digital.

Willibald Weniger Photographic Collection, 1870-1940
The Willibald Weniger Photographic Collection consists of a photograph album of images taken and/or collected by Willibald Weniger pertaining to the University of Wisconsin and Oregon Agricultural College and their vicinities between about 1904 and 1914. Also included are portraits of Weniger and a 19th century photograph album with images most likely of Weniger, his family and friends. Weniger was a professor of physics at Oregon Agricultural College from 1908 to 1914 and again from 1920 until his retirement in 1951. An image of what may be the railroad line to Monroe - with Marys Peak in the background - is included in the collection (Box 01, image #172). Images from this collection have been digitized and are available in Oregon Digital.

Sanborn Fire Insurance Maps of Oregon, 1879-1956
The Sanborn Fire Insurance Maps of Oregon are an extensive collection of detailed maps of 178 towns and cities in Oregon prepared for the primary use of insurance companies. The bulk of the maps were prepared in the 1880s through 1920s. The maps depict both business and residential areas, including homes, apartments, and boarding houses; churches; schools, courthouses, community halls, parks, playgrounds, and other public facilities; warehouses, factories, mills, dryers, canneries, and creameries; retail stores, banks, and other businesses; and garages, barns, and sheds. They also provide detailed information about the construction materials used (e.g. brick, wood, stone), size of the structure and number of floors, and the heating source. The collection includes fire insurance maps for Monroe for 1928 (Box-Folder 14.2).

Wetlands Inventory and Survey Maps, circa 1976-1990
The Wetlands Inventory and Survey Maps document the National Wetlands Inventory as conducted in the western United States and the central Willamette Valley and Pacific Coast in Oregon by the U.S. Fish and Wildlife Service, Office of Biological Services. The collection includes an atlas of state and local wetlands surveys that had been conducted in 1965-1975 as well as drafts of wetlands inventory maps documenting the type and extent of coastal and inland wetlands in Oregon. A draft wetland inventory map for Monroe is included in the collection (Folder-Item 2.10).

Street Surface Maps of Oregon Cities and Towns, 1939-1942
The Street Surface Maps of Oregon Cities and Towns depict street surface types, railroad locations, and building locations in 207 Oregon cities and towns. The maps are predominately at a 1 inch to 200 foot scale with a few surface maps ranging from 1 inch to 100 feet to 1 inch to 400 feet. There also are smaller-scaled key maps for cities with more than 4 surface maps. The maps differentiate between concrete roads, bituminous surfacing on rock, concrete, or treated bases, macadam surfacing, graded surfaces, or unimproved road surfaces. The maps also show the location of structures and the function of the building -- house barn, garage or shed; school, church, or post office; and business establishments of 1-3 stories. A map of Monroe (1939) is included in the collection (Box-Folder 8.1, Item 14).

Historic Oregon Topographic Maps, 1898-1993
The Historic Oregon Topographic Maps consist of superceded or obsolete topographic maps published by the U.S. Geological Survey. The maps cover all of Oregon as well as small portions of the bordering states of California, Idaho, and Washington. The bulk of the collection consists of 1:24,000 (7.5 min) quadrangle maps that were issued predominantly in the 1950s through 1970s and 1:62,500 (15 min) quadrangle maps which date from 1906 to the early 1970s. The maps depict topography; vegetation cover; rivers and lakes; roads, railroads, and other transportation; political boundaries; and the boundaries of national forests and parks. A 15-minute quadrangle map of Monroe, at a scale of 1:62,500, is included in the collection (Box-Folder 3.1).