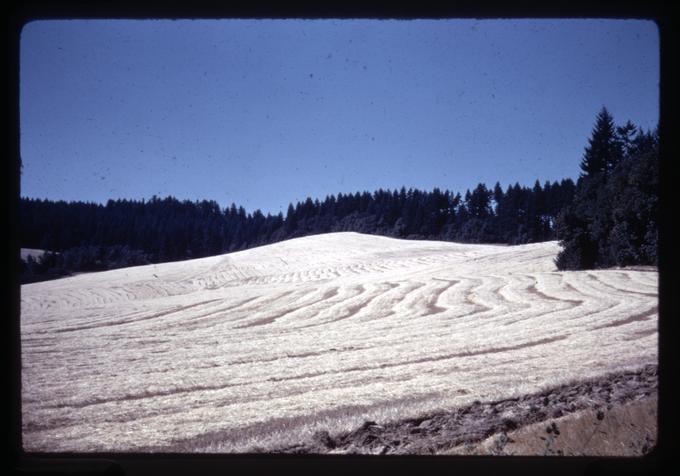 Dawson, Oregon is a census-designated community northwest of Alpine and six miles west of Highway 99 on Dawson Road. The community lies along Miller Creek, and the community center is near the junction of Miller and Oliver Creeks, which likely helped facilitate the building and operation of the Hull-Oakes Lumber Company in Dawson.

The Portland, Eugene and Eastern (PE&E) Railway company's Corvallis and Alsea River Railway line was "built south from 6th and B Streets [in Corvallis] in 1908. It bridged the Marys River and went south as far as Monroe, Alpine, and Glenbrook." This line included a spur, built sometime before 1915, with larger stations in Monroe and Alpine, and additional, smaller stations at Avery, Dry Creek, Burnett, Glenbrook, and Greenberry; the line terminated at Dawson. In 1911, the Corvallis and Alsea River Railway line was purchased by Alvadore Welch; Welch subsequently renamed it the Portland, Eugene and Eastern Railroad. PE&E was purchased by the Southern Pacific Railroad Company (SP) around 1913. The line provided significant outlet for the region's timber products; lumber processed at the Hull-Oakes Lumber Company in Dawson, for example, was shipped by rail on this line.

In the 1990s, the Portland & Western (originally the Willamette & Pacific) leased the tracks from the Southern Pacific; locomotives visited the Hull-Oakes Lumber Company twice weekly as late as 1998. The line continued to operate until 2007, when the significant repairs required could no longer justify the by-then-minimal traffic on the line. Several efforts to restore the line, either for commercial or recreation use, surfaced in 2011 and 2014 respectively, but as of 2020 the line remains unused.

Robert W. Henderson Photographic Slides Collection, 1936-1998
The Robert W. Henderson Photographic Slides provide visual documentation of Oregon State University and the state of Oregon from, in bulk, the mid-1950s to the late 1990s. Consisting of nearly 16,000 unique 35-mm color slides, all of which are described individually, the collection depicts a wide range of university activities, particularly as concerns agricultural research and the development of agricultural practices at OSU's county Extension offices and regional Experiment Stations. Robert Henderson (1914-2006) was an OSU alum and photography enthusiast who worked as a faculty member in Farm Crops and the Agricultural Experiment Station for thirty years. The collection contains 1 image of a "stubble field and timber near Dawson" (image #02777; Box 04). The Henderson Slides are being digitized for online access in Oregon Digital.