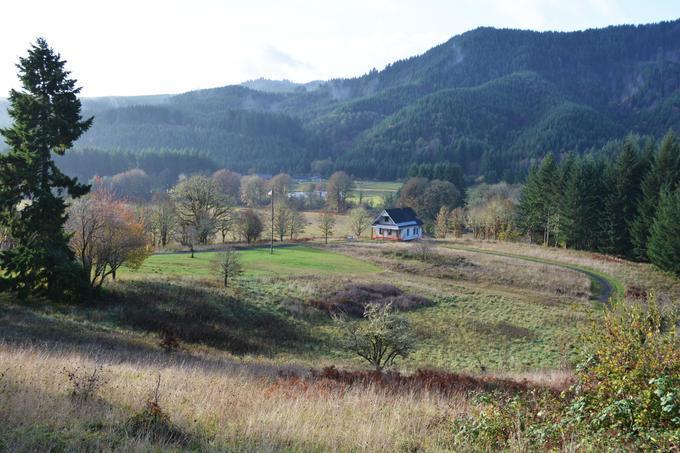 Built in 1856, and named for North Carolina native Charles Hoskins, Fort Hoskins was “one of three ‘forts’ built by the U.S. Army to monitor the Coastal Indian Reservation in Oregon in the mid-19th century.” Overlooking the flood plain of the Luckiamute River and roughly 19 miles northwest of Corvallis, at its completion in 1857 the fort was placed under the command of then-lieutenant Philip Sheridan. Though the fort was abandoned in 1865, the community of Hoskins took its name from the fort.

In 1891, a post office was established in Hoskins, with Jonathan N. Hoffman as the first postmaster. The Valley & Siletz Railroad, which had been incorporated by the Cobbs and Mitchell Lumber Company in 1912 and completed in 1914, headquartered in Hoskins and the rail company stationed several of its steam – and eventually diesel – engines and “self-powered” passenger cars there. Though primarily used for transporting lumber between Valsetz, Oregon in Polk County, and Independence, Oregon, agricultural products were also transported alongside this line. The first covered bridge over the Luckiamute River at Hoskins was constructed in 1900; in 1938, the first bridge was replaced. The bridge, unfortunately, was damaged beyond repair in a windstorm – originally referred to as Hurricane Freda – that raged through the Pacific Northwest and Canada in October 1962.

Hoskins saw its fortunes fade with the timber industry. The post office closed in December 1958 (mail was diverted to Philomath until 1965), and the “railroad was sold to Boise Cascade who discontinued and removed the section containing Hoskins in early 1979.” Hoskins’ bar, the Fort Tavern, closed its doors for good in 2000.

Oregon State University Memorabilia Collection, ca. 1860-present
The Memorabilia Collection is an artificial collection containing items of interest about Oregon State University and to a lesser extent, the city of Corvallis, and the state of Oregon. A subject folder for Fort Hoskins, containing newspaper clippings, History of paper, promotional brochures, fliers for events is housed in Box-Folder 74.3. Items from this collection have been digitized and are available in Oregon Digital.

Harriet's Photograph Collection, circa 1868-1980
Harriet's Photograph Collection--named for the first University Archivist, Harriet Moore--is an artificial collection of photographic images documenting a range of Oregon State University programs, activities, and personnel from the institution's founding as Corvallis College in 1868. The collection consists of about 25 cubic feet of photographic prints and negatives (approximately 30,000 items) dating from the late 19th century through the 20th century. An image of the Fort Hoskins Band, image HC1510, can be found in Box 04. Images from this collection have been digitized and are available in Oregon Digital.

Gerald W. Williams Postcards Collection, 1893-1959
The Gerald W. Williams Postcards Collection consists of postcards acquired and assembled by Williams in the course of his work as a Forest Service sociologist and historian and due to his avocational interest in the regional history of the Pacific Northwest. The bulk of the collection consists of scenic views and natural landmarks in Oregon, Washington, and California.  Forestry, logging, fishing, and other rural activities are predominant topics in the collection. Gerald Williams worked for the U.S. Forest Service from 1979 to 2005 as a sociologist (1979-1998) and historian (1998-2005). A photographic reproduction of a painting or drawing of Fort Hoskins - done by by Ball Studio - is housed in Box-Item 1.075. Items from the collection are available online in the Gerald W. Williams Collection.

Oregon Pioneers Oral History Collection, 1975-1978
The Oregon Pioneers Oral History Collection consists of 33 interviews conducted primarily in the summer of 1975 by Oregon State University students to document various aspects of local history from 1880 to 1929 in preparation for the United States bicentennial in 1976. Bertha A. King, descendant of Nahum King after whom Kings Valley is named, discusses Fort Hoskins in her oral history (Box-Folder 2.31). Nearly all of the audiocassettes held in this collection have been digitized and are available upon patron request.