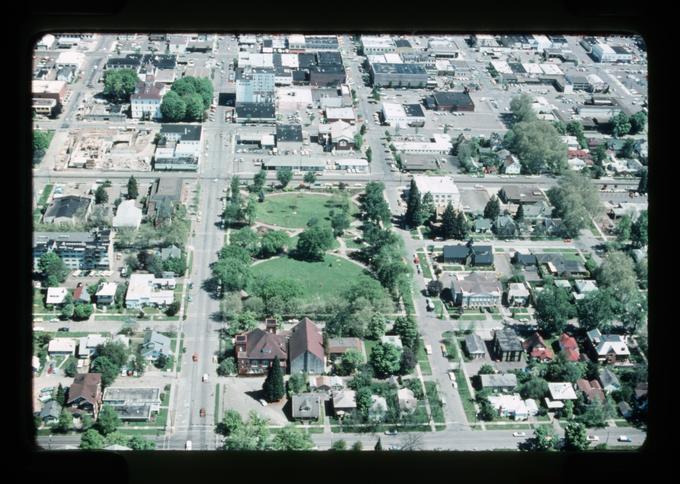 Topographic maps, aerials, and Sanborn maps can help researchers make arguments about urban development patterns, and answer questions such as: why was one part of a city developed before another? How did improvements in infrastructure affect the growth of a town or city? Did specific geographic / topographic features prevent growth in a specific area, and/or encourage it in others? When combined with additional data sets, such as census data, historic maps can be used to illustrate the “process of urbanization as represented by annexations, mergers, and upgrading of administrative areas from village to town, city, or city ward; population changes mapped by administrative area; [and] development of a region's extensive rail network.”

In most cases, maps will need to be combined with other resources to answer these questions, but are nevertheless a vital component in surfacing a more holistic historical picture.

Sanborn Fire Insurance Maps of Oregon, 1879-1956
The Sanborn Fire Insurance Maps of Oregon are an extensive collection of detailed maps of 178 towns and cities in Oregon prepared for the primary use of insurance companies. The bulk of the maps were prepared in the 1880s through 1920s. The maps depict both business and residential areas and provide detailed information about the location and type of construction of structures. Most of the maps are at a scale of 1 inch = 50 feet. The collection includes maps of Portland, Astoria, Bend, Corvallis, Eugene, Medford, and Salem as well as numerous smaller towns and villages. All types of structures are represented, including homes, apartments, and boarding houses; churches; schools, courthouses, community halls, parks, playgrounds, and other public facilities; warehouses, factories, mills, dryers, canneries, and creameries; retail stores, banks, and other businesses; and garages, barns, and sheds. The maps provide detailed information about lumber and saw mills and log ponds. Information about streets and railroads as well as the water system and fire department for each municipality are provided on the maps. The Sanborn Maps indicate the type of construction of each structure, whether it is wood, brick, stone, or a combination; the size of the structure and number of floors; and the heating source.

The Library of Congress has made a selection of their Sanborn maps available online.

Aerial Photographs of Benton, Lincoln, Linn, Marion and Polk Counties, 1936-1979
This collection is comprised of aerial photographs taken by or under contract with the United States Department of Agriculture from 1936 to 1979 and includes images of 5 counties in western Oregon: Benton, Lincoln, Linn, Marion, and Polk. This collection includes multiple sets of photographs (arranged chronologically by year) for each county. Each set is comprised of two components: photo mosaics (Series 1) and photo tiles (Series 2-6). The mosaics, which serve as indices for the photo tiles, are representations of each county (typically one quadrant of the county per sheet) made by arranging reproductions of the photo tiles in geographic order. The mosaics include serial numbers for each tile and are annotated to indicate which tiles are held in the collection. The photo tiles are largescale photographs of quadrangles within each county. Because the photo tile sets are incomplete, each mosaic includes annotations indicating which photo tiles are present in the collection. Many of the collection's mosaics and photographic tiles include manuscript annotations, markings highlighting geographic features, and alternative numbering schema. This collection is being digitized, and is available online in Oregon Digital.

The United States Department of Agriculture Aerial Photographs of Linn, Benton, and Lincoln Counties, Oregon, consist of aerial photographs assembled and used by the USDA field office in Tangent, Oregon for soil conservation and other purposes. The photographs were made by the National Aerial Photography Program. For 1994, the collection includes detailed index maps and large (24x24 inch prints) as well as smaller (10x10 inch) photo proofs. Index maps are also available for the 1990 and 1985 photographs. The 1985 images only include Lincoln County. For all other years, there are no indexes available and all of the images are 9x9 inch or 10x10 inch photo proofs. However, a small subset of the 1972 images have descriptions of the locations depicted in the photographs and the collection includes one 24x24 inch print of the 1972 flights. The 1994 images include a few images of neighboring Lane, Marion, and Polk Counties near the boundaries with Benton, Lincoln, and Linn Counties.

Marys Peak Area Aerial Photographs, 1962
The Marys Peak Area Aerial Photographs consist of photographic prints (9x9 and 10x10 inches) made by the U.S. Forest Service in June-September 1962. The photographs are part of the Forest Service's Project EIJ (FS-EIJ) and depict Marys Peak and other areas in the Oregon Coast Range that are part of the Siuslaw National Forest. Many of the images include logging roads and clearcuts. The collection also includes an index map for the images of Marys Peak; some of the images are annotated with township and range.

Siuslaw National Forest Aerial Photographs, 1972-1974
The Siuslaw National Forest Aerial Photographs consist of photographic prints (9x9 inches) made by the U.S. Forest Service in the summers of 1972 and 1974. The photographs depict the southern half of the Siuslaw National Forest lands from Waldport to Coos Bay and from the Oregon coast to the east slope of the Coast Range. The images include forests, clearcuts and logged areas, and logging roads as well as rivers and streams through the Oregon Coast Range and the Oregon Dunes near Florence and Reedsport. The bulk of the collection (976 prints) consists of photographs made in August 1972. These images are arranged by flight line (28 lines total), and are at a scale of 1:15,840. The remainder of the collection (143 prints) consists of photographs made on flight 41041 in July 1974. These are at a scale of 1:70,000. Many of the 1974 prints are heavily annotated.

Camp Adair, Oregon, Maps and Aerial Photographs, 1942-1973
The Camp Adair, Oregon, Maps and Aerial Photographs collection includes topographic maps, orthophotographs, and other maps and images documenting Camp Adair, which was located north of Corvallis, Oregon. Most of the materials in the collection were prepared by the U.S. Army Corps of Engineers and the bulk are from the war years of 1942-1944. The maps offer details on buildings in the cantonment area; artillery ranges; training courses; roads, ditches and culverts; and general land features. Several items from Folder 1 have been digitized and are available upon request.