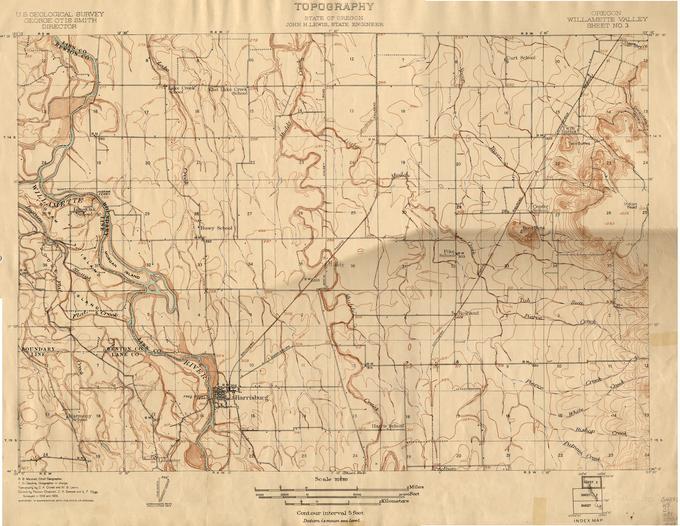 A topographic map, or “topographic sheet,” is a type of map which uses contour lines – a line on a map which joins points of equal elevation – to represent both natural (e.g. hills, mountains, valley, forest cover, bodies of water) and artificial (e.g. power lines, railways) features of the Earth’s surface.

In 1954, a wall painting dating to approximately 6,500 BC was excavated at Çatalhüyük, a Neolithic and Chalcolithic settlement in what is now south-central Turkey. At over four meters wide, the rectangular shapes included on the map have been interpreted as “a town rising in graded terraces closely packed with rectangular houses.” The inclusion of the twin mountain peaks of Hasan Dağ is considered a topographical element of the map.

Topographical maps are based on topographical surveys. In 1789, French astronomer Jean-Dominique Cassini completed a topographical survey of France that had spanned over three decades: the Carte géométrique de la France (Geometric Map of France). Begun by his father, César-François Cassini de Thury, in 1756, the purpose of the map was to “measure distances by triangulation, ensuring the exact positioning of locations; measure the kingdom, determining the number of boroughs, cities and villages; and depict unchanging landscape features.”

Early Topographical Maps of the Oregon Coast, 1868-1915
The Early Topographical Maps of the Oregon Coast document topographical surveys conducted on the central Oregon coast from Cape Foulweather to the Umpqua River in 1868 and 1887 with updates added through the 1910s.. The maps were produced by the U.S. Coast and Geodetic Survey under the supervision of several assistants, A.W. Chase, E.F. Dickins, and Cleveland Rockwell. The 1868 map of Cape Foulweather and the Entrance to Yaquina Bay is at a scale of 1:10,000; the remainder of the maps are at 1:40,000 scale. The maps are high-quality reproductions and depict elevations, key azimuths, English and Native American names for land features, main trails and roads, common water travel routes, lighthouses, and some information on land use.

Historic Oregon Topographic Maps, 1898-1993
The Historic Oregon Topographic Maps consist of superceded or obsolete topographic maps published by the U.S. Geological Survey. The maps cover all of Oregon as well as small portions of the bordering states of California, Idaho, and Washington. The bulk of the collection consists of 1:24,000 (7.5 min) quadrangle maps that were issued predominantly in the 1950s through 1970s and 1:62,500 (15 min) quadrangle maps which date from 1906 to the early 1970s. The maps depict topography; vegetation cover; rivers and lakes; roads, railroads, and other transportation; political boundaries; and the boundaries of national forests and parks. Of special note are topographic maps of the Willamette Valley and vicinity that were prepared in the 1900s-1910s; these depict the southern and central Willamette Valley from Springfield and Eugene to Albany. They are available online in the Oregon Maps Digital Collection.

The earliest maps in the collection are 1:125,000 (30 min) sheets published as early as 1898. The 1:125,000 maps include multiple editions for most sheets that depict changes and developments in Oregon locales from the 1900s through 1940s. The U.S. Geological Survey provides online access to these maps through The National Map: Historical Topographic Map Collection.

Lehi F. Hintze Geological Reconnaissance Maps of Oregon, 1936-1958
The Lehi F. Hintze Geological Reconnaissance Maps of Oregon consist of geologic maps prepared and assembled by Hintze for much of the state of Oregon. Most of the maps are compilations of published geologic mapping, unpublished geologic mapping done by graduate students at Oregon State College and the University of Oregon, and mapping by Hintze. The maps in Series III are published geologic maps, many of which have been annotated by Hintze. The maps reflect geologic mapping done from the mid-1930s through the 1950s. Most of the maps are hand-colored and have copious annotations indicating the sources of the information or noting questions or corrections. Some of the maps include cross sections. The maps vary in scale from 1:24,000 to 1:400,000; most of the maps are 1:62,500 or 1:125,000 scale. Topographic maps are included throughout the collection, but primarily concentrated in Series 2, 4, 5, 6, and 7 (Box-folders 1.2 - 1.4, and Folder 2, respectively).

Native American Maps Collection, 1875-1972
The Native American Maps Collection consists of maps of the Warm Springs Indian Reservation in north central Oregon; an 1875 map of native tribes in Alaska; and United States maps depicting the locations of Indian reservations. The Warm Springs maps include maps of the road system, historical maps of the Reservation and region; and detailed range survey type maps prepared in 1938-1939 and 1956. The Alaskan map depicts with color the approximate areas over which native tribes in Alaska ranged as of the late 19th century. A topographic map of the Warm Springs Indian Reservation - drawn and compiled by E.H. Coulson, published by the U.S. Office of Indian Affairs, 1929 - is included in the collection (Folder-item 1.1). A note on the map indicates the topographic and cultural data was obtained from field notes of a timber cruise and land classification conducted in 1922-1924 and 1926 under the direction of F.M. Wilkes.

Camp Adair, Oregon, Maps and Aerial Photographs, 1942-1973
The Camp Adair, Oregon, Maps and Aerial Photographs collection includes topographic maps, orthophotographs, and other maps and images documenting Camp Adair, which was located north of Corvallis, Oregon. Most of the materials in the collection were prepared by the U.S. Army Corps of Engineers and the bulk are from the war years of 1942-1944. The maps offer details on buildings in the cantonment area; artillery ranges; training courses; roads, ditches and culverts; and general land features. Folder-Item 1.4, a map featuring topographic contour lines as well as Camp Adair boundaries, cantonment area, and roads, has been digitized and is available upon request.

William H. Galvani Rare Maps Collection, circa 1570-1909
The William H. Galvani Rare Maps Collection is comprised of maps and atlas pages from the 16th to 20th centuries depicting various cities, countries and continents. There are a significant number of maps related to the French Revolution, Napoleonic Wars, United States Civil War, Crimean War and the Russo-Japanese War.  The collection also contains late 19th century topographical surveys of the Adirondacks, early 20th century military surveys of Cuba, and maps detailing the voyages of Captain James Cook. Box-folder 7.3 includes general topographic maps for Texas (1861-1865) and the "Indian Territory and Arkansas" (1861-1860), both taken from Atlas to Accompany the Official Records of the Union and Confederate Armies 1861-1865. Box-folder 8.1 includes a topographical map of a U.S. Army Post Site Near Indianapolis, Indiana (1903).

Wetlands Inventory and Survey Maps, circa 1976 - 1990
The Wetlands Inventory and Survey Maps document the National Wetlands Inventory as conducted in the western United States and the central Willamette Valley and Pacific Coast in Oregon. The collection includes two atlases. One atlas depicts the extent of state and local wetlands surveys that had been conducted in 1965-1975. The second atlas shows the types and coverage of aerial photography available for conducting wetlands surveys and inventories. Drafts of wetlands inventory maps for the area from the central Willamette Valley to the coast comprise about half of the collection. These maps document the type and extent of coastal and inland wetlands following the Cowardin Classification System developed by the U.S. Fish and Wildlife Service in 1979. The Cowardin system is a hierarchical classification consisting of the major wetlands classes of marine, estuarine, riverine, lacustrine, and palustrine. Details on water flow, substrate, vegetation, flooding, and salinity define subclassifications within the major classes. The maps were prepared primarily by stereoscopic analysis of high-altitude aerial photographs; wetlands were identified based on vegetation, visible hydrology, and geography. Most of the maps in Series 2, National Wetlands Inventory Maps, are 1:24,000 U.S. Geological Survey topographic quadrangles (Folder 2).

The State of Oregon Maps Collection includes a diverse selection of maps of Oregon. The collection includes single-sheet maps of the full state of Oregon and detailed maps of specific areas. Maps of counties, cities, and regions of the state are included. Topics of the maps include geology, soils, agriculture, recreation, traffic flow, dams and reservoirs, land use, and physiography. Most of the maps depict roads, city and town locations, and political boundaries. City and county maps include street names, buildings, and historical sites. All regions of the state are represented in the collection, including all counties and many cities and towns. Maps of Corvallis and Benton County are in a separate collection. One map in this collection - the 1876 General Land Office map of Oregon - is available in the Oregon Maps digital collection. Series 7, Sub-series 9 is comprised entirely of topographic maps (Folder 22).

Oregon State University Campus Maps, 1894-1994
The Oregon State University Campus Maps document the development of the Oregon State campus from the 1890s through the 1990s. The collection includes campus guides, visitor and parking maps, and pictorial maps. Maps documenting campus planning in the 1920s through 1970s are part of the collection. Information about the ownership of lands purchased or acquired by the University is available. Detailed survey maps and plans for sewers and utilities, roads, and walkways prepared during the 1900s-1920s are part of the collection. Many of the campus guides include descriptive information about the campus and Corvallis. Maps showing the locations of fraternities and sororities are also available in the collection. Several of the maps in Series 1, Oregon Agricultural College Maps, depict the topography of the campus, especially in the vicinity of Community Hall [Benton Hall]; most of these were made by students in surveying classes (Folders 1 and 6, and Box-folder 5.1).

Rangeland Resources Department Maps, 1936-1967
The Rangeland Resources Department Maps consist of materials created and assembled by Rangeland Resources faculty and alumni documenting range type surveys and studies in the Lower Powder River basin, Vale District, and Squaw Butte Experimental Range in eastern Oregon. The collection includes detailed range type maps of the Keating Soil Conservation District on the Lower Powder River in Baker County; these maps also include a land ownership overlay and tabulated acreages of different range types, cultivated land, and pasture as well as grazing capacity. These were prepared by E. William (Bill) Anderson of the Soil Conservation Service. One map of range types in the Vale District in eastern Oregon is also part of the collection. Materials created for range studies conducted in the 1930s and 1960s of the Squaw Butte Experiment Range in southeastern Oregon comprise a portion of the collection. Folder 4 includes topographic maps of Squaw Butte Ranch prepared by the U.S. Geological survey (circa 1960).

The Maps of Washington (State) and the Pacific Northwest consist of historic and superseded maps depicting forest resources, geology, public lands and land use, hydroelectric projects, highways, and railroads in Washington and the Pacific Northwest region. Most of the maps in the collection are of all or part of the State of Washington. Regional maps depict Oregon, Washington, Idaho, Montana, and, in some cases, California and Wyoming. The maps were created by various U.S. government agencies, State of Washington departments, and private organizations. The collection includes maps created over a 150-year period from the mid-19th century through the 1990s, with the bulk of the maps documenting the early 20th century. Hand-drawn manuscript maps created by early explorers and surveyors as well as maps created from satellite imagery are part of the collection. Regional maps as well as detailed, local maps are available. Series 5 is comprised entirely of superseded or obsolete topographic maps published by the U.S. Geological Survey for various locations in Washington (Box-folder 2.2); Series 7, Pacific Northwest Maps, includes a topographic map of the Cascade Range (Folder-item 6.20), and of Mount Baker (Folder-item 6.23).