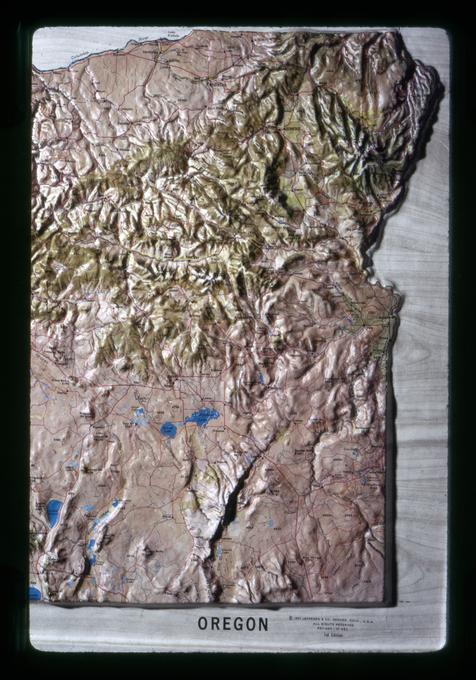 Similar to topographic maps, relief maps “depict contours of landmarks and terrain, based on shape and height.” Relief maps, however, are more advanced versions of topographic maps, emphasizing the three-dimensional elevation of topography and often exaggerating elevation for visual effect. Relief maps – similar to those you might see at a Forest Service visitor center – can be made out of vacu-formed plastic and shaped to represent in three dimensions the variations in elevation. Shading is also used between lines of contour to better differentiate elevation heights.

It should be noted that none of the relief maps in SCARC’s collections are raised-relief maps, which are three-dimensional.

State of Oregon Maps Collection, 1866-2000
The State of Oregon Maps Collection includes a diverse selection of maps of Oregon. The collection includes single-sheet maps of the full state of Oregon and detailed maps of specific areas. Maps of counties, cities, and regions of the state are included. Topics of the maps include geology, soils, agriculture, recreation, traffic flow, dams and reservoirs, land use, and physiography. Most of the maps depict roads, city and town locations, and political boundaries. City and county maps include street names, buildings, and historical sites. All regions of the state are represented in the collection, including all counties and many cities and towns. Maps of Corvallis and Benton County are in a separate collection. Relief maps can be found in Folders 2 and 27. One map in this collection - the 1876 General Land Office map of Oregon - is available in the Oregon Maps digital collection.

Historic Oregon Topographic Maps, 1898-1993
The Historic Oregon Topographic Maps consist of superseded or obsolete topographic maps published by the U.S. Geological Survey. The maps cover all of Oregon as well as small portions of the bordering states of California, Idaho, and Washington. The bulk of the collection consists of 1:24,000 (7.5 min) quadrangle maps that were issued predominantly in the 1950s through 1970s and 1:62,500 (15 min) quadrangle maps which date from 1906 to the early 1970s. The maps depict topography; vegetation cover; rivers and lakes; roads, railroads, and other transportation; political boundaries; and the boundaries of national forests and parks. The earliest maps in the collection are 1:125,000 (30 min) sheets published as early as 1898. The 1:125,000 maps include multiple editions for most sheets that depict changes and developments in Oregon locales from the 1900s through 1940s; the U.S. Geological Survey provides online access to these maps through The National Map: Historical Topographic Map Collection. Of special note are topographic maps of the Willamette Valley and vicinity that were prepared in the 1900s-1910s; these depict the southern and central Willamette Valley from Springfield and Eugene to Albany. They are available online in the Oregon Maps Digital Collection. Maps in Series 4 included shaded relief (Folders 13 - 15).

Maps of Washington (State) and the Pacific Northwest, 1863-1994
The Maps of Washington (State) and the Pacific Northwest consist of historic and superseded maps depicting forest resources, geology, public lands and land use, hydroelectric projects, highways, and railroads in Washington and the Pacific Northwest region. Most of the maps in the collection are of all or part of the State of Washington. Regional maps depict Oregon, Washington, Idaho, Montana, and, in some cases, California and Wyoming. The maps were created by various U.S. government agencies, State of Washington departments, and private organizations. The collection includes maps created over a 150-year period from the mid-19th century through the 1990s, with the bulk of the maps documenting the early 20th century. Hand-drawn manuscript maps created by early explorers and surveyors as well as maps created from satellite imagery are part of the collection. Regional maps as well as detailed, local maps are available. Relief maps are included in Folders 1 and 6.