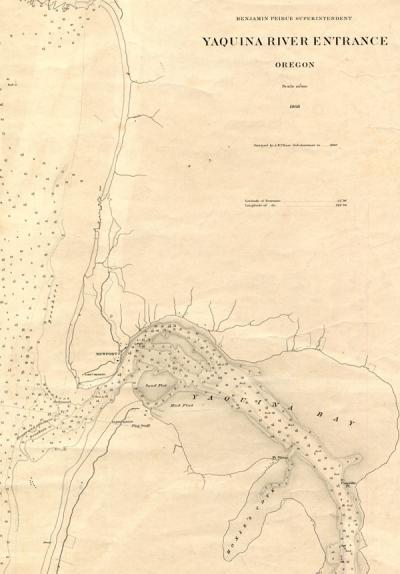 Nautical maps or charts are “graphic representations of a sea area and adjacent coastal regions,” and may show the “depth of the water, natural features of the seabed, details of the coastline, navigational hazards, locations of natural and human-made aids to navigation, information on tides and currents…and human-made structures such as harbors, buildings, and bridges.”

Early sailors were guided by their own past experience, and the experiences and advice of other sailors; these “sailing instructions” provided information on the “peculiarities of coastal waters, fairway conditions, approaches, port entrances with reefs, [and] shallows and sandbanks or landmarks important for orientation.” These oral directions were sometimes accompanied by sketches for reference, but nothing like the sailing charts and maps of today.

Portolan maps, the first “modern” nautical maps, were first mentioned around 1270, and primarily documented the Mediterranean Sea and Southern Europe.

Historic Oregon Nautical Charts, 1868-2009
The Historic Oregon Nautical Charts consist of superseded navigational maps for the Pacific Coast from California to Washington, navigable rivers and bays on the Oregon Coast, and the Columbia and Willamette Rivers. The collection includes charts for Coos, Tillamook, and Yaquina Bays and the Coquille, Nehalem, Siuslaw, Umpqua, and Yaquina Rivers. The charts vary in scale from 1:10,000 to 1:1,000,000, with the maps of the Oregon coastal rivers and bays and the Columbia and Willamette Rivers providing the most detail. In addition to depth soundings of the open ocean, the charts depict lights, buoys, and radio beacons along the coast; topography of lands near the coast or waterways; and jetties, rock formations, and reefs. The charts include some roads and other features along the coastline.

Reconnaissance of the Western Coast of the United States Nautical Charts, 1853-1864
The Reconnaissance of the Western Coast of the United States Nautical Charts consist of three sheets depicting the Pacific coastline from San Diego to the Canadian border. These engraved nautical charts have relief shown by hachures and soundings in fathoms. The sheets include views and profiles of headlands and other points of interest on the coast as well as general sailing directions and information about tides. The scale for all the sheets is 1:1,200,000. The southern sheet, "San Francisco to San Diego", was produced in 1853. The middle sheet, "San Franciso to Umpquah River" (in Oregon) was produced in 1854 and "corrected to" 1864. The northern sheet, "Umpquah River to the Boundary", was produced in 1855 and also "corrected to" 1864. The maps are affixed to linen backing. Profile views of Cape Gregory, Cape Blanco, Cape Perpetua, Cape Lookout, and Tillamook Head in Oregon are included.