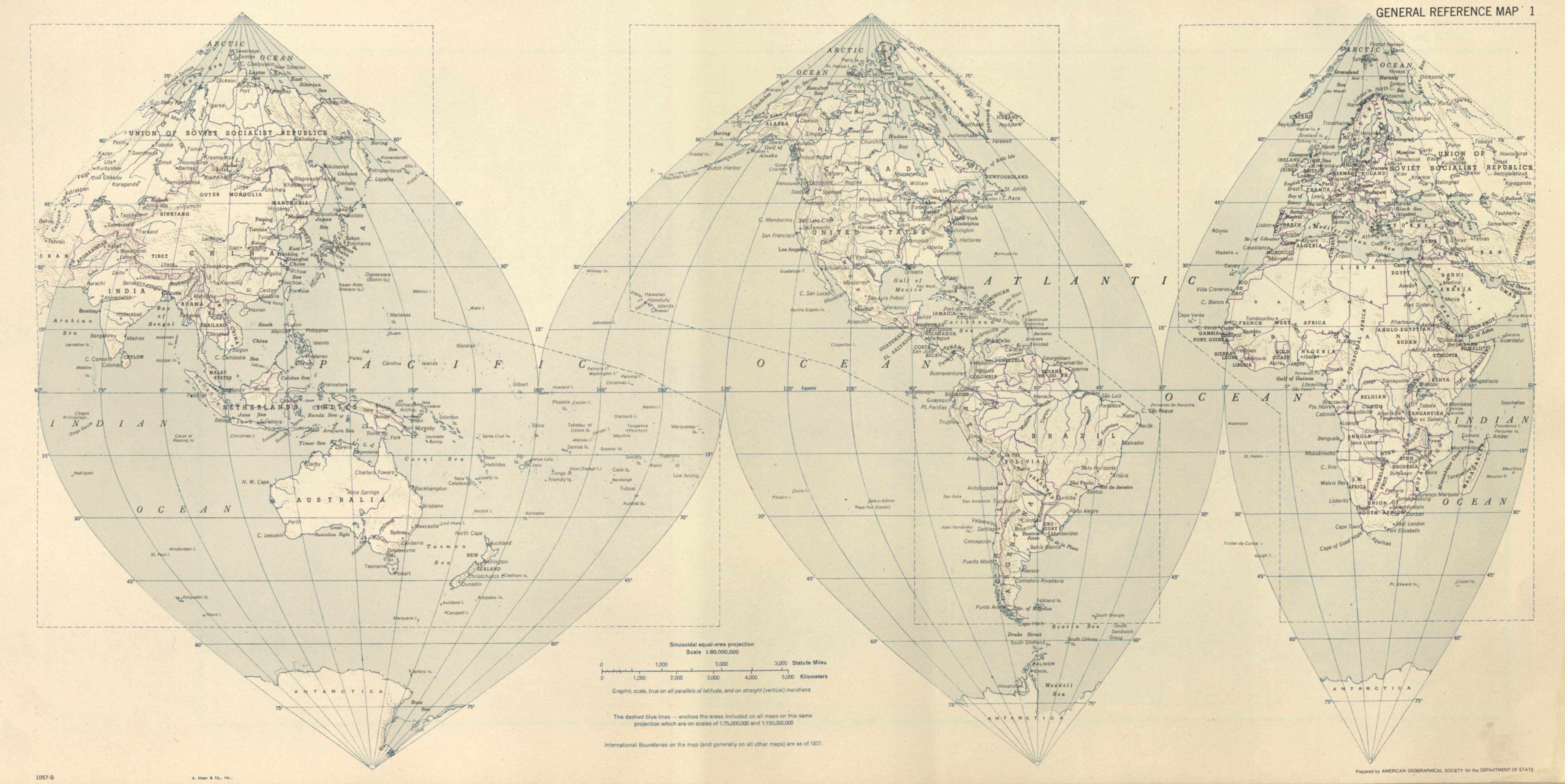 A world map is a representation of most, if not all, of the Earth’s surface. As they attempt to represent a spherical, three-dimensional surface in two dimensions, world maps – like all maps – must find ways to mitigate the distortion that occurs from “flattening” a three-dimension shape into two dimensions.

Some of the oldest known world maps date to the 6th to 5th centuries BC (e.g. the Imago Mundi) and are based on the “flat earth paradigm.” In 150, Ptolemy – a geographer, among many other things – published Geography. This work includes a "world" map – credited by Ptolemy to Agathodaemon of Alexandria – which was considered definitive well into the Middle Ages. It is notable due to its use of longitudinal and latitudinal lines, and identifies the continents of Europe, Asia, and Libya (Africa) and their countries. World maps based on the idea of a spherical Earth began to appear in the 4th century.

Charting a global world map, however, requires the technology to explore, such as hardy sailing vessels designed for long voyages, and reliable compasses and other instruments of navigation. The swell of exploration that began during the European Renaissance, made possible what had previously been impossible; by the mid-1700s, “knowledge of the Earth's surface accumulated rapidly, such that most of the world's coastlines had been mapped, at least roughly, and the continental interiors by the twentieth century.”

William H. Galvani Rare Maps Collection, circa 1570-1909
The William H. Galvani Rare Maps Collection is comprised of maps and atlas pages from the 16th to 20th centuries depicting various cities, countries and continents. There are a significant number of maps related to the French Revolution, Napoleonic Wars, United States Civil War, Crimean War and the Russo-Japanese War.  The collection also contains late 19th century topographical surveys of the Adirondacks, early 20th century military surveys of Cuba, and maps detailing the voyages of Captain James Cook. Series 6, World, is comprised of maps related to one or more continent, or depicting the entire world.  There are several maps from related to the history of France, including Victoires, conquêtes, désastres, revers et guerres civile des Françaus de 1792 à 1815.  Related maps from Histoire de Napleon by M. de Norvins depict the Napoleonic wars in Europe and Africa.  Maps of ancient civilizations can be found in Los Comentarios de Cayo Julio Cesar, Histoire de Polybe by Jean Charles de Folard, and Nouvel Atlas Physique, Politique et Historique de l'Empire Ottoman by J.J. Hellert.  Maps related to world travel include those from the Journal of the Royal Geographical Society, maps depicting the circumnavigations of Captain Cook in the late 18th century, and Colton's Atlas of the World, Illustrating Physical and Political Geography from 1856 (Boxes 10 - 14).

Clair V. Langton Papers, 1914-1973
The Clair V. Langton Papers consist of materials created and assembled by Langton, primarily during his years as faculty member in physical and health education at Oregon State University from 1928 until 1964. The bulk of the collection consists of materials documenting Langton's involvement in state, regional, and national professional organizations, including the Oregon Tuberculosis and Health Association (OTHA), the Western College Physical Education Associaion (WCPEA), and the American Association for Health, Physical Education, and Recreation (AAHPER). The Papers also include substantive correspondence as well as course materials, publications, military and personal records, ephemera, and photographs. Box 12 includes an Atlas of World Maps (1943) used by students in the Army Specialized Training Program.

World War II Newsmaps, 1942-1946
The World War II Newsmaps consist of poster-size newsmaps published weekly by the U.S. Army Information Branch from 1942 until 1946. Each newsmap includes maps depicting the previous week's advances and activities on the war-front in Europe, Africa, and Asia; brief news items and photographs; and exhortations. The newsmaps include both world maps and maps of local areas. Some of the newsmaps provided cues for recognizing tanks, ships, and planes; information about enemy organization, equipment, and uniform insignia; highlights of service achievement; or graphics intended to inspire and motivate military personnel. After mid-1945, the newsmaps became more like promotional posters.