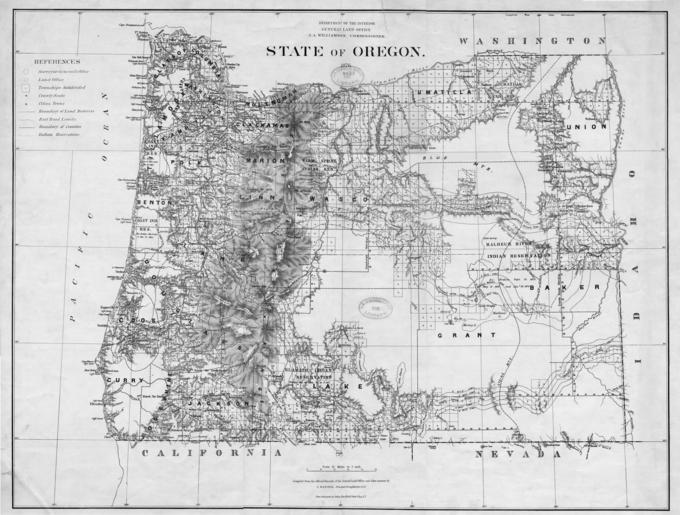 Exceptions are listed below:

Planimetric Maps of Oregon and Washington, 1947
The Planimetric Maps of Oregon and Washington consist of 60 detailed maps of the Columbia and Willamette Rivers and nearby towns and landscape features immediately following World War II. Coverage of the maps in this collection is centered on Portland and extends on the Willamette River from Oregon City north to the confluence with the Columbia River and on the Columbia River from St. Helens (Oregon) to Camas (Washington). The maps are at 1:9,600 scale. The collection includes sheets with the following names: Camas (6 sheets); Hillsboro (9 sheets); LaCenter (3 sheets); Oregon City (14 sheets); Portland (18 sheets); St. Helens (8 sheets); and Tualatin (2 sheets). An index map (made at a later time) showing the location of all the sheets is also included. The maps depict water features and land cover, including rivers, lakes, sloughs, marshes, wetlands, islands, and forested areas. Streets, roads and highways as well as railroads, bridges, airports, and shipping terminals are shown on the maps. Parks and wildlife refuges are included. Structures such as schools and churches; mills and factories; and industrial sites, gravel pits, and oil tanks are also depicted. The extent and claimants for land claims are shown on the maps.

Maps of Washington (State) and the Pacific Northwest, 1863-1994
The Maps of Washington (State) and the Pacific Northwest consist of historic and superseded maps depicting forest resources, geology, public lands and land use, hydroelectric projects, highways, and railroads in Washington and the Pacific Northwest region. Most of the maps in the collection are of all or part of the State of Washington. Regional maps depict Oregon, Washington, Idaho, Montana, and, in some cases, California and Wyoming. The maps were created by various U.S. government agencies, State of Washington departments, and private organizations. Maps of national forests and national parks, primarily in Washington, are included in the collection. These include several maps of Mount Rainier and other Cascade peaks, many of which depict the extent of mountain glaciers. Of special note are maps of hydroelectric projects in the Columbia River Basin. These provide information on dams, reservoirs, irrigation projects, and power transmission. The maps include government publications on projects' status, local newspaper documents, and maps depicting power plant location and the distribution and transmission of electricity.