EDUCATION: WHERE BREWERS GO TO LEARN 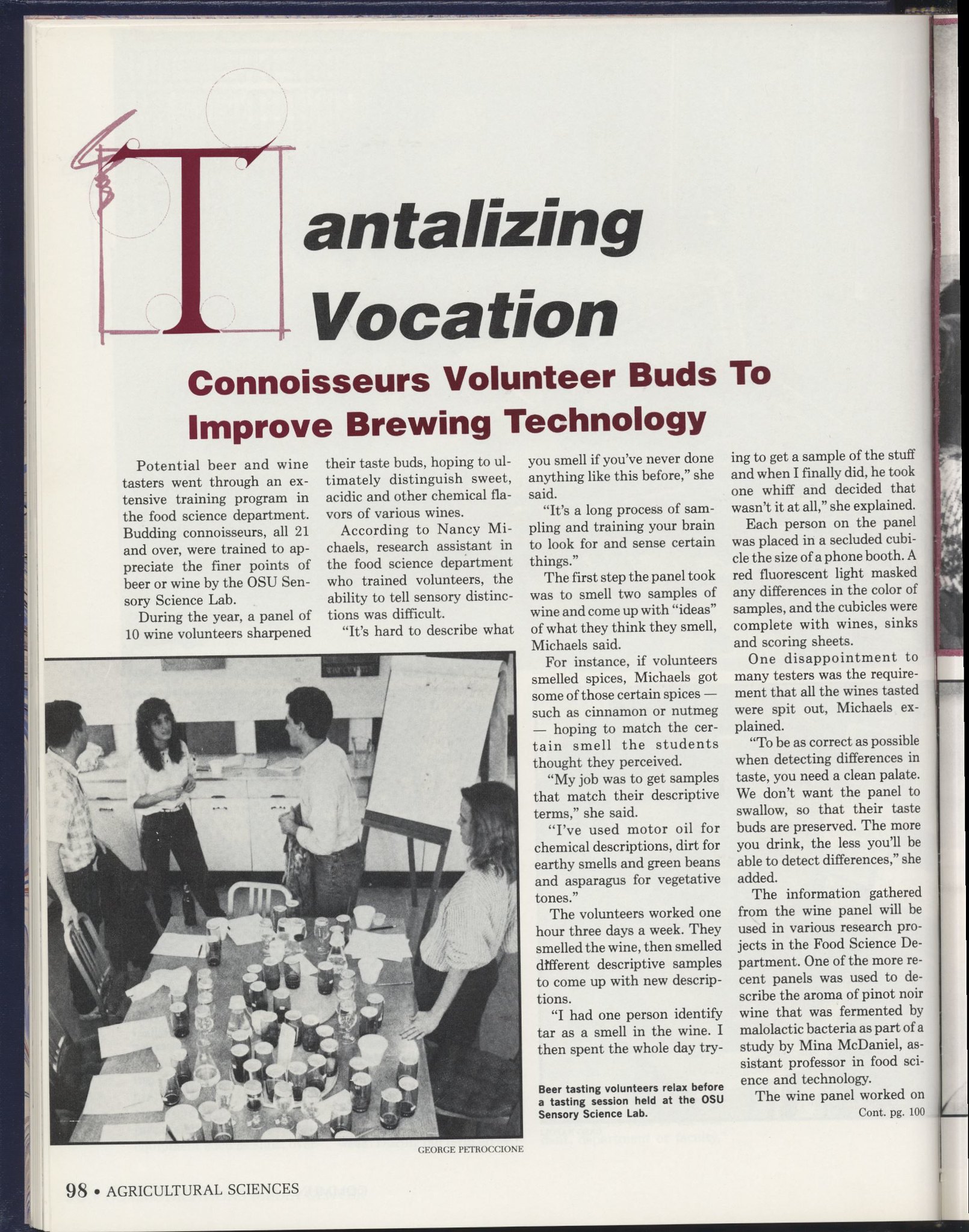 Brewers learn their craft from their families and mentors, at universities and clubs, through certificate programs, professional guilds, professional associations, publications and newsletters, through home brewing or apprenticeships.

"Brewing Schools, institutions of higher learning that offer programs designed specifically for aspiring brewing professionals. They provide formal practical and theoretical training in those branches of science and engineering that are relevant for beer making on a commercial scale in a modern brewery. People have brewed for at least 8,000 years, but brewing schools, perhaps surprisingly, are a phenomenon of only the past 150 years. Before that time, brewers essentially learned their craft by doing it and were often taught by family members."

OSU Food Science and Technology Fermentation Sciences: the Fermentation Science program, one of just a handful in the nation, is a “hands-on” applied science addressing the use of microorganisms as processing agents in the production of wine and beer, as well as a variety of other fermented foods such as cheese, yogurt, soy sauce, pickles, breads and fermented vegetables.

UC Davis Food Science and Technology Brewing: the primary research focus at UC Davis reflects the changing needs of the brewing industry (and related industries. The specializations cover issues of real pertinence to maltsters and brewers and primarily focus on quality of product from both industries.

The Brewers Association maintains a list of brewing education programs, including Pro Brewing Schools, 4-Year Degree Programs, Associates & Diplomas, and Certificate Programs. Craftbeer.com (a section of the BA) also has a list of online and in person beer schools.

Siebel Institute of Technology is North America’s oldest brewing school and was founded in Chicago as John E. Siebel’s Chemical Laboratory by John Ewald Siebel in 1868.

Wahl-Henius Institute of Fermentology is a brewing research laboratory and school in Chicago that operated between 1886 and 1921.

Brewing Science and Beverage Technology at the Technical University of Munich in Weihenstephan.

The United States Brewers' Association was a trade organization that existed from 1862 to 1986.

The Brewers Association (BA) is a not-for-profit trade association for brewers. More than 5,400 U.S. brewery members and 46,000 members of the American Homebrewers Association are joined by members of the allied trade, beer wholesalers, retailers, individuals, and associate members. Because it is a membership organization, there are sections of the web site that is for members only; I've only included information that is freely available.

The American Society of Brewing Chemists was founded in 1934 to improve and bring uniformity to the brewing industry on a technical level. Today, ASBC is comprised of individual and corporate members worldwide representing breweries of all sizes, the allied industries that supply the brewing industry, academic researchers, government agencies, and organizations associated with regulation of the brewing industry.

The Master Brewers Association of the Americas was formed in 1887 to promote, advance, and improve the professional interest of brew and malt house production and technical personnel. Today, there are more than 4,000 members in 25 different districts from more than 50 countries throughout the world. It is a global community working to advance the brewing, fermentation, and allied industries by advocating the exchange of knowledge; creating, assembling, interpreting, and disseminating credible and beneficial information; developing world-class education offerings; and providing valuable personal and professional development opportunities. They are a non-profit organization.

The Beer Institute is a national trade association for the American brewing industry, representing both large and small brewers, as well as importers and industry suppliers. The organization was founded in 1862 as the U.S. Brewers Association and reorganized as the Beer Institute in 1986. They represent the beer industry before Congress, state legislatures, and public forums across the country, focusing on public policy, community involvement, and personal responsibility. Like the Brewers Association, this is a membership organization and there are sections of the web site that is for members only; I've only included information that is freely available.

The National Beer Wholesalers Association provides leadership to the independent beer distribution industry; advocates before government and the public; encourages the responsible consumption of alcohol; and provides programs, services, and data.

What about brewers associations outside the United States?