Farming and Agriculture in Archival and Manuscript Collections 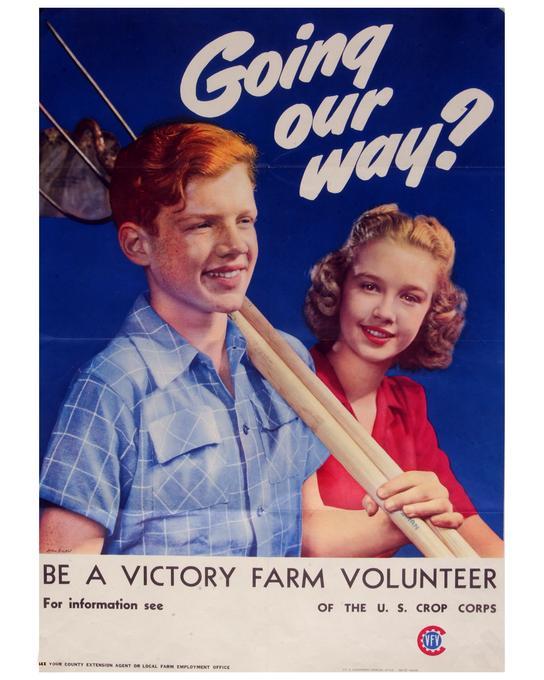 The Agricultural and Resource Economics Department Records document research, teaching, and extension activities in agricultural economics and farm management at Oregon State University and provide extensive documentation of the economics of Oregon agriculture. The records include administrative materials, speeches and presentations, reports and original data for studies conducted by department faculty, records of the Western Rural Development Center, and extensive economic and statistical data on agriculture in Oregon assembled by the Oregon Agricultural Information Network (OAIN).

The College of Agricultural Sciences Photographs were taken or assembled by College staff and faculty to document the Oregon State University's academic and research programs in agriculture; Branch Experiment Stations in Oregon; faculty, students, and alumni; international programs; and special events, conferences, and workshops. The bulk of the images are b/w prints and color slides; the collection also includes nitrate and glass negatives; some film negatives; and a few color prints.

The Corvallis-Albany Farmers' Markets Records document the establishment, organization, and promotion of seasonal markets for farm-direct products in Corvallis and Albany, Oregon. The non-profit organization, Corvallis-Albany Farmers' Markets, was established in 1998 through the merger of the Corvallis Wednesday and Saturday markets with the Albany Saturday market. Promotional materials include posters, flyers, bookmarks, and brochures. The Records also include vendor handbooks and applications, the Market Line newsletter, grower information sheets, clippings, annual reports, and related materials.

The Decker Photograph Collection consists primarily of born digital images taken by Decker, a Salem-based photographer, of various crop festivals held all around Oregon. The collection is open for research, however permission to publish must be granted by Phil Decker or his heirs.

The Extension and Experiment Station Communications Records document preparation of publications, news releases, radio programs, and public service announcements by Oregon State University Extension programs in agriculture, home economics, marine resources, and 4-H. In addition, the records document the communication of the results of OSU Agricultural Experiment Station research to the public and other researchers. The records include sound recordings, publication records, and biographical files for Extension agents and specialists.

The Extension Service Records pertain to the administration and programmatic activities of the Oregon State University Extension Service. The records document policies and procedures, research activities, special events, and services provided to Oregonians at the state and county levels. They also document the service's relationship with the federal government and extension services in other states.

The Farm Crops Department Photographs illustrate research activities on crops, such as grasses, and the use of agricultural machinery. The images primarily depict plants such as barnyard grass seedlings, phorium, and fescue undergoing experimentation and land under cultivation by both horse drawn and mechanical farm equipment at the Oregon Experiment Station.

The Farmer Photographs include many images of livestock - especially cows, rabbits and pigs - as well as barns, silos, farmsteads, agricultural machinery, produce and crops. The collection also includes documentation of rural life in the Pacific Northwest of the early twentieth century, and includes images of children and adults at work and play. Most of the images contain textual annotations on their reverse and a few have been annotated on the obverse for cropping and other editing prior to publication.

The Western Farmer Photographs contain images captured and edited for use in the publications Western Farmer and Farmer's Tribune during the early decades of the twentieth century. The photographs include documentation of livestock in the field and for show; children at play; produce being grown and displayed; farm equipment; and men and women engaged in various forms of agricultural labor. Along with textual annotations on their reverse, many of the collection's photos have been marked on the obverse by copy editors with the intent of cropping, shading and/or enlarging an image prior to placement for print in the magazine.

The Francis T. Howard Diary is comprised of journal entries written by Oregon pioneer Francis T. Howard recording his life as a farmer and mill operator outside Mulino, Oregon between January 1858 and June 1859. Also included are newspaper clippings and other ephemera documenting the Howard family between 1863 and 1946. The collection is available for research.

The Lawrence A. Burt Papers document the teaching, extension, and publishing activities of Burt during his 30 years as a faculty member in Agricultural and Resource Economics and Extension Economist at Oregon State University from 1979 to 2009. Burt's work focused on agribusiness management, marketing of agricultural products, farm management and agricultural finance as well as the management and dissemination of economic data pertaining to agricultural crops and products.

Farming and Agriculture in the Rare Book Collections

The rare book collections in Special Collections and Archives Research Center have a wealth of material related to the history of farming and agriculture; indeed, this is one of our strongest collecting areas, made up of many sub-collections related to the history of farming crops, soil quality, and planning for farms. Materials span five centuries, and are primarily related to farming in America and England. To find these materials, search for the following keywords:

Farming and Agriculture in the Main Collection

Searching the Main Collection of the library is extremely beneficial for sources. Though the terms and searches may not be obvious in the beginning, the deeper you dig, the better the finds! It's also important to note that there is a plethora of sources in the Special Collections and Archives regarding Farming and Agriculture at OSU, and there's a potential for the sources you do find in 1Search may actually be from Special Collections and Archives. However, this shouldn't deter you! If you're unsure, don't be afraid to ask a librarian for research tips.

* All searches above were done with "Oregon State University" as a term as well.

Farming and Agriculture in ScholarsArchive@OSU

There are several key places within the county that have a lot of farming history. The next few pages will go more into depth about more centralized areas such as Corvallis, Alsea, and Kings Valley / Hoskins area. Though not all information will be provided, these pages will be a great starting point to further your own research!

It will include links of all kinds:

Below, you will find some general links and information about Benton County to help get started!

Benton County is full of rich farming and agricultural history that may not always be obvious.

There's Oregon State University, which was named the Oregon State Agricultural College in 1882. Agriculture and farming has been very prevalent in the college's history from early on, which you will see in the "Corvallis" tab.

Below, you'll find more information about the Benton County Historical Society and Museum, which is a great resource for Agriculture and Farming history.

Here's a map of what Benton County looks like: 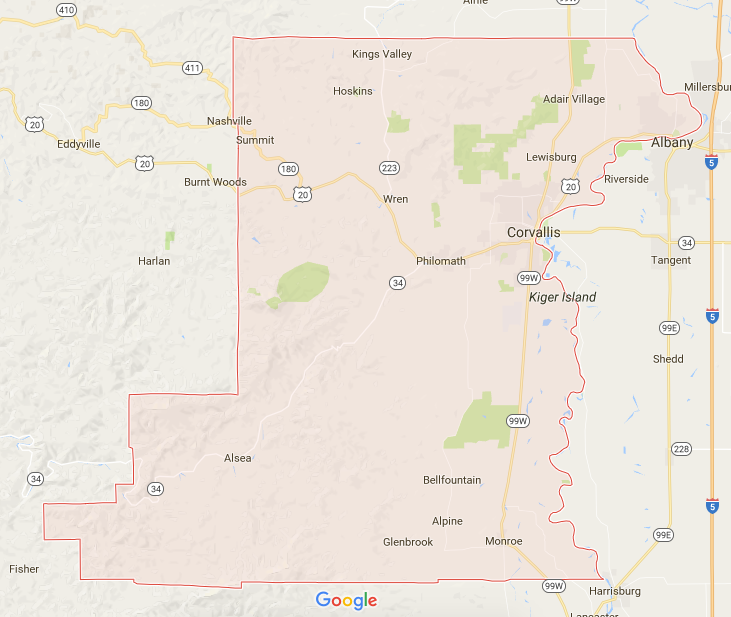 As you can see, it's pretty large and encompasses many towns and cities. The county is roughly 679 square miles, and as of 2014 boasts a population of approximately 86,000 (huge compared to the 1850 population of 814.)

Some key names/words and search terms found while searching through their database:

Also of note, the Benton County Historical Society has a Historic Benton County Business Directory, dating back to as early as 1867. From here you can look up businesses by name, location, year, and individual people!

Corvallis is a main hub of agriculture and local food. Between being the location of Oregon State University and several acres of farmland, there's bound to be lots of history, which there is!