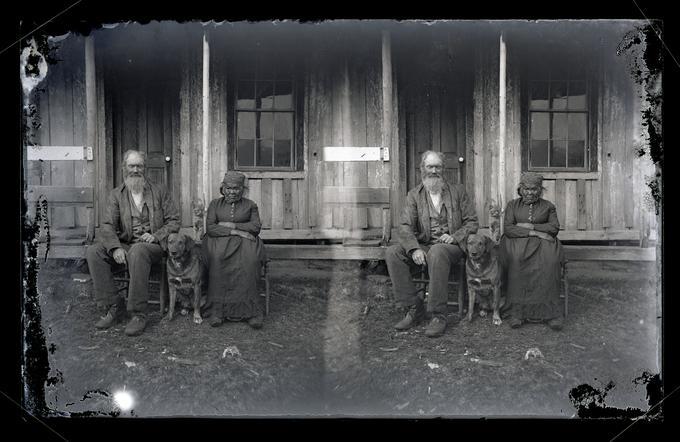 First described in 1832 by English physicist Sir Charles Wheatstone, stereoscopy was improved by Sir David Brewster in 1849, and was popular in the United States and Europe from about the mid-1850s through the early part of the 20th century. Similar to card photographs, “stereograph” refers to a format, not a technical process. Many different processes, in fact, were used to produce stereographs; daguerreotypes and ambrotypes were used to create stereographs up to the early 1850s, and glass stereographs were in use from 1852 to 1860. Regardless of process, stereographs are formed by placing two images side by side. These were most commonly produced with cameras that had two lenses side by side, 2.5 inches apart, so that two exposures were made simultaneously. Most commonly, stereographs were viewed on a hand-held stereoscopes, a device developed by Oliver Wendell Holmes in 1861; viewed on such a device, stereographs gave the image a sense of three dimensionality. Stereographs enjoyed popularity from the late 1860s until after the turn of the century (Ritzenthaler, et. al., 41).

Frank Patterson Stereoscopic Photographs, 1911-1920
The Frank Patterson Stereoscopic Photographs contain scenic images of natural features within the Cascade Range and Columbia Gorge in both Oregon and Washington. Included are views of the Columbia River, mountains, lakes, rustic bridges, lava tubes and dams. Frank Patterson was a prolific photographer who worked in studios in Medford, Oregon and Santa Rosa and San Francisco, California during the 1920s-1950s.  The stereoscopic photographs were collected by Gerald W. Williams and were originally included with his general collection. There are 45 stereoscopic images in this collection.

Benjamin A. Gifford Photographs, circa 1885-circa 1920
The Benjamin A. Gifford Photographs consist of photographs made by Gifford during his career as a photographer in Portland and The Dalles, Oregon. The images depict Native Americans, primarily of the Columbia Plateau region; the Columbia River and the Historic Columbia River Highway; Central and Eastern Oregon; Gifford Family members; and many unidentified individuals and groups. Gifford arrived in Oregon and worked first in Portland until 1895, when he opened a studio in The Dalles. He returned to Portland in 1910. The stereoscopic images, many of which are glass negatives only (i.e. without accompanying prints), can be found in Boxes 01, 14, 19-30, 32, 34, 36, 45, and 56. Three stereoscopic images from the collection have been digitized and can be found on Oregon Digital.

Gerald W. Williams Regional Albums, 1875-2000
The Gerald W. Williams Regional Albums consist of images and ephemera assembled by geographical regions. They were acquired and compiled Williams in the course of his work as a Forest Service sociologist and historian and due to his avocational interest in the history of forestry and the history of the United States, especially that of the Pacific Northwest region.  The albums document popular tourist destinations, national parks, the natural environment, prominent natural and architectural landmarks, forests and forest operations, mining, trains and railroads, early towns and cities, prominent citizens, and human activities, such as public events, hunting and fishing, and everyday life. Gerald Williams worked for the U.S. Forest Service from 1979 to 2005 as a sociologist (1979-1998) and historian (1998-2005). The stereoscopic images in this collection can be found in Series 8, Willamette Valley Region, Box 08.