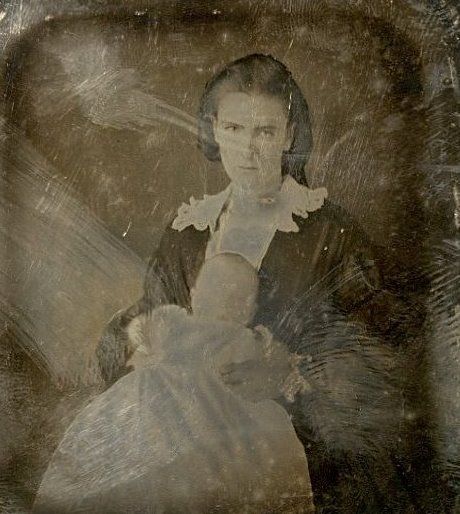 Named for Louis-Jacques-Mandé Daguerre and introduced worldwide in 1839, the name "daguerreotype" refers to a specific image type created using a specific chemical process. To create a daguerreotype, a copper plate was coated with silver, then cleaned and polished. The plate was placed in a small box, where it was exposed to iodine vapors, creating a light-sensitive layer on the surface of the plate. This “sensitized” plate was then placed in a camera and exposed to light for five to seventy minutes (improved lenses and other innovations would eventually reduce exposure times to between five and forty seconds). After exposure, the plate was removed from the camera and placed in another box, suspended at an angle over a pan of heated mercury. The mercury vapor adhered to the surface of the plate, acting to define the image. When the image had been sufficiently developed, the plate was removed, washed in distilled water, and then dried. After drying the images were often colored by hand, and put under glass in a decorated case. Each daguerreotype is unique in that it is a direct positive image – there is no negative (Ritzenthaler, et. al., 29).

E.E. Wilson Photographic Collection, 1855-1953
The E. E. Wilson Photographic Collection consists of images of Wilson, a Corvallis native and Oregon Agricultural College (OAC) alum, as well as his family and friends, the OAC campus, Corvallis, and other locations around the Pacific Northwest. The collection also includes images of the 1915 Panama Pacific Exposition in San Francisco and photos of Siletz tribe members. Examples of daguerreotypes can be found in Box 05 (Image #0332, and 343a).