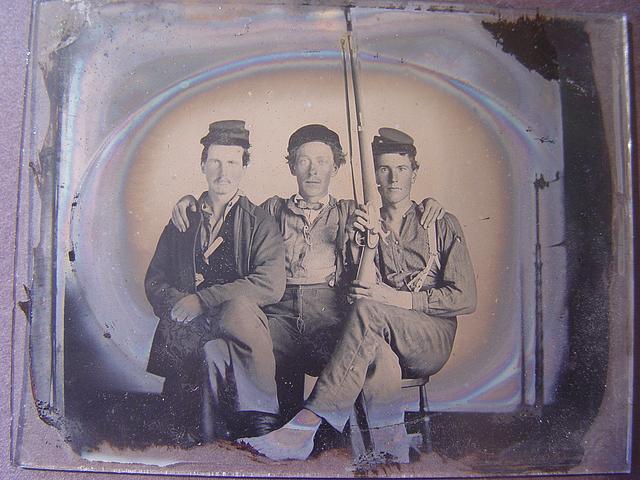 The introduction of the wet collodion process for making glass negatives by English sculptor Frederick Scott Archer in 1851 transformed the art of photography. It was a much faster and cheaper process, paper prints could be easily produced from the resulting glass plates, and details were rendered far more crisply than with daguerreotypes. In 1854, James Ambrose Cutting of Boston took out several patents relating to the process, and thus may be responsible for coining the term "ambrotype." Ambrotypes are a particular application of the wet collodion process. Collodion - a mixture of “gun cotton” (a highly combustible material made by exposing cellulose to nitric acid), ether, and alcohol - was mixed with potassium iodide or bromide and poured evenly over the surface of the base material. The plate was then soaked in silver nitrate solution, placed in a holder, exposed in a camera, and developed, all while still wet. To make the image appear positive the plate was backed by a black material, either cloth, paper, metal, or paint. As finishing steps, ambrotypes, similar to daguerreotypes, were often hand-colored and put in decorative cases. Ambrotypes are distinguishable from daguerreotypes by the silvery, reflective quality of the latter’s image (Ritzenthaler, et.al, 34-35).

E.E. Wilson Photographic Collection, 1855-1953
The E. E. Wilson Photographic Collection consists of images of Wilson, a Corvallis native and Oregon Agricultural College (OAC) alum, as well as his family and friends, the OAC campus, Corvallis, and other locations around the Pacific Northwest. The collection also includes images of the 1915 Panama Pacific Exposition in San Francisco and photos of Siletz tribe members. Examples of ambrotypes can be found in Box 05 (Image #0330-0331,﻿ 0334, 0433, 0577).