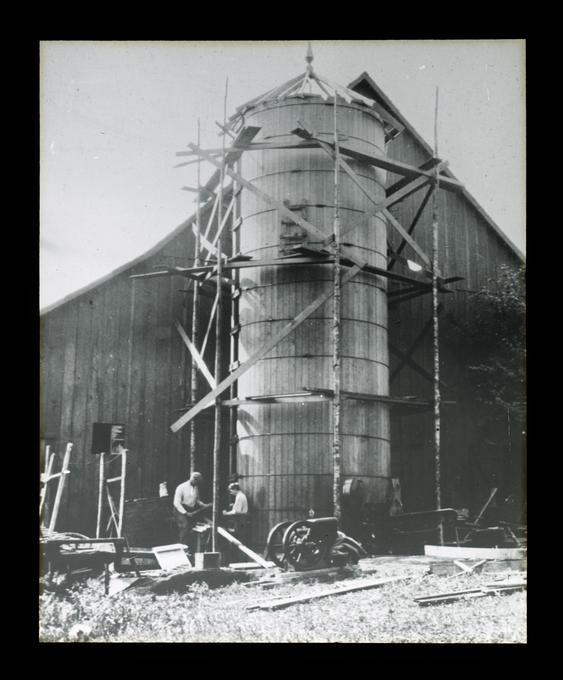 Using the collodion process, lantern slides were created either by printing negatives exposed in a camera onto another negative (thus producing a positive for projection) or by exposing a sensitized glass negative directly in the camera and developing it in such a way as to produce a positive. Used both to educate and entertain, early “magic lantern” shows were set to music and included props, and were often also used by traveling lecturers (Ritzenthaler, et. al., 3-4, 37-38).

Gerald W. Williams Lantern Slides Collection, circa 1900s-1930s
The Gerald W. Williams Lantern Slides Collection consists of 184 lantern slides assembled and acquired by Williams in the course of his work as a Forest Service sociologist and historian and due to his avocational interest in the history of forestry and the Pacific Northwest region.  The slides depict forests and forest operations; landscapes and scenery; and birds, wildlife, and plants.  The collection includes advertisements for local businesses in the McKenzie River area.  Gerald Williams worked for the U.S. Forest Service from 1979 to 2005 as a sociologist (1979-1998) and historian (1998-2005). Select images from this collection have been digitized and are available in Oregon Digital.

Visual Instruction Department Lantern Slides, circa 1900-1940
The Visual Instruction Department Lantern Slides include sixty nine sets - a total of 2696 images - of mounted lantern slides, many of which are hand-tinted. One set contains 2"x2" glass mounted color slides. The sets, which pertain to a variety of topics, were made available for loan to schools, churches, and other organizations in Oregon. Most sets include a typescript lecture (indicated on the inventory) which provides a general background on the set's topic as well as information on each slide. Topics include many related to Oregon and the Pacific Northwest, such as Oregon Birds, Oregon Industries, Northwest Indians, Salmon Industry. Several sets have biblical themes, and others pertain to U.S. history and cultures in Europe. Some of the Oregon related slides were taken by Oregon photographers such as Gifford & Prentiss, Weister Co., Herman T. Bohlman, William L. Finley, and Lee Moorhouse. H.C. Tibbits took many of the photographs of California and the western United States. Images from this collection have been digitized and are available in Oregon Digital. Hand-tinted slides are indicated in the finding aid.

William Evans Lawrence Papers, 1893-1945
The William Evans Lawrence Papers consist of materials generated by Lawrence, an OAC Botany professor, including research data, photographs and radio scripts related to Lawrence's work plant physiology, Oregon trees and other topics concerning the horticulture of, primarily, the Pacific Northwest. An addition to the collection (Accession 2015:20) consisted of materials generated by Lawrence including article reprints, a certificate, conference papers, Extension bulletins, notebooks, photographs, radio scripts, a student paper, and textbooks. Numbering 631 images in total, the photographs are made up of glass plate negatives (530), lantern slide positives (56), and film negatives (45). Primarily depicting trees and vegetation in range and mountain environments in Oregon, Illinois, Indiana, Washington, and Massachusetts (Wood's Hole area) some of the photographs portray specimens of plants prepared for "plant physiology lab" studies. Most of the photographs were taken in Oregon. There are also portrait and group shots of family members and friends at home and on trips to the Oregon coast, Marys Peak, and at Mount Rainier. The lantern slides are in Box 06 of Accession 2015:020.

Magic Lantern Slide Collection, circa 1900-1935
The Magic Lantern Slide Collection consists of several sets of magic lantern slides and one set of glass-mounted 2x2 slides that were likely used for home entertainment or educational purposes. The collection includes images of artwork; a series of 8 slides titled The Evils of the Drink (Box 04); and several movable, animated slides for children. One set of 12 slides are not mounted in wood frames; this set depicts a children's story with inscriptions in French. A handwritten translation into English accompanies the slides. A Set of Twelve Natural History Sliders depicts drawings of wildlife (animals and birds), with 4 images per slide. A set of 10 items from the American Civil War Series includes artists' depictions of General McClellan and Fort Sumter. The glass-mounted 2x2 slides consist of 59 images, primarily b/w photographs and a few line drawings, titled Visit of Farmers to Middle Tennessee and Muscle Shoals, Alabama. These images depict farms, fields, and agricultural crops. Of particular interest is a set of slides on the American Civil War, found in Box 03.

James E. Oldfield Papers, 1951-2010
The James E. Oldfield Papers document Oldfield's research and professional activities in animal nutrition, especially the role of selenium in eliminating white muscle disease in sheep and other ruminants. Oldfield completed his doctorate at Oregon State College in 1951 and joined the faculty upon completion of his degree. He retired in 1985. There are 27 lantern slides included in the collection; these slides document Oldfield's mink research (“Effects of Supplementing a CF-Genic Ration with Organic Iron”), and can be found in Box 6.

Warren C. Wilson Western Alpines Project Lantern Slides, 1936-1938
The Warren C. Wilson Western Alpines Project Lantern Slides consist of 9 lantern slides of photographs made by Wilson during a western alpine flora collecting trip in 1936. The slides depict the Mount Baker and Mount Shuksan areas in the North Cascades of Washington, Mount Rainier, Jasper National Park in Alberta, and the Portland (Oregon) Airport on Swan Island. An offprint of the article "Collecting Western Alpines by Air", written by Wilson and published in The National Horticultural Magazine, provides details of the collecting trip and is also part of the collection. One of the photographs of Mount Rainer is published in the article. The other slides are annotated with references to page numbers in the article. The lantern slides in the collection are found in Box 02.

Oregon State University Military Photographs Collection, 1875-1975
The Oregon State University Military Photographs Collection consists of images of military education and cadets at Oregon State from various sources and time periods. Individual images include portraits and group shots of military cadets and officers, as well as reviews, formations, training, and instructional materials. Photographs are arranged chronologically by historical era. Courses in military science have been taught at Oregon State since the early 1870s. Images from this collection have been digitized and are available in Oregon Digital. The lantern slides in the collection were used as military training aids during World War I, and can be found in Boxes 03 and 04.

Paul E. Bernier Papers, 1930-1992
These papers were generated and collected by Paul E. Bernier and document his research in chicken breeding and genetics. The collection contains correspondence, publications, research records, certificates, and photographs. An addition to the Bernier Papers (Accession 2005:070) consists of photographic images used by Bernier for instruction. Totaling 1028 images in all (919 35mm slides and 109 lantern slides), the slides document poultry afflicted by various genetic disorders, as well as printed data in tables and graphs, and Bernier engaged in research. The lantern slides in this addition are in Boxes 01 - 03.

John  Garman Photographic Collection, 1896-1966
This personal collection of photographs taken and assembled by John Garman includes many studies of campus buildings and sights, as well as extensive photographic studies from vacations in the 1960s. Many of the photographs in Garman's collection were used as instructional tools for the teaching of photography at Oregon State. Kidder Hall and the Lady of the Fountain received special attention among earlier photographs, and the construction of Weniger Hall was extensively covered among later photographs. The vacation sets include many photographs of Bryce Canyon and Zion National Park. This collection includes a variety of forms, but consists predominantly of black and white prints. Lantern slides can be found in Box 03 (Images #10, 37, 39, 41).