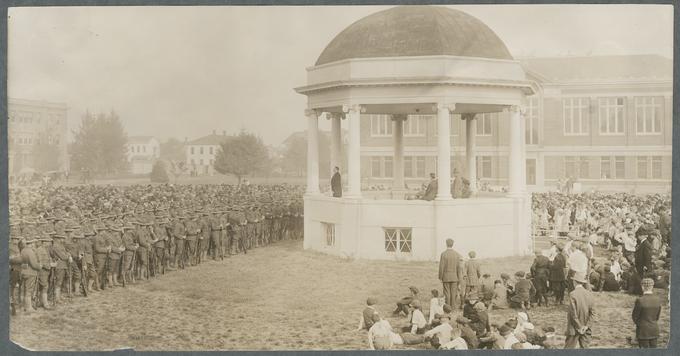 Developed in the 1870s, silver gelatin prints - also known as gelatin developing out paper (DOP) - were initially comprised of two layers: a substrate, or foundation, of paper; and an emulsion of silver salts in gelatin that created a light-sensitive top layer that, following exposure of the negative and development in a chemical bath, formed the image. Later, a middle layer of barium sulfate, or baryta, was added between the paper and the emulsion, acting to limit the penetration of the emulsion into the fibers of the paper, resulting in a more even emulsion and more uniform blacks.

The light-sensitive materials used to create silver gelatin prints are stable under normal storage conditions, and can be exposed and processed many years after their manufacture. This is in contrast to the collodion wet-plate process, which had to be exposed and developed immediately after coating.

Mount Hood Area Excursion Photograph Album, circa 1910
The Mount Hood Area Excursion Photograph Album (P 310) is comprised of 111 gelatin silver prints depicting a multi-day excursion near Mount Hood, Oregon, taken in approximately 1910. The photos depict many stages of the trip including preparation, travel, and wilderness living and include extensive photography of the natural landscape.

Banes-Howland Crater Lake Auto Trip Photograph Album, 1916
The Banes-Howland Crater Lake Auto Trip Photograph Album documents a 17-day automobile journey from Portland, Oregon to Crater Lake, Oregon and back in July and August 1916. The album is comprised of 59 photographs and an extensive newspaper article detailing the trip from Portland to Crater Lake via Central Oregon and the return trip through the Willamette Valley. The journey was undertaken by the Banes and Howland families in an Oakland 6 touring car and marks one of the first visits to the rim of Crater Lake via automobile. The album includes 58 pasted-in silver gelatin photographic prints and one loose print.