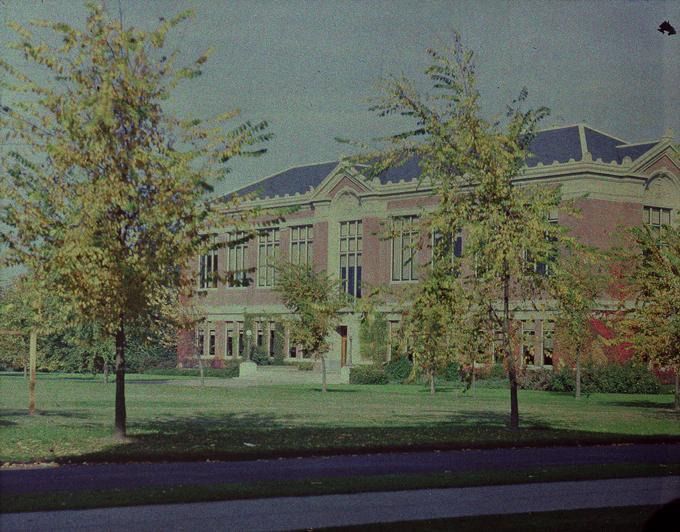 Patented by brothers Auguste and Louis Lumiere in 1902, autochromes were not commercially available until 1907. Microscopic starch grains – stained in orange, green, and violet – were sprinkled on the glass plate so that the colors were evenly distributed. The space between the grains was colored black, making the autochrome a four-color process. An emulsion, or layer, of silver gelatin was applied over the starch grains. The plate was exposed through the glass side with the colored starch grains acting as a filter. The plate was then developed as a positive. Autochromes are often found in holders that allow for backlit viewing (i.e. projection) (Ritzenthaler, et. al., 52-53).

John Garman Photographic Collection, 1894-1966
This personal collection of photographs taken and assembled by John Garman includes many studies of campus buildings and sights, as well as extensive photographic studies from vacations in the 1960s. Images from this collection have been digitized and are available in Oregon Digital. Examples of autochromes in this collection can be found in Box 05 (Images #35-37, 40, 42-49, 44a, 93, 95, 98-99).

Buildings Photographic Collection, 1880-2002
The Building Photographs collection documents Oregon State University buildings, grounds, and facilities as well as a limited number of other notable buildings in Corvallis. The collection also includes approximately 20 line drawings of buildings located on other Oregon University System campuses. Images from this collection have been digitized and are available in Oregon Digital. Examples of autochromes can be found in Box 01 (#111, 112).