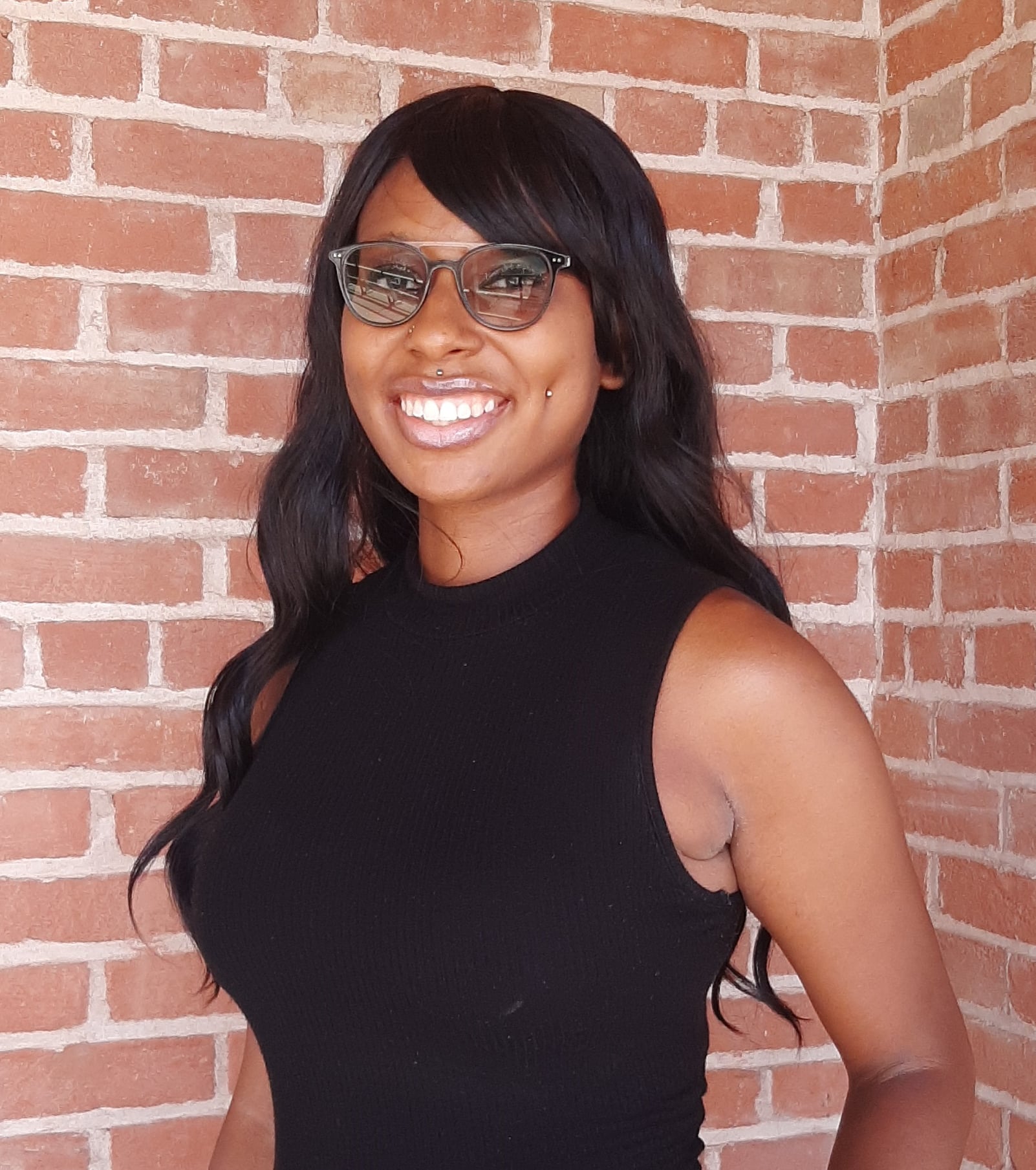 My name is Ally Fripp and I am overjoyed at the opportunity to learn and grow as a Diversity Scholar at the Valley Library. I was born and raised in South Carolina. I attained a Bachelor’s of Arts in Psychology from Colorado College, in Colorado Springs, in 2018. Currently, I am in my last year of my MLIS program at the University of Arizona where I also work as a Graduate Teaching Assistant for the School of Information.

I grew up in public libraries and would not be where I am today without them. But, my interest lies in academic librarianship. As an undergraduate, I was a federal work study student worker at my college library. I began my journey in Circulation and branched out to other departments, like Gov’t Documents and occasionally Periodicals and Special Collections. There, I became interested in how information systems work in academia and how librarians work with the campus community to facilitate scholarship. Moreover, I noted how vital library services were to my peers as mostly first generation, low income students, and/or students of color. Thus, I was inspired to pursue my MLIS and learn how to be a critical and culturally competent steward of information in academia. At my core, my goal is to work at the intersection of individuals and information and empower people of color in information environments. There is much inequality in higher education and academic librarians can help combat it by working with students and their informational needs. I am dedicated to making a difference.

I applied for the Diversity Scholars Program because it is a unique, impactful opportunity. The goals of the program align with my goals of librarianship, including creating a diverse and inclusive information environment. I am interested in the library as a system and being able to work with and learn from multiple departments in the library satisfies my curiosity about the field. The staff at the Valley Library have been extremely supportive and grant me many learning and growing opportunities. I am privileged to be doing work in this capacity moving from the student worker side of things to the librarianship aspects. I plan on incorporating this experience moving forward into my future practice as an academic librarian that centers the information needs of marginalized students. 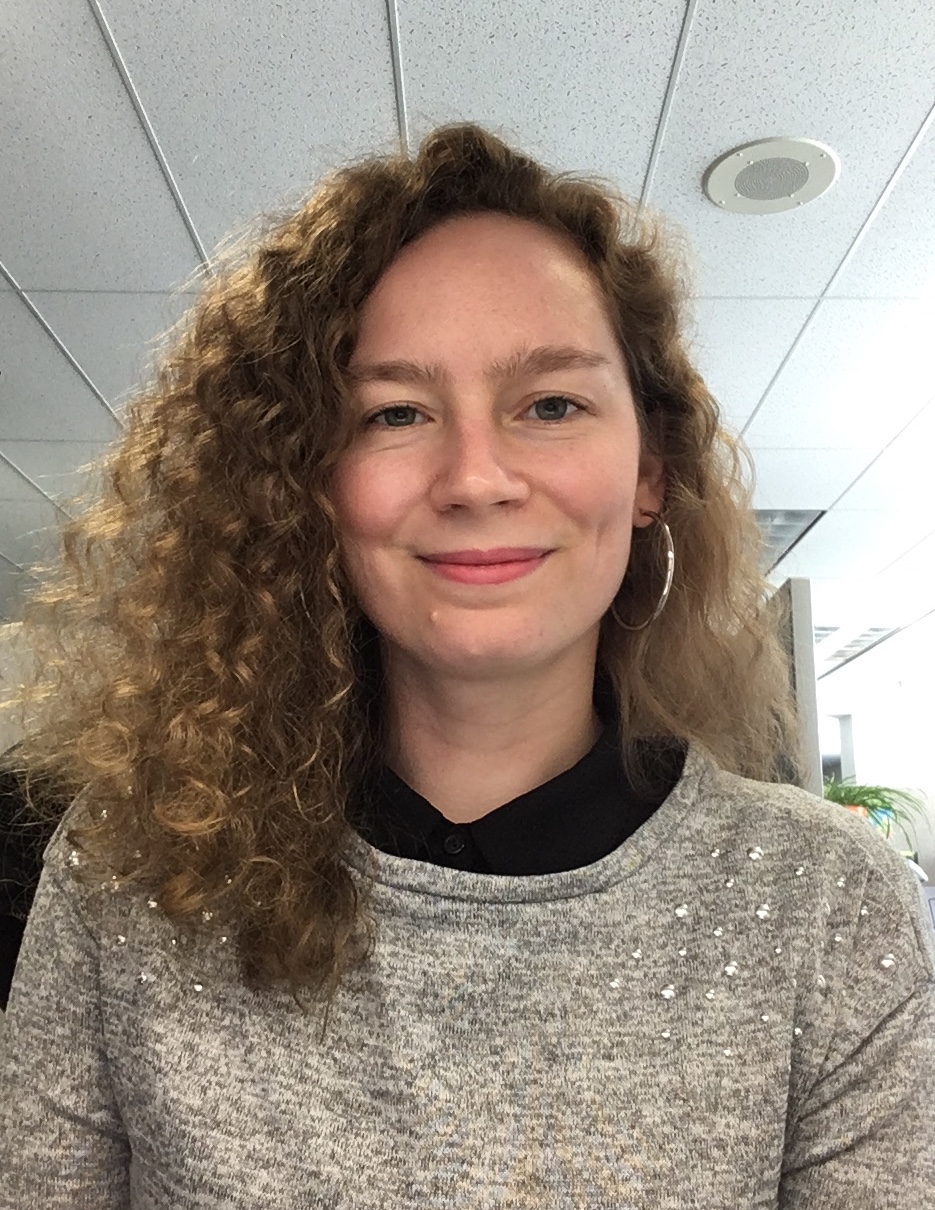 My name is Valeria Dávila and I am a first-generation college graduate from Argentina. After earning a Bachelor of Arts in Film at Fundación Universidad del Cine in October of 2018, I am currently pursuing a Master of Library Science degree with an Archives Studies concentration at Emporia State University, having started my first semester in August 2019.

Back in my home country, I worked in film production, co-producing and co-directing “Mamadua: Born into Awareness,” a documentary on women’s rights during childbirth, selected by the 30th Mar del Plata International Film Festival for its Work in Progress Competition, and internationally premiered at the 4th Mzansi Women's Film Festival in 2017, and in digital film restoration, helping restore Argentina’s film heritage as a part of the National Institute of Cinema and Audiovisual Arts (INCAA) TV Program for the Recovery of Audiovisual Heritage and the RECAM-EU Audiovisual Mercosur Program. It was during this time that I became interested in film preservation and archiving, and pursuing a career as a moving image archivist.

Moving to Oregon in 2016, I found in the Oregon State University Libraries and Press (OSULP) a home where to jumpstart my professional journey. Working for almost two years at the Special Collections & Archives Research Center (SCARC) digitizing photographic and paper-based materials for digital preservation and access, after attending the Film Preservation & Restoration School Latin America in 2017, I was entrusted to preserve the “In Our Care” series from the KOAC TV Film Collection, documenting Oregonian schools, hospitals, and prisons for the handicapped and the delinquent, a historically vulnerable and underserved population.

Understanding the archive practice as an agent of change, now I am rejoining OSULP as a Diversity Scholar after interning at Yale University’s Film Study Center, I am eager to help SCARC to better preserve and provide access to its audiovisual collections and to empower the Latino community in Oregon by helping preserve and provide access to the Latino materials at the Valley Library, safeguarded by the Oregon Multicultural Archives (OMA).

"Overcoming Subtitles: Valeria Estefanía Dávila Gronros on the Importance of Diversity in Film" ProQuest interviews a MLIS student and scholarship recipient about her bourgeoning career in audiovisual preservation and archiving

My name is Bridgette Flamenco (née Garcia). I am a first generation Mexican American and I grew up in Los Angeles, California. I attained my Bachelor of Arts in political science at Oregon State University in March of 2018, making me the first college graduate in my family. I am currently enrolled in San Jose State University’s Master of Library and Information Science program and started my first semester in August of 2018.

My interest in the library profession arose from a love of books. I grew up going to my public library and checking out books on a near weekly basis; once I graduated from high school, I began working as a public library page. As an employee of a public library, I realized that librarians do more than cover the reference desk. In addition to helping one find information on a particular subject, librarians constantly come up with ways to support and engage their community’s lifelong learning abilities. It became my understanding that through their programs and services, libraries in general had managed to grow into a force that worked to contribute positively towards their patrons and community as a whole. It was this realization that pushed me to strive for a career in the library sciences field. I specifically wanted to work to make the resources that libraries offered more well-known and more accessible, especially within minority groups.

I applied to the Diversity Scholars Program because I wanted to work and learn in an environment that engaged in creating a diverse and inclusive library sciences field. The staff at the Valley Library are made up of incredibly knowledgeable librarians who are consistently working to improve their services and to help students succeed in their academic studies. Being mentored by such compassionate and experienced individuals has been incredibly beneficial in terms of understanding the inner workings of academic libraries. Consequently, I hope to take this experience to one day work my way to a position within an academic or public library and collaborate with others to create change that would meet the information seeking needs and behaviors of minority groups. 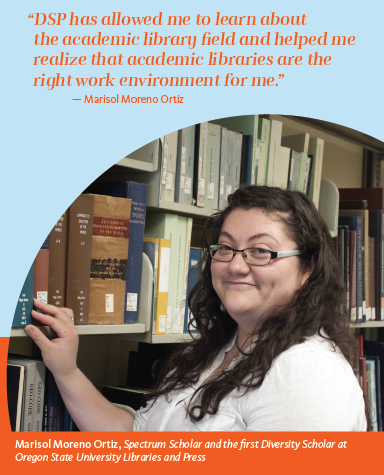 My name is Marisol Moreno Ortiz and I like it when people call me Mari. I am the youngest of three daughters and I was born in Mexico. I moved with my family to Oregon in 2000. I am the first one in my family to go college. I earned a Bachelor of Arts in English from Oregon State University in 2014, a Master of Arts in English from Portland State University in 2016, and I have now finished my first year of my Master of Library and Information Science at Louisiana State University with a expected graduation date of 2019. Being the first Diversity Scholar of the Diversity Scholars Program has been a great honor and has become a very important part of my education and growth. Doing my MLIS program has been a good experience but being part of the DSP program has made it great. I am learning in the physical environment that I hope to work in after I am done with my degree and this experiential learning is unquestionably very valuable. It has helped me begin to develop my identity as a librarian and reflect on what I want that to be. I believe in equality, equity, everyone's right to peace, support, fair treatment, a place to feel safe, and have access to information. As a librarian I hope to bring support and encouragement to students to help them succeed in their higher education plans through accessing library services.

I am also a writer, poet, and dreamer. I have many favorite authors, from William Shakespeare, John Milton, Robert Frost, Sarah Manguso to Mary Oliver, and many more. I connect to poetry that makes me reflect on my own life with the many sorrows and joys I have experienced throughout it, which is also reflected in my poetry.