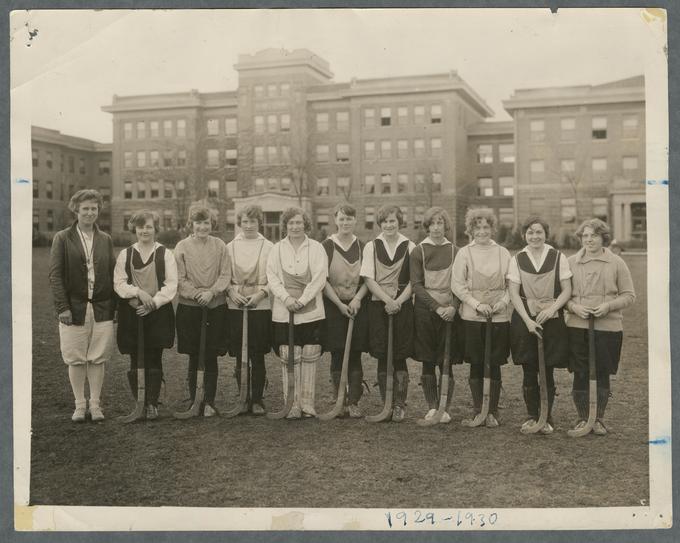 George Edmonston, Jr. Collection, 1907-2011
The George Edmonston, Jr. Collection primarily consists of materials collected and generated by Edmonston over the course of his nineteen years (1986-2005) as editor of the Oregon Stater alumni magazine, during which time he wrote dozens of articles on the history of the university. The collection includes original and reproduced photographs and other primary sources used by Edmonston in his research and writing on OSU and the Willamette Valley. Boxes 1 and 2 contain subject files and images of Oregon State basketball teams and individual players.

Beth Russell Papers, 1941-2005*
The Beth Russell Papers consist of memorabilia collected by Russell and reflecting her undergraduate experience at Oregon State College and a trip to Alaska taken in 1941. An addition to the Beth Russell Papers (Accession 2012:051) is made up of artifacts, photographs, and publications collected by alumna Russell that document OSU athletics, campus art exhibits, and Russell's membership in the Sigma Kappa sorority. The publications include a OSU basketball yearbook, an OSU athletics guest guide, an OSC songbook, a Sigma Kappa songbook, and art exhibit announcements.

G. Herbert Root Photograph Collection, ca. 1891 - 1936
The collection consists of photos acquired by G. Herbert Root, who attended OAC in the early 1900s. The photos are primarily of students, athletes (football, men and women's basketball, track) and faculty members, taken between 1902 and 1908. Many of the photographs were taken by William G. Emery, a Corvallis studio photographer and 1883 Oregon State graduate. Images 59-61 (Box 01) are of the OSU Women's basketball team in 1905. This collection has been digitized and is available online.

Charles Leon Robinson Photograph Album, 1912-1916
The Charles Leon Robinson Photograph Album was assembled by Robinson and documents his student years at Oregon Agricultural College. The album includes 212 photographs and several ephemeral items. A variety of athletic events and recreational sports are depicted in the album, including football, basketball (Box 01) (men's and women's), wrestling, tennis, track and field, canoeing, and baseball.

Bertha Andresen Photographs, 1902-1911*
The Bertha Andresen Photographs consist of one mounted photographic print and 10 postcards of the Oregon Agricultural College (OAC) campus and students. The postcards include images of several campus buldings or structures, including Alpha Hall, the fountain on lower campus, and the Armory (now McAlexander Fieldhouse); the 1910 graduating class; 1911 commencement activities; the OAC cadets in the 1911 Portland Rose Festival parade and drilling on lower campus; and the 1907 women's and men's basketball teams (Box 01).

Please note that links listed below are "canned searches" for specific content relating to women and the subject.