Food Writing in the Main Collection

Searching the Main Collection of the library is extremely beneficial for sources. Though the terms and searches may not be painfully obvious in the beginning, the deeper you dig, the better the finds! It's also important to note that there is a large amount of publications and periodicals on the first floor of the library. If you're unsure of where to look or how to look, don't be afraid to ask a librarian for research tips.

Things related to Food Writing (cookbooks, food management, food magazines, etc.) can be found here on the first floor (the areas with a yellow box): 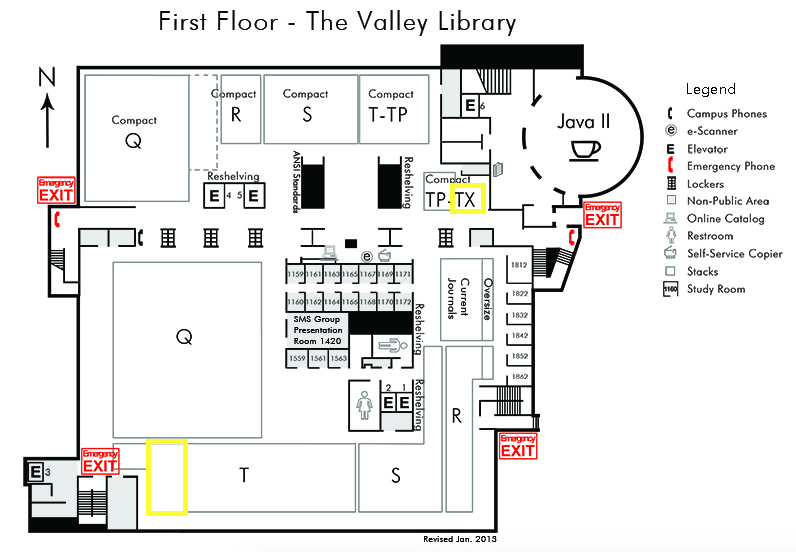 Some interesting food books that we found on the first floor: 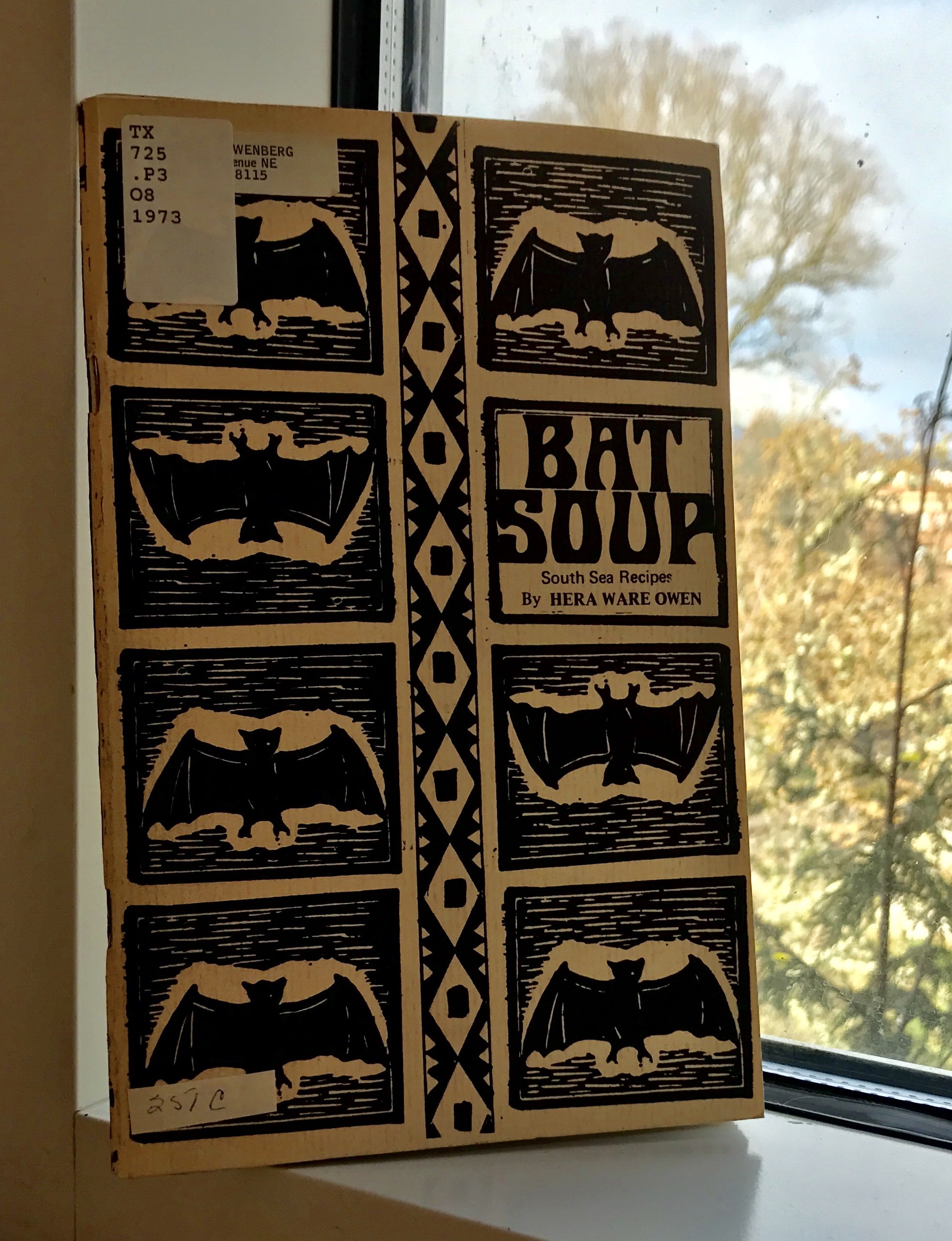 For more recipes, you can always refer to the Recipes and Cooking tab that highlights what's in the Main Collection, Special Collections, Rare Books, as well as ScholarsArchive@OSU.

Some interesting collections in ScholarsArchive@OSU include:

*The more specific your search is in ScholarsArchive, the better the result. It's also important to search with "Oregon State University" as well as "Oregon State College" or "Oregon Agricultural College."

The Edna P. Amidon Papers are comprised of materials relating to Amidon's efforts as an international leader in home economics. Included are materials documenting her work as Regional Agent (1929-1938) and Chief (1938-1964) of the Home Economics Education Service, particularly during the Great Depression and World War II; drafts of speeches and publications given in support of home economics; records of professional activities in Germany (1947), Sweden (1947), and France (1954); professional literature; and biographical materials.

Of note in the collection are Series 1 and 3. Series 1 contains drafts of speeches, reports, and publications authored by Amidon, including an annotated typescript of "American Women: Education for Family Living". Series 3 is comprised of home economics literature collected by Amidon. Included are pamphlets and booklets from the U.S. Office of Education ("School Children and the War" and "Family Saving and Spending in Wartime"); U.S. home economics programs ("Measuring Home Management" and "The History of Home Economics"); France ("Feminine Work and Work at Home" and "Rational Construction of a Home"); and Sweden ("The Postwar Programme of Swedish Labour" and "Social Benefits in Sweden").

The Brewing and Fermentation Collection consists of materials collected by the OSU Special Collections and Archives Research Center pertaining to the history, growth, and culture of the Pacific Northwest brewing industry, including regional hops and barley farming, commercial craft and home brewing, and craft cider and mead. Series 2 of the collection includes magazines, newspapers, by-laws and newsletters covering content about beer culture, brewing and hop cultivation ranging from 1933-2016. ​

Series 1 includes papers and materials related to articles and books written by Fred Eckhardt. A prolific writer, Eckhardt contributed to numerous industry periodicals, many of which he produced and published himself. In addition to drafts and final copies of Eckhardt’s written works, this series encompasses administrative files, graphic templates, promotional materials, and correspondence. Eckhardt’s most recognizable books, A Treatise on Lager Beer and The Essentials of Beer Style are featured prominently. This series also includes self-published periodicals like “Listen to Your Beer,” “Amateur Brewer,” and “The Subject: Beer.”

Series 3 contains industry publications not published by Fred Eckhardt. Newsletters from regional organizations and homebrew clubs feature prominently in the collection, as do industry periodicals on the health benefits of moderate drinking. Some information on the wine industry is also included.

Godfrey R. Hoerner earned his degree from Oregon Agricultural College in 1916 and was a faculty member at Oregon State College from 1931 to 1959. The Godfrey R. Hoerner Papers consists of photographs, news clippings, and publications from Hoerner's student years at Oregon Agricultural College and the University of Minnesota, as Oregon State College's Extension Specialist for Hop Production, and during his four-year tenure working at the Kasetsart University in Thailand.

Series 2 includes photographs showing Hoerner as a speaker at brewing conventions and in hop fields; USDA displays in Oregon, New York, and Illinois; and group portraits from brewing conventions in Oregon. Also included are news clippings and other publications such as the 1952 Yakima Golding Hop Farms (illustrated presentation of hop farming) and 1955 Hop Reporter by John Haas, and the 1953 The Brewers Digest: 20 Years of Brewing Progress 1933-1953 (issue commemorating the 20th anniversary of repeal). Clippings include hop prices from 1920 and the 1956 Oregonian Blitz-Weinhard 100th Anniversary Edition: A Century of Brewing in Oregon.

The Ava Milam Clark Papers document Clark's career in the field of home economics, her role as Dean of Home Economics at Oregon State College from 1917 to 1950, and her international activities as a consultant to home economics programs in China, Japan, Korea, Iraq, and Syria. Series 4 of the collection is comprised of notes, drafts, and source materials related to Ava Milam Clark's autobiography, Adventures of a Home Economist, published in 1968 by Oregon State University Press. With co-writer J. Kenneth Munford, Ava Milam Clark wrote a compelling and detailed autobiography including excerpts from her "diary letters" of travel and other extensive documentation. The source materials in these files are comprised of correspondence, clippings, offprints, notes, newspapers, publications, transcripts, and other original documentation from the time period of the relevant chapter.

The Hop Press newsletters, prepared by Hop Specialist G.R. Hoerner, were issued monthly by the Oregon State College Extension Service as a means to provide information on hops and brewing to County Extension Agents in Oregon. This informal publication provides a detailed view of hops growing and production in Oregon and the northwest for this period. Each typewritten, mimeographed, 8-page newsletter includes a variety of announcements and news items regarding hops and brewing in Oregon. The Hop Press includes information about hops growing in Washington, Idaho, and California and was distributed to individuals and organizations outside of Oregon. All issues of the Hop Press are available online.