Archival and Manuscript Collections on Food Labor and Supply 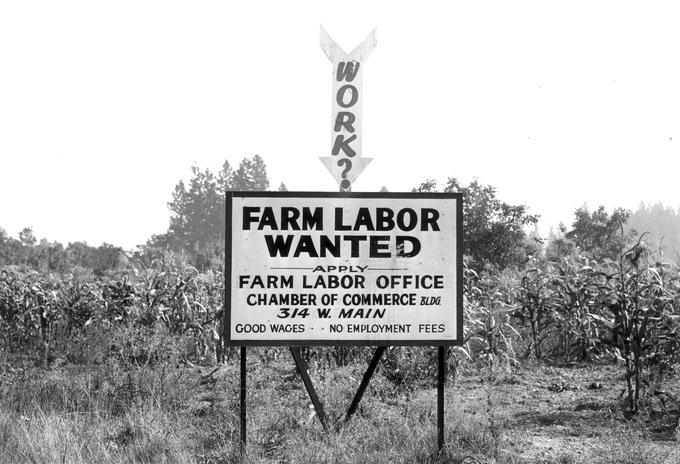 The Oregon Emergency Farm Labor Service Oral History Collection consists of five interviews conducted in 1992 of individuals familiar with farm labor in Oregon during World War II. The interviews were conducted by Oregon State University students in cooperation with the University Archives in preparation for the exhibit: Fighters on the Farm Front: The Emergency Farm Labor Service in Oregon, 1943-1947.

The Extension Service Records pertain to the administration and programmatic activities of the Oregon State University Extension Service. The records document policies and procedures, research activities, special events, and services provided to Oregonians at the state and county levels. They also document the service's relationship with the federal government and extension services in other states.This large collection has a wealth of material related to food labor and supply during World War II.

The Agricultural and Resource Economics Department Records document research, teaching, and extension activities in agricultural economics and farm management at Oregon State University and provide extensive documentation of the economics of Oregon agriculture. The records include administrative materials, speeches and presentations, reports and original data for studies conducted by department faculty, records of the Western Rural Development Center, and extensive economic and statistical data on agriculture in Oregon assembled by the Oregon Agricultural Information Network (OAIN). Box 32 covers the Emergency Farm Labor Program in 1943.

The Extension Bulletin Illustrations Photograph Collection consists of images (primarily black-and-white photographic prints) that were created and assembled for use in Oregon State College Extension Service publications and county reports. They document extension activities in agriculture, home economics, and youth programs. Of particular note are images of the World War II period including Bracero and other farm workers in the Emergency Farm Labor Service; other wartime extension activities; and the relocation of Japanese-Americans residing in Oregon. Search the preliminary inventory for keywords such as migrant, labor, Mexican, or camp.

*Also highlighted in this finding aid in the "Related Materials" are references to various agriculture publications.

Several groupings of photographs were made by/for the Extension Service and the Agricultural Experiment Station, and depict the Emergency Farm Labor Service and Branch Experiment Station buildings and activities. Agricultural activities shown on campus include brooder houses, chicken coops, farm machinery classes, and the dairy barn. A small number of photos scattered throughout the collection were made by the USDA in Oregon around 1910. Approximately 92 photographs were probably collected by Wallace Kadderly for use in Western Farmer magazine, and include images of dairy and beef cattle, Canadian agriculture, groups of agricultural editors, and barns. Photographers, when known, are indicated next to each image listed in the inventory. Series II covers the Emergency Farm Labor program.

Keywords that can be searched in the SCARC collections:

Labor and Food Supply in the Main Collection

Labor and Food Supply in ScholarsArchive@OSU